We left our daughter’s home in Land O’Lakes, Florida early one February morning to travel eighty-six miles north to a delightful Japanese-style garden near Williston. Not far from our destination, we drove through a dense southern pine forest reminding me oddly of the southern entrance to Yellowstone National Park 8,000 feet higher. A bit later we passed by open fields and pastures that resembled the rolling terrain of eastern Iowa.

Soon afterwards, we found ourselves driving along a winding, bumpy dirt road that eventually led us to Cedar Lakes, Woods and Gardens, a preserve established in 2014 (through the efforts of Dr. Raymond Webber) at the site of abandoned limestone quarries over a hundred years old, the limestone having been used as a key ingredient for cement production. But now, there was not a trace of the commercial or industrial use of this land.

Maura, our daughter Maureen, a close friend and I entered the preserve to fall under the spell of Japanese memories when we lived in Japan forty years ago. Deep down in the quarry lake, stood Japanese-style pavilions, seemingly floating on the water. We walked along the rim trail fringed with cedars and pines and bright red tsutsuji(azalea) bushes. A brown and white squirrel perched himself on a dark limestone rock before us and nibbled on pine nuts gathered from a cone.

Far below us sailed black crows above the pavilion roofs as waterfalls splashed down the steep cliffs.

As we ascended the trail, we spotted a bright red torii (Japanese archway) and we couldn’t help but think of our ascent through many torii on the pathway to the summit of Mount Fuji. Then, we had a choice of staying on the rim or of descending to the quarry lake and its pavilions. We all chose to walk down a steep trail to the lake where we crossed a bright red, arched hashi (bridge) that led us to a small island covered with a fantastic grove of take-ya (bamboo) that convinced us that we had never left Japan. A cedar wax-wing bird flew past to break the spell.

After crossing another bridge and a bevy of paddling white ducks, we headed back up to the rim of the quarry to catch of breath at a rust-colored jinja (shrine) perched at the edge of a cliff without, of course, Shinto monks, though we imagined that we heard chanting. From here we continued our dream-like stroll into a garden of miniature momiji (maples) where we admired these leafless tress amid bright blossoms of hibiscus flowers. We sat down on wooden benches to share our memories of living in Nigawa, Takarazuka-shi in southern Japan.

We lingered briefly in a citrus orchard with numerous lime trees, and proceed to the exit of this wonderful preserve in the midst of old limestone quarries that cemented not physical structures of this world, but thoughts and memories in the depths of our minds.

Hi, David. Our excitement is building for our adventure with you – I can sense it in all our emails to each other. Below are questions from the... 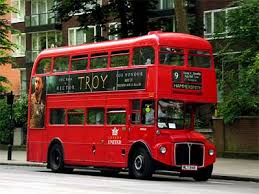 Whenever I visit London, I feel slightly guilty. As only a mother can, London makes me feel as if I should visit more regularly, call more often...