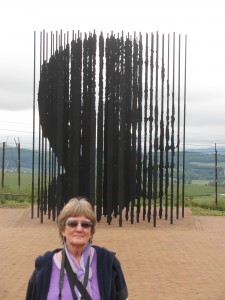 About an hour’s drive north from Durban, the world’s only monument to a criminal arrest—that of Nelson Mandela—can be found near the village of Howick. The village is also famous for its waterfall, one of the highest in Africa. Both are free, although there have been rumors about charging an entrance fee for the Mandela Capture Site.

While en route to the Southern Drakensberg Mountains for a family getaway, you can visit both the falls and the monument, plus the Midlands Meander, a special driving route in the Natal Midlands (see here for the Mandela Capture Site:

Howick Falls on the Umgeni River: The gorge of the falls is very deep and rocky (with many rock climbers and abseilers) and lined with green bushes. The actual falls are very long, but narrow, and can be disappointing if you go in winter when the volume of water is low. They are not so impressive if compared to other falls in the world.  But, they are pretty anyway, and the legends surrounding them are interesting. 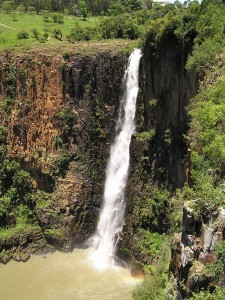 The Legend of the Falls gives a fascinating glimpse into Zulu culture. These falls, known to the Zulus as kwaNogqaza (the tall one), are one of the major tourist attractions of the Kwa-Zulu Natal Midlands. Local Zulus believe the Falls to be the abode of spirits and a giant, eel-like creature known as inkanyamba. Zulu sangomas (witch doctors or diviners) come to the falls to pray and offer sacrifices of chickens and goats to inkulunkulu (the Great God), to the amathongo (spirits of the ancestors), and to the inkanyamba.

The falls viewing platform can get quite crowded, especially at weekends, and buskers may entertain you (the Sunday we were there, two young men were playing violins). Just above the falls, a black lady was doing her laundry in the river, seemingly unconcerned by all the people ogling her. It was fascinating to witness this one example of local life continuing in spite of modern development. 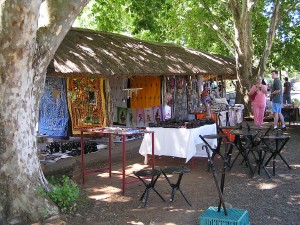 Some of the lovely outdoor craft stalls

The falls are special too because they are so close to the center of Howick town—a few minutes walk at most. Along the road behind the falls are many craft shops, simple craft stalls, people selling big bowls of mangoes and lychees, a couple of restaurants and tea shops, and a well-stocked Tourist Information Office. The selection of crafts is reasonably good (just check that they are made in South Africa!), and prices are not bad, especially for the cloths and wall hangings with traditional African patterns and motifs. Note the shell shop, which has all kinds of shell articles, plus you can buy shells to make your own necklaces or craft items.

When we were there, Yellowwood Café was a nice place to stop for a snack lunch, sitting outside under a huge flamboyant tree, soothed by the sound of falling water. 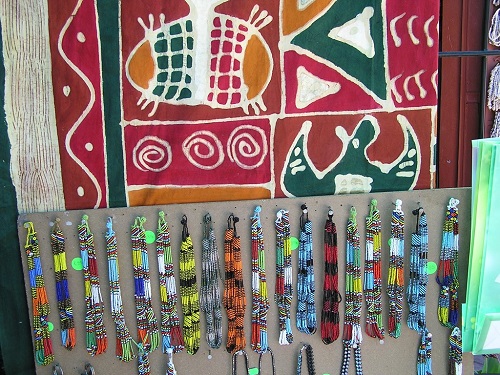 The Midlands Meander is a well-organized system of drives in this pretty countryside, its symbol the Butler butterfly, found only in the Karkloof region. It extends about 80 km between Pietermaritzburg and Mooi River and can be approached from many different points. It began in 1985 when several potters and weavers came together to create an arts and crafts route through the region. Today, the roads meander between small towns, with a focus on around 150 special craft shops, tearooms, restaurants, craft and potters’ stalls, art galleries and studios. For example, we noted a goat farm that makes goat cheese, called Swissland Cheese; and a German restaurant, called Bierfassl. But, shops come and go so check with the Tourist Information Office first. The Midlands Meander also offers active outdoor activities, like horse riding, hiking, tubing, swimming, biking, canopy tours, and fishing.

This is a pleasant gentle way to see a bit of this countryside—green, rolling, soft, pastoral, which some liken to parts of England. The names of the towns even sound a bit English—Tweedie, Lidgetton, Balgowan, Nottingham Road.

You can get a map either in Pietermaritzburg or Howick, and then follow the brown road signs. (But, note that the map isn’t 100% accurate and doesn’t mark all the small roads). 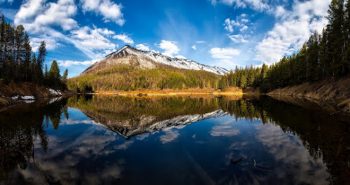 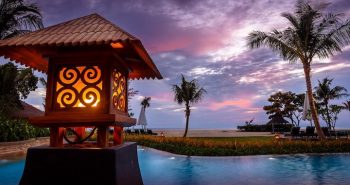 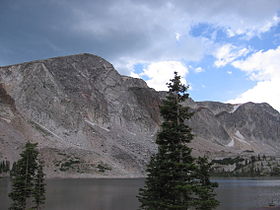 The climber is given key information about the Lewis Lake Trail to the summit of this snow-lined peak at 12,013 feet, the highest point in southern... 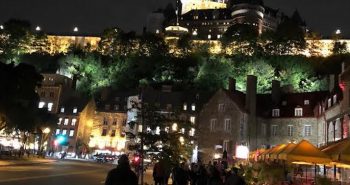