Sometimes it’s nice to visit a well-known city, like Paris, London, Rome, Berlin, Tokyo, or Jerusalem. Yet, at times it’s fun to visit one that’s not at the top of all the tourist lists. That way, you have a great opportunity to see new buildings, lovely architecture, and historical sites without the sometimes-oppressive crowds. Such is the case with Luxembourg City. Most people have heard of Luxembourg, but not that many have actually visited or considered visiting, as it’s not usually on the beaten track. 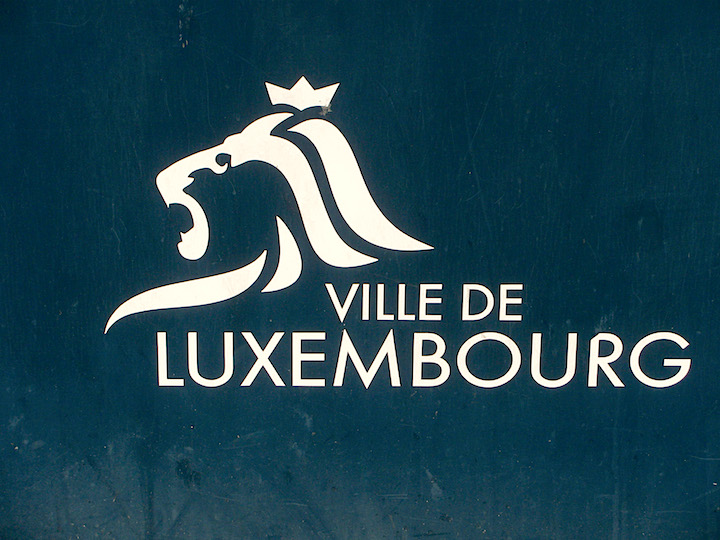 We were there earlier this year for a conference, and I’ll share our great, self-guided walking tour. You’ll get a good idea of the lay of the land, with picturesque squares, narrow lanes and stately old buildings. But first, a bit of introduction.

This is the world’s only Grand Duchy and the capital, Luxembourg City, has been on UNESCO’s list sine 1994. Along with Brussels and Strasbourg, it’s one of the EU’s main cities and the seat of important European Institutions. Luxembourg was a founding member of the EU and hosted much of the Europe integration process. In addition, one of the founding fathers of the EU was born here: Robert Schumann (1886-1963), who spent most of his life as a French statesman. Schumann gave a special speech on May 9, 1950, on the principles of supranational democracy, now known as the Schumann Declaration. 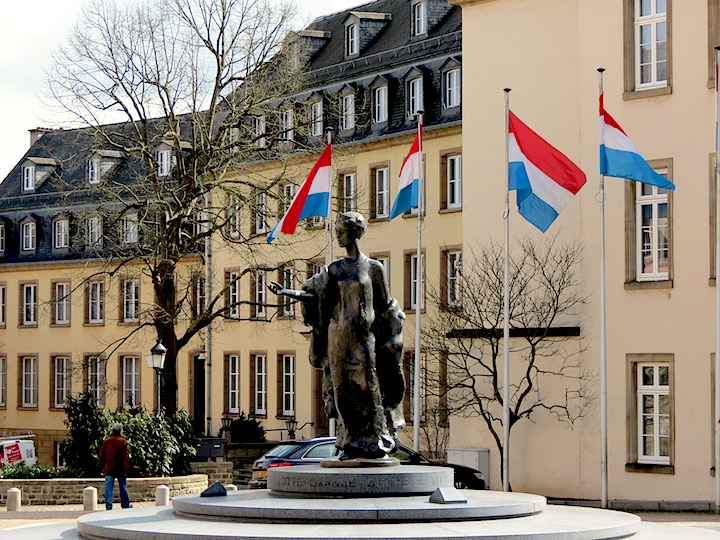 Luxembourg’s a fascinating mix of the very old, reaching back 1500+ years, and the very new, a contrast of traditional and international, cosmopolitan flair. As a result of the EU and Luxembourg’s turbulent history, you’ll hear an amazing mix of languages, reflecting its diverse and multicultural population. The official languages are French, German and Luxembourgish, a very unusual language that is Germanic in origin with an interesting blend of German and Dutch. Many people also speak English.

Our hotel was near the Central Station, and a walk to the Old City affords wonderful views and an immediate appreciation for the complex and unique geography of this area, along with the positioning and development of the city. 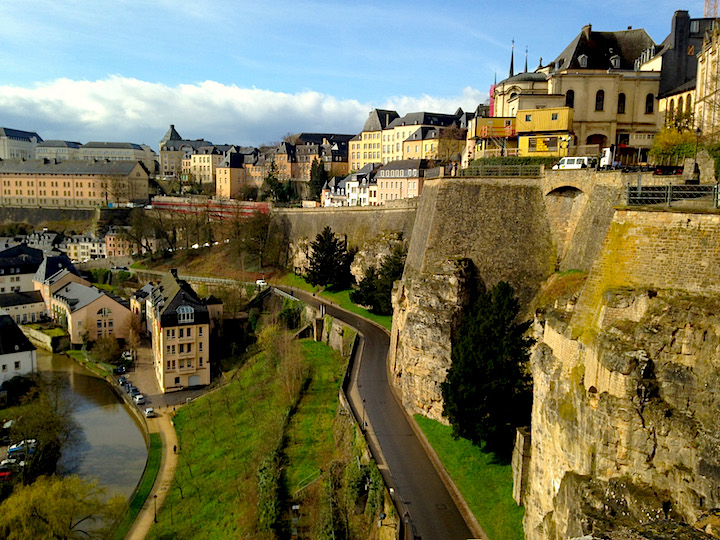 First, imagine the River Alzette coursing its way through the ages, slowly creating gorges in a backwards S-shape. Then, add its tributaries, which also meandered and forged gorges before joining the Alzette at the bottom of the “S”. What you now have are many spits of high land overlooking wide valleys. Old Luxembourg sits on three of these spits, on both the upper and the lower (river) levels. The newer town and quarter with the EU institutions are in Kirchberg, northeast of the Old Town, connected by the Charlotte Bridge and a large, new avenue. Parts of the gorge walls are extremely rocky and formed cliffs used for defense. It’s no wonder that the city was often called the Gibraltar of the North. 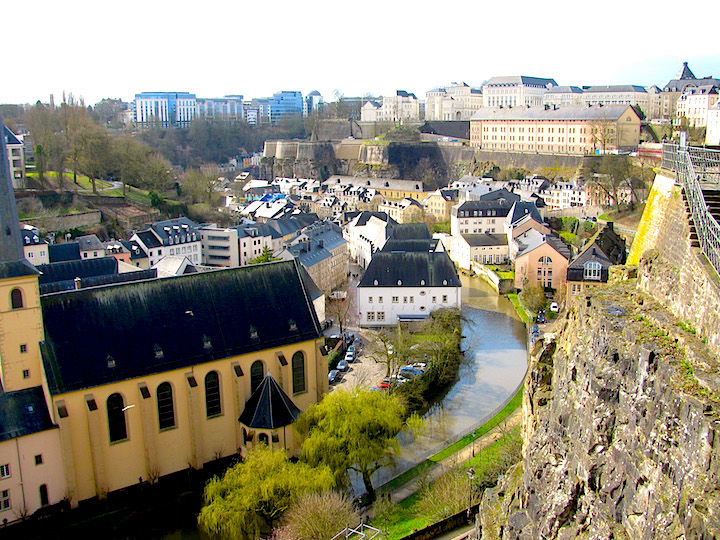 The fortified towers, bastions and ramparts still define the view of the Old City today. First the Romans came and later, because this is at a crossroads in Europe, others also vied for supremacy. What we see today are the footprints of military engineers from Burgundy, Spain, France, Austria and Prussia, which turned it into a major, European stronghold.

Old Luxembourg City is fairly compact, but it can be quite confusing at first, as there are many small cobblestone alleys between both older and newer grand buildings, which are mainly for government business. Some are on different levels, so you’re not quite sure where you’ll end up. Yet, that’s part of the fun of exploring. 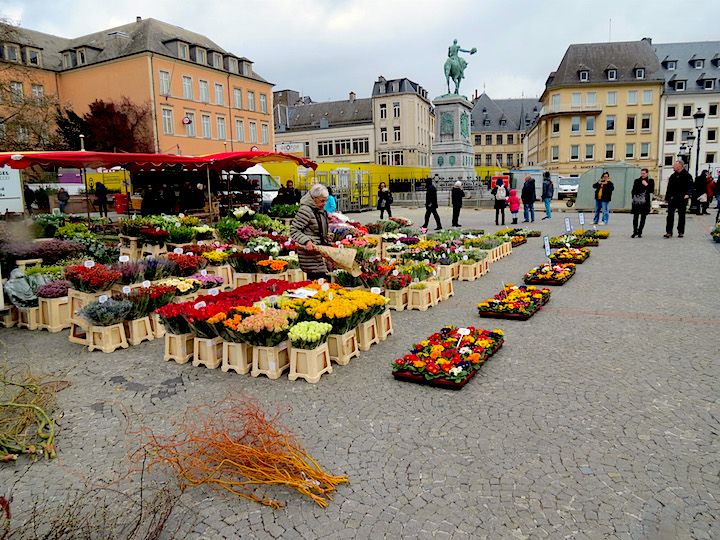 Armed with a city map, start our recommendable, self-guided walk in the morning at the station, south of the Old Town. Albeit an easy walk, it can take up most of the day. However, the time spent exploring also depends on how often you stop, and if you take time to visit any of the museums and churches along the way. Such a tour first provided us with a wonderful overview of the city, and we later returned to spend more time in the top sites on the following days.

A long viaduct, called the Passerelle (a mighty bridge with 24 arches built between 1859 and 1861), spans the Petrusse Valley, and joins the station area with the Old Town, providing lovely views of both sides of the valley and some of the rock cliffs. Other large bridges also cross the valleys and river at different points, such as the Adolphe Bridge. This particular bridge, which once boasted the largest stone arch in the world, makes transportation relatively easy; however, one can only imagine what a long journey it must have been to climb down one side and then back up the other before its construction in 1903.

After strolling across the Passerelle and along Blvd. Roosevelt, we passed the cathedral and reached Constitution Square, with the “Gelle Fra” Memorial and nice views of the Petrusse Casemates, built during various foreign domination, and the Adolphe Bridge. The “Gelle Fra,” or “Yellow Lady,” which dates to 1923, commemorates the Luxembourgers who died in WWI. Today, it symbolizes freedom and resistance. 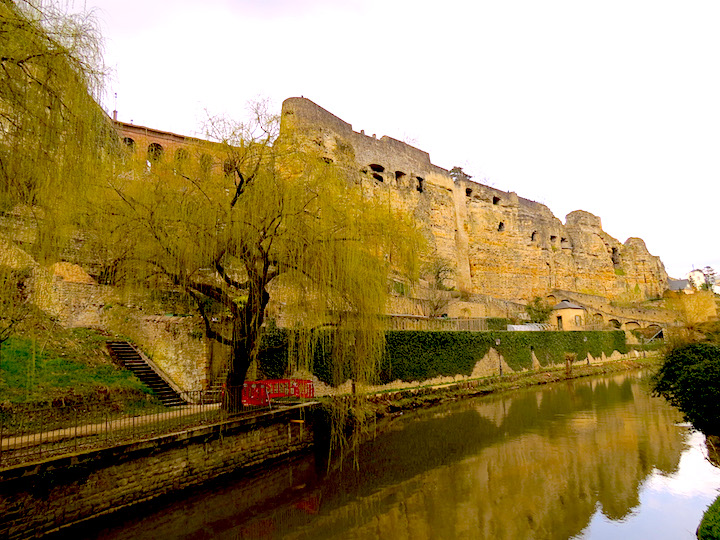 Continue onward a few blocks to the Place d’Armes, also called “Parlour of the City.” The Cercle Cité is a lovely administrative building that overlooks this square and further hosts film festivals and special exhibitions. The Dicks-Lenz Monument from 1903 pays tribute to the two national poets, Dicks and Lenz. The location is a great spot for lunch, with many choices from fast food to fancy. On various days we ate at Café Française, Café de Paris, Banana’s, just off the square, and La Boucherie. 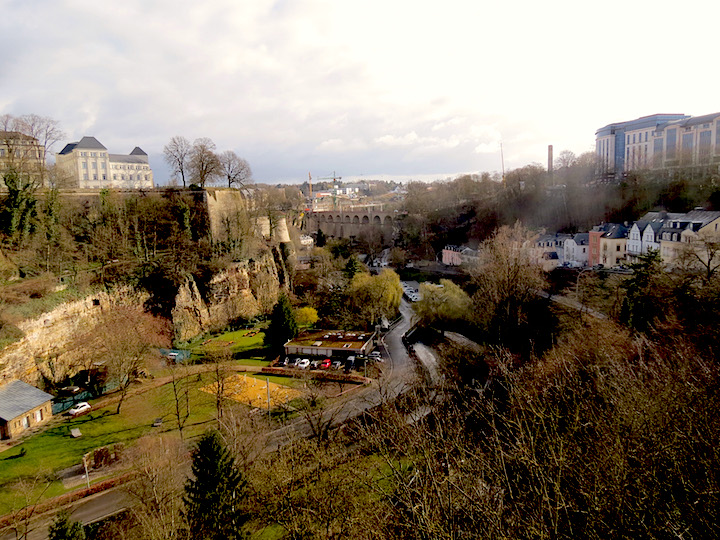 Next, stroll through the arcade that leads from Place d’Armes to Place Guillaume (William Square), named after William II of Orange-Nassau, King of the Netherlands and Grand Duke of Luxembourg.  The large equestrian statue of William II, designed by French sculptor Antonin Mercié, pays tribute to the sovereign who ruled from 1840 to 1849 and further granted the Grand Duchy its first parliamentary constitution. The Town Hall (Hotel de Ville), built in neoclassical style in 1838, is the prominent landmark here and stands on the site of a former Franciscan convent. Next to it is the monument dedicated to Luxembourg’s famed writer Michael Rodange. The sculpture of a fox on top reflects the main character in his best-known work Renert. 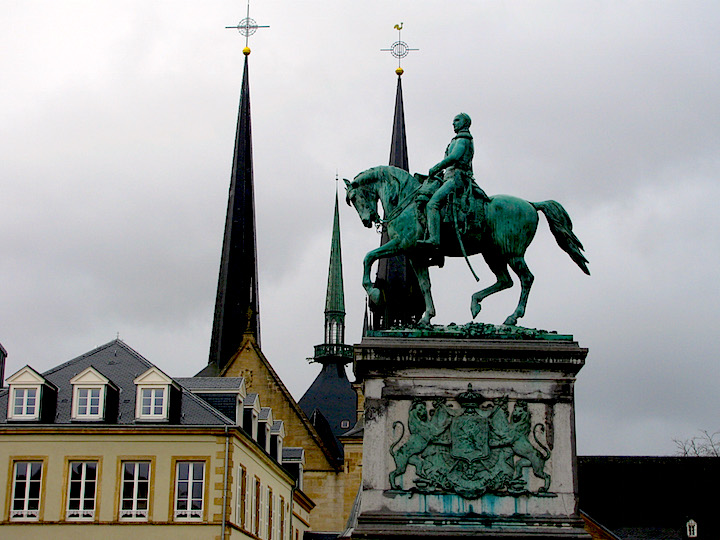 The Luxembourg City Tourist Office (www.lcto.lu ) is here as well, along with some cafés and restaurants. This central location also sets the stage for the weekly market on Wednesdays, when trucks and stalls sell cheeses, fruits and vegetables, jams, herbs, flowers and plants. What an amazing setting for such a display!

The city also has a thriving and dynamic music scene, with many free, often open-air, concerts, such as in the music kiosk in Place d’Armes, Place Guillaume, the Notre Dame Church, and in the parks.

Close by is the Palace of the Grand Dukes, which is next to the Chamber of Deputies. The Baroque and Renaissance façade is one of the most beautiful in the city. The soldier on guard marches every hour to the delight of tourists! Luxembourg’s Grand Ducal family is still very popular, and their residence is open to visitors only from mid-July to early September. The very interesting Musée d’Histoire de la Ville de Luxembourg is also nearby and very much worth a visit. 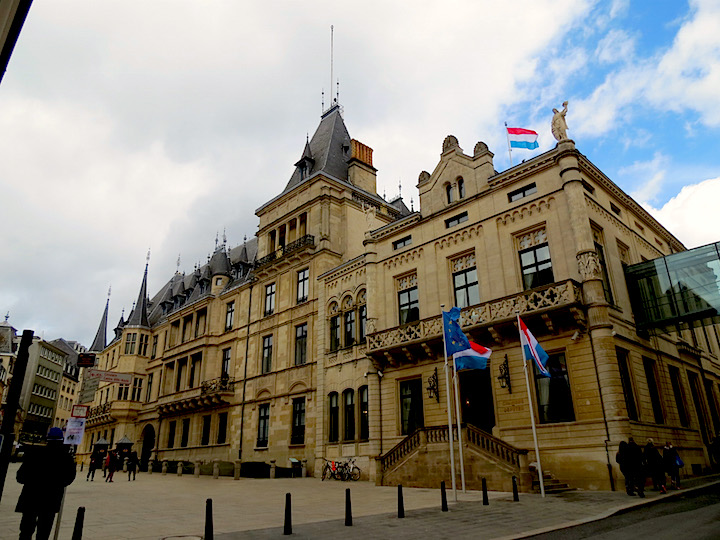 Skirt behind the palace and follow the signs to the Bock Casements and the old Fishmarket, which is the historical center of the Old Town and former crossroads of two Roman roads. It now boasts restaurants and bars, many with fascinating metal signs outside. Take a quick look in St. Michael’s Church, the city’s oldest shrine from 987 AD.

Linked to the city by Castle Bridge (1735), the Bock Promontory is the cradle of Luxembourg City, and its foundation walls reflect the first stronghold of the Luxembourg counts and dukes. The panorama is amazing, including views of the Grund (Lower Town) hugging the river in the valley below. The Archeological Crypt houses the origins of the city and the underground defense works of the Bock Casements from the Spanish era (1745/6). 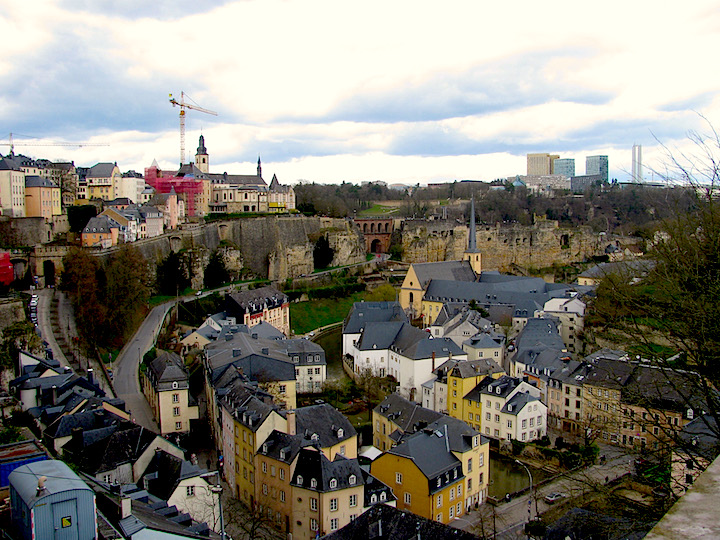 One block further from Place Guillaume is Place Clairefontaine, located at the edge of the government district and next to the cathedral. The Grand Duchess Charlotte Memorial, designed by Parisian Jean Cardot, honors the duchess (1896-1985) who ruled from 1919 to 1964. It’s very popular, as most visitors want their photo taken next to this statue of such a grand lady.

Take a peek in the Cathedral to the Blessed Virgin (1613), or Cathédrale Notre-Dame de Luxembourg, elevated to a cathedral in 1870. It’s gorgeous inside, with late-Gothic design. If you’re lucky, you may hear an organ practice or an organ recital around noon.  The crypt contains not only the tombs of bishops and the vault of the Grand Ducal family, but also that of John the Blind, King of Bohemia and Count of Luxembourg in the 14th century.

From Clairefontaine Square, follow the signs through the huge Holy Ghost Square in the Cité Judiciaire (center of Luxembourg Justice) to the elevator (ascenseur) that leads to the Grund (Lower Town). The spot also offers a wonderful panorama of the Grund below and across to the casemates. Visitors have the option either to ride in the elevator or walk down a zigzagging road, if you have enough time and energy.

Once reaching the Grund, take the bridge and go left, pass the old Abbaye de Nuemunster and head to the old stone bridge, which crosses the Alzette and leads to the Wenceslas Wall. A stroll along the riverbanks offers amazing views of the steep cliffs and the ramparts above, where you’ll likely spot visitors looking out the canon openings of the casemates. The National Museum of Natural History is in the Grund, too.

After exploring the Grund, return to the Upper Town via the elevator, at which point you’ll be ready for a drink!

This isn’t a difficult walk for exploring the city, and the maps we obtained at the Tourist Office are very helpful. Such a self-guided tour covers the main sites and presents a great overview of the Old City. When planning a visit, I suggest allowing a couple days to explore Luxembourg City, in order to appreciate the museums, churches and special exhibitions at leisure.

For more information, go to www.visitluxembourg.com

By Vivienne Mackie, In these troubled times it is even more important that we do all we can to try and promote peace and understanding between...