Deserts are wild, harsh and dramatic, yet their stunning beauty is alluring, mesmerizing and constantly changing. They’re on every continent, cover more than one fifth of the Earth’s surface (35 million sq. km) and receive less than 10 inches of rain per year. Surprisingly, 13% of the world’s population call one home. Explore them and discover what these unusual, vast expanses have to offer. 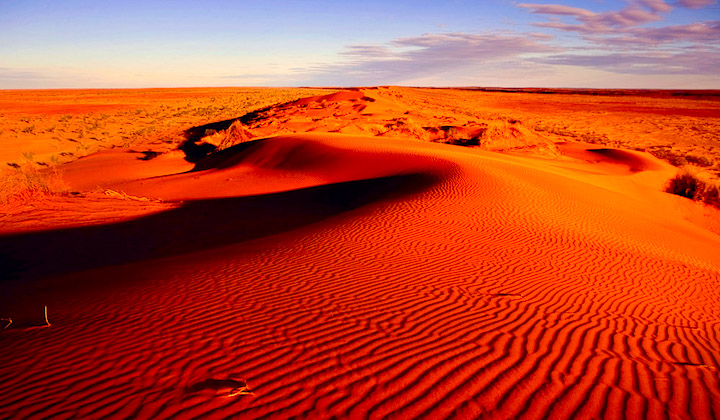 Dubbed “Big Red,” due to its colored sand, this is Australia’s fourth largest desert and a popular winter destination for tourists, who arrive to camp, hike and travel by four-wheel drive. The Simpson Desert is also home to the Dalhousie Springs in Witjira National Park and wildlife, such as emus and reptiles. During seasonal flooding, the Channel Country attracts water foul, including ducks and pelicans. As a result of the extreme hot weather and sand storms, the desert is closed from the end of November to March 16th. (Photo credit April Loy- Emaze.com) 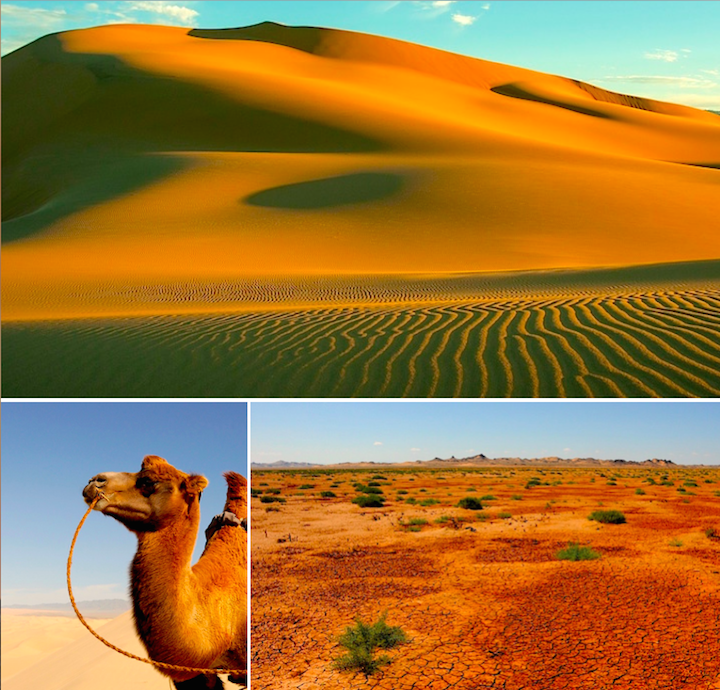 This is Asia’s largest desert and the world’s fifth largest. It extends from southern Mongolia and across northern and western China. It’s a desert of temperature extremes, dipping to -40°F in winter and rising to nearly 122°F in summer. Notably, it’s a magnet for archaeologists, who have uncovered a wealth of fossils that include dinosaur eggs. Also, as the legend goes, the Gobi is home to the “Mongolian Death Worm,” which can be between two and five feet in length and spit acid to kill its pray.

Located between the Andes and the Atlantic, Argentina’s largest desert – the seventh largest in the world – consists of tablelands and massifs, split by canyons and valleys. Although temperatures here average at about 37°F, the harsh environment is home to local wildlife, such as owls, pygmy armadillos, weasels and pumas. They say that Patagonia derives from the word Patagon, a term Portuguese navigator Ferdinand Magellan first used in the 16th century when he referred to the look of the indigenous Tehuelche Indians.  Patagon was a dog-headed monster in the Spanish romance novel Amadis de Gaula.

Sparsely inhabited by Bedouin tribes, the Rub al Khali, or the “Empty Quarter,”constitutes 225,000 sq miles of sand dunes on the Arabian peninsula, making it the world’s largest sand desert. It spans across a quarter of Saudi Arabia and stretches into Oman, the UAE and Yemen. Moreover, it’s rich in oil.  ( Photo credit,easyvoyage.co.uk) 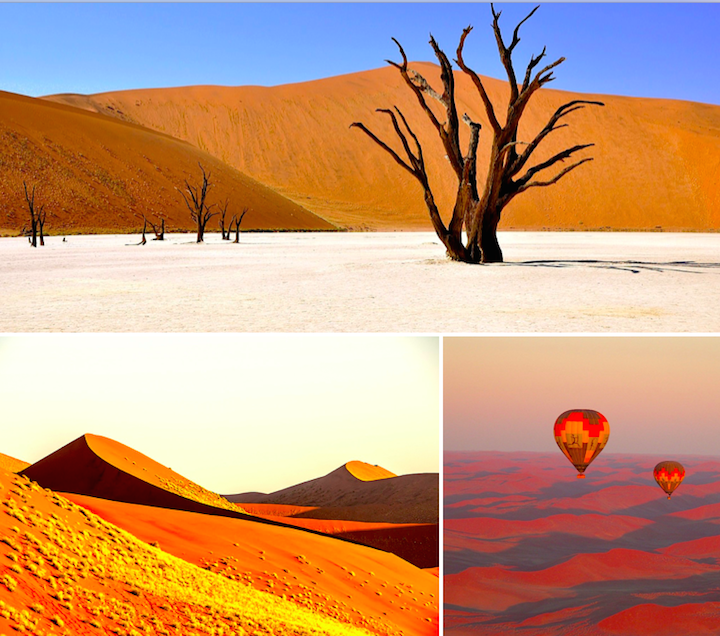 At 43 millions years old, many consider the Namib to be the world’s oldest desert, which also features the highest sand dunes. The Skeleton Coast is also part of the desert, straddling the Atlantic Ocean from southern Angola along the length of northern Namibia. Though numerous whale and seal bones once lined the shores during the whaling industry, today old shipwrecks, caught off guard by fog and off-shore rocks, rest on this barren coast. Despite its harsh conditions, the Namib is the only desert in the world to have elephants, which have larger feet for traversing the sands and get their water from the vegetation they consume. 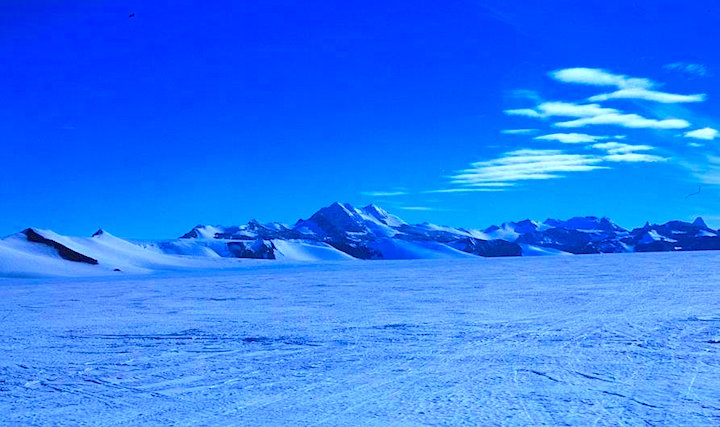 Really, the coldest place on Earth is a desert, with up to eight inches of annual precipitation on the coast. First discovered in 1820, it took another 20 years to confirm that Antarctica is actually a continent. Today, 30 countries manage 80 stations, with approximately 4,000 researchers in summer and nearly 1,000 in winter. However, according to UK, US and Australian scientists, who utilized satellite technology, estimate that there are close to 600,000 Emperor penguins to keep the researchers company. ( Photo credit-science.nasa.gov) 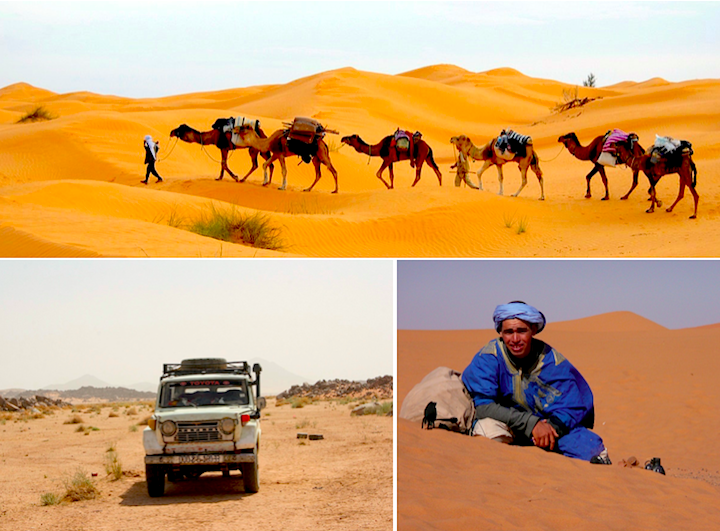 This is one of the world’s hottest deserts, with temperatures reaching 122°F.  Contrary to popular belief, this isn’t the word’s largest desert. Although it covers 10% of Africa, it ranks number three after Antarctica and the Arctic.  25% of the desert is sand dunes, some of which rise 500 feet. Humans have called the Sahara home since 6000 BCE, and around four million people live here today. 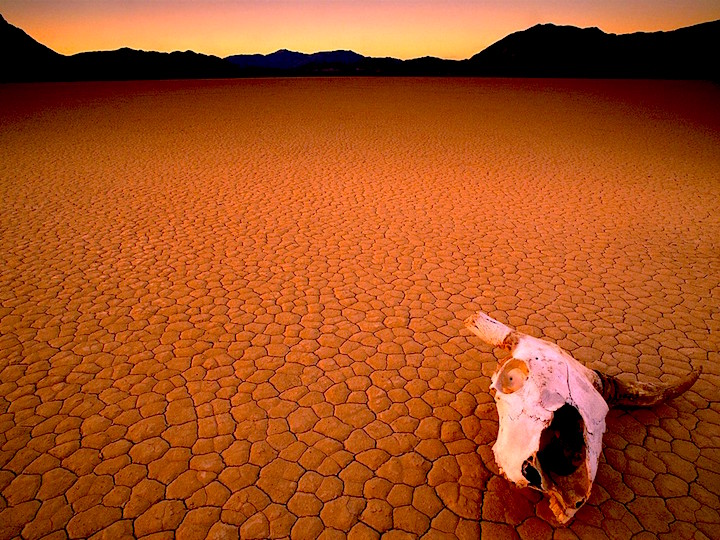 Located between the Great Basin Desert to the north and the Sonoran to the south, the Mojave is a rain shadow desert and incorporates a combination of elevation, latitude, indicator plants and geology. Death Valley National Park boasts Telescope Peak at 11,049 feet and the lowest point in the U.S. in Badwater—282 feet below sea level. The hottest temperature recorded was 134°F, which occurred in Furnace Creek on July 10, 1913. Las Vegas is largest city in the Mojave Desert. ( Photo credit-timbisha.com) 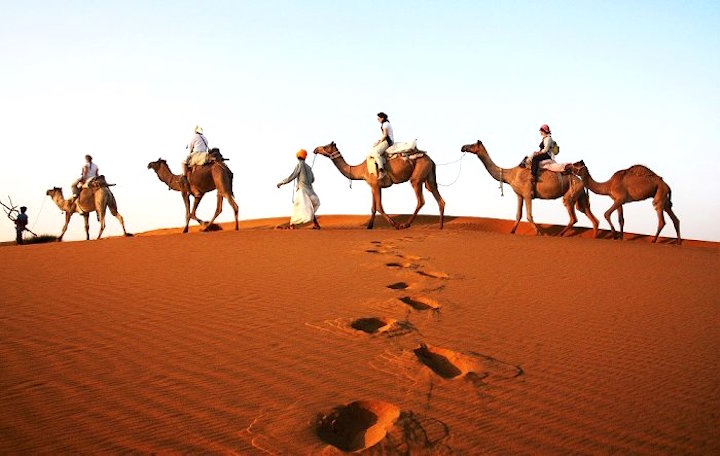 Also known as the Great Indian Desert, which receives an average of four inches of rainfall per year, the Thar is a natural separation between portions of India and Pakistan and covers 77,000 square miles. The states of Punjab, Gujarat, Haryana and Rajasthan are all part of the Thar area, where 23 species of lizards and 25 species of snakes also live. The inhabitants, who call the rural areas home, form different economic and social groups and practice Hinduism and Islam. (photo credit-thrillophilia.com) 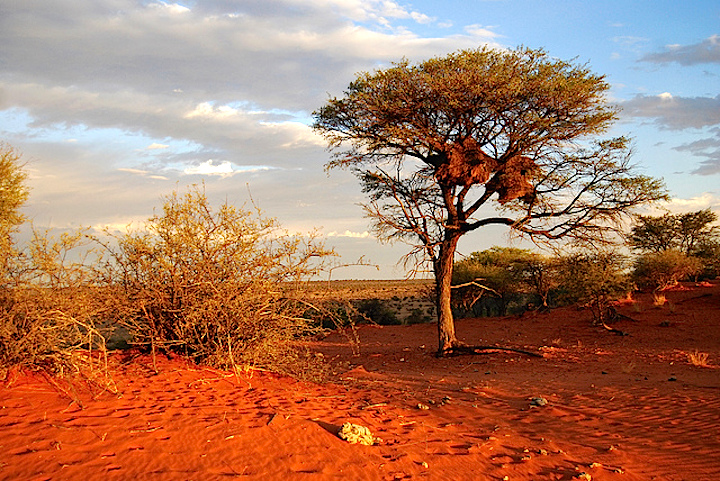 The Kalahari occupies much of Botswana, parts of Namibia and South Africa. Though its name means “the great thirst” or “a waterless place,” the semi-desert provides grazing areas to support wildlife after receiving sufficient rain. The San hunter-gatherer people have lived in the Kalahari for 20,000 years, and they share it with hyenas, lions, meerkats, giraffes, warthogs, jackals, baboons and antelope. ( Photo credit-kalaharidesert.net) 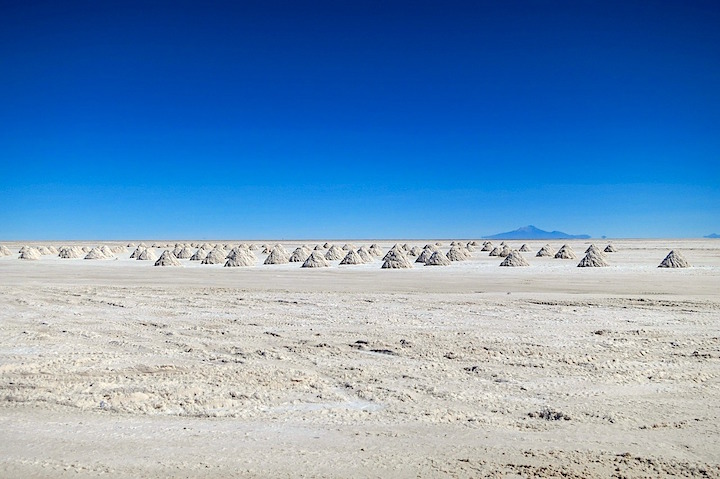 The Atacama in western South America extends into Peru, Bolivia, Argentina and Chile. At 400,000 sq. miles, the desert consists mostly of salt pans and sand. It’s the driest desert in the world, with an annual rainfall of about 0.039 inches; yet, some areas have never received any rain. The total dryness and the lack of any vegetation provides great filming locations for movies, such as Quantum of Solace, Spy Kids and Space Odyssey. Near the town of San Pedro de Atacama, the Valley of the Moon (Valle de la Luna) provides an unparalleled scene of light over the lunar-like landscape at sunset. 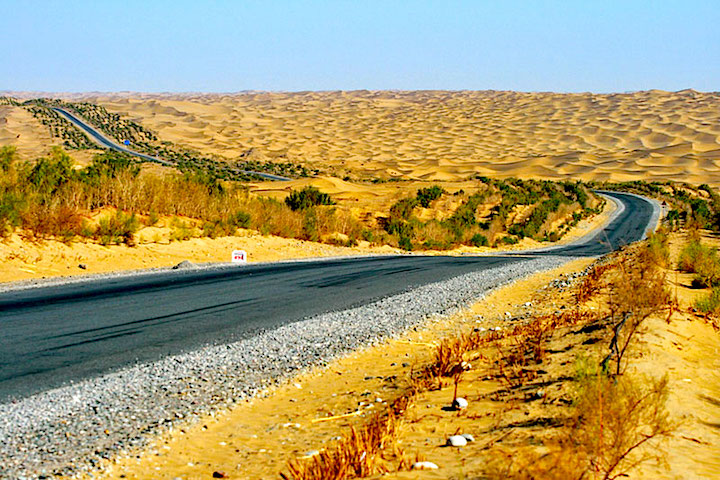 Caravans that once traversed the Silk Route used to skirt along the western and northern peripheries of this vast desert in western China. Though precipitation is extremely low, the western area receives an average of 1.5 inches of rain, while only 0.4 inches fall in the east. Vegetation is sparse, yet there is some along the fringes of the Takla Makan, where the sand dunes meet the river valleys and deltas, and where groundwater is close to the surface. 85% of the desert is shifting sand dunes, making it the second largest of its kind in the world. ( Photo credit-natureflip.com) 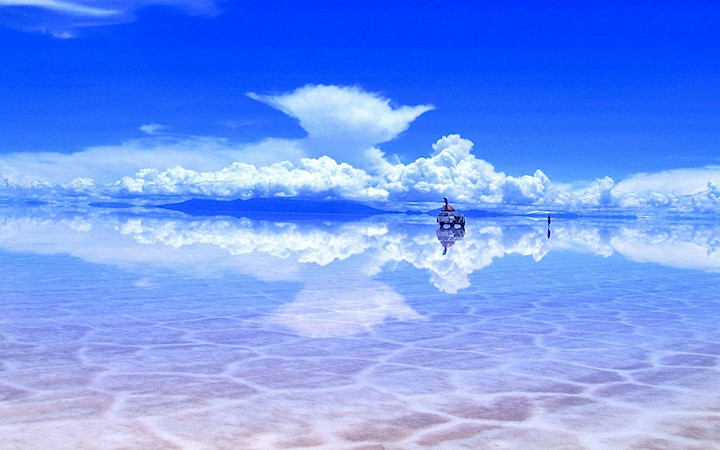 Situated in western Bolivia at 11,985 feet above sea level, this is the world’s largest salt flat, containing over 10 billion tons of it across 4,633 sq. miles. 40,000 years ago this area was part of Lago Minchín, a prehistoric lake that dried up and left a couple of seasonal puddles and several salt pans, including Salar de Uyuni. It’s also part of Bolivia’s Altiplano, where transportation routes crisscross the region. ( Credit-huffingtonpost.com) 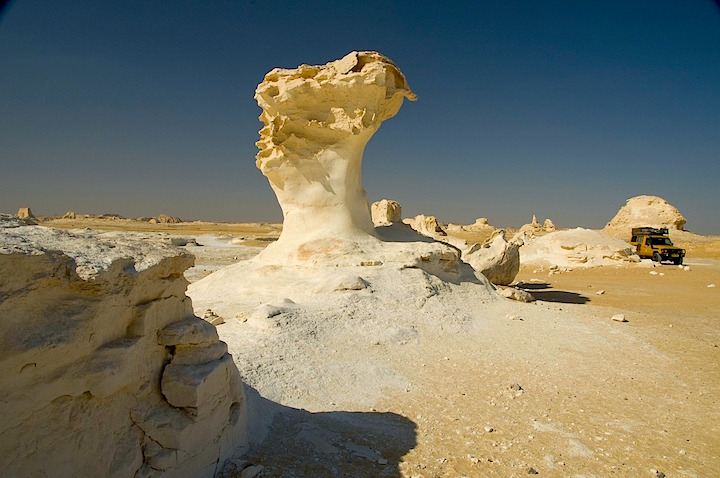 The White Desert boasts an unparalleled landscape, consisting of mushroom-like rock formations in creamy-white colors. Once a Roman outpost along this east-west caravan route, Qasr al-Farafra is the most remote of the Western Desert’s oases and is the closest town in this far-flung area where Libyan and Bedouin tribes make up the population. 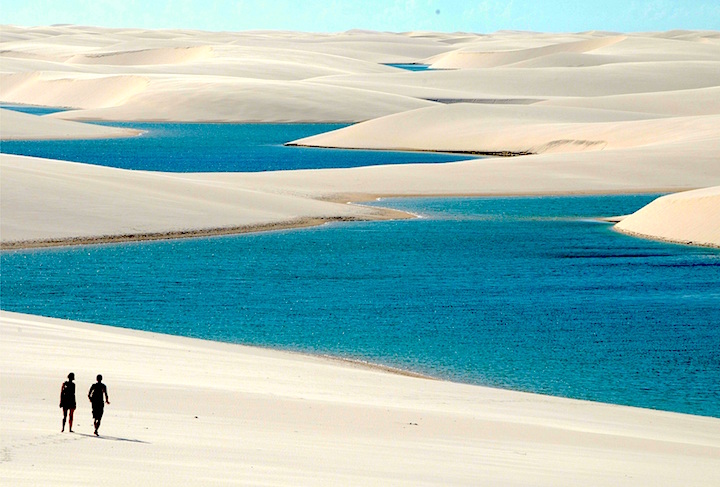 Located in Maranhão, in northern Brazil, this is the country’s ephemeral desert and one of the most beautiful places on Earth. Despite its desert-like appearance of shimmering white sands, Lençóis Maranhenses, which means “bedsheets of Maranhão,” records an annual rainfall of 62.9 inches, 300 times more than in the Sahara; thereby making it too rainy to be officially a desert. After the rainy season from January to June, the turquoise lagoons can be 300 feet long and up to 10 feet deep, enabling them to connect with nearby channels for fish to enter. During the dry season, the lagoons quickly dry up at a rate of three feet per month. The best time to visit this natural wonder is between July and September.( Credit-misadventuresmag.com) 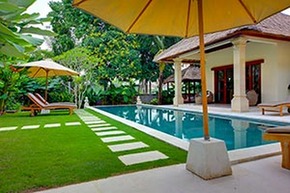 A Perfect Family Holiday In A Bali Villa For...

When was the last time you took a holiday? Due to the present economic downturn, many individuals or families do not have the opportunity to go on a... 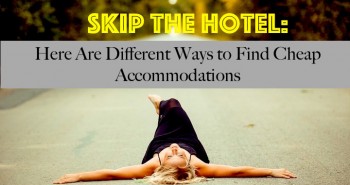 Skip the Hotel: Here Are Different Ways to...

Traveling isn’t cheap, but it certainly isn’t just for those with deep pockets. Airfare overseas can be a bit pricey, let alone the... 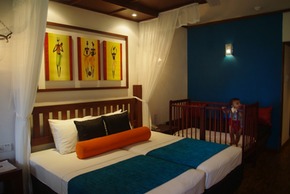 by Stephen Mattson, Staying in a hotel room can be a scary experience for those worried about personal safety and protection. To help increase the...