Students Dine in Splendor at Buca Lapi in Florence 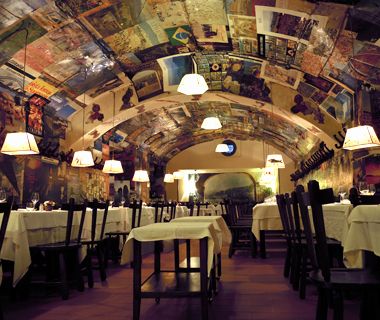 Story: On my first ‘grand tour’ of Europe, many years ago, two of my school friends and I were in Florence. We decided to have dinner at a small eatery down a steep stone staircase. We had passed it many times on our way from our pension to various museums and churches. Because it was in a cellar, we thought it would be inexpensive. We were definitely on a budget.

As Canadians dine rather early, we arrived at around six o’ clock for dinner. Not a  soul was to be seen. We were , however, shown very politely to a nice table, a table with a lamp and lampshade hanging over it. We sat down in the cellar restaurant, not knowing it was in the cellars of the Palazzo Antinori, the Antinori of world-wide wine fame.

The waiter brought us menus, but even before he did so, I had noticed that the lampshade over our table was scrawled upon and the scrawls looked like signatures. Yes, they were signatures  – of such famous people as Elizabeth Taylor, Rock
Hudson and Frank Sinatra.

I had a sinking feeling in the pit of my stomach. Even before looking at the menu, I knew that this was a very expensive restaurant. In fact, Buca Lapi is the oldest restaurant in Florence, dating from 1880. After pointing out this fact to my friends, we had a heart to heart talk and decided it was simply too embarrassing to walk out, especially as bread and rolls had been put upon our table. We decided to order the cheapest thing on the menu. But we were still worried about the cover charge and the tipping procedure.

By then a few other guests had arrived. The restaurant was starting to come alive, rather like a scene from a Fellini film.

We ordered an omelet each, glasses of table water and splurged on a carafon of the least expensive red Tuscan wine. Savoring every mouthful, we managed to eke out our dinner until the place had filled up. A band had started to play. I definitely did not want to leave. After all, not every student can dine at Buca Lapi.

nBy seven p.m., we had finished eating. A trolley of sweets was wheeled in. Always a curious person, I asked to have a look at the desserts. They were so exquisitely beautiful I decided I must try one. But I couldn’t decide which one.

I asked the waiter if I could have  little taste of each dessert. To my overwhelming delight, he granted my request. What I really wanted was to stay and enjoy the atmosphere.

Thinking that if I had a cigarette, smoking one might prolong our evening out. I did not really smoke, but knew there was a package of Italian cigarette in the bottom of my purse. It was rather scrunched and battered but I look out one cigarette. I couldn’t find any matches, so looked up rather desperately.  A well-dressed gentlemen came rushing over to our table and offered to light my cigarette.

After thanking him, he asked where we were from. it turned out we were all from Montreal, my hometown. He was a well-known jeweller and invited us to visit his brother’s watch factory in Switzerland.

Then he confessed that he had been watching the three of us all evening. Apparently, we had kept him amused for hours. When we got up to leave, our waiter told us that our bill has been paid.

Europe abounds in hotels dating from the 19th century. In fact, there are 68 “Grand” hotels if you count the dilapidated Europa, which...