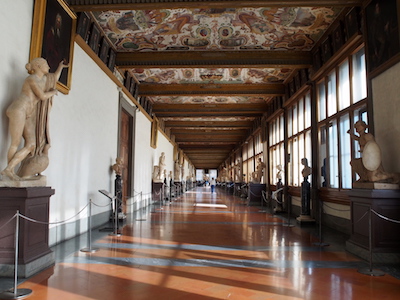 Some years ago, my former husband and I were in Florence just before Christmas.

The city was beautifully decorated with strings of little lights, red bows and evergreen wreaths and people were skating on a rink in front of the leather school. Everything was misty and superbly beautiful. The famous bridge over the Arno was garlanded with Christmas greenery and people were in a festive mood.

We decided to visit the Uffizi Gallery, one of the world’s top places to see paintings by the old masters. It was my husband’s first and probably his last visit to Florence, although I had visited the city many times.

We were staying in a small pension, the Due Mori, but only for a few days. This was our last chance view what the world goes to Florence to see.

We had no tickets for the Uffizi Gallery. They had to be reserved weeks in advance but we decided to try our luck anyway. On arrival, we saw a very long queue. I asked several people if they had tickets. The answer was a decided yes. We were told no more tickets were available. Even those with tickets had to wait an hour or two just to get through the door.

Not one to give up easily, and very frustrated, I looked around and spotted a small group of very well-dressed people getting out of limousines at a different entry. I got out my press card, grabbed my husband’s arm and suggested he hold up his camera so people would see it. He had been a TV cameraman in Prague and was used to taking pictures, so it wasn’t too much of a stretch.

Thank goodness we never wore “touristy” clothes, such as jeans and sneakers but always dressed in city clothes if we were going to be in a city, preferring to blend in with the crowd. That was a decided plus as we got to the other entry. We simply walked through the block of guards checking IDs. Not sure what was happening, we knew it was a celebration of some sort because tables were set with wine and canapes and a speech was obviously about to be given.

Not wanting to waste time at the Uffizi sipping wine and nibbling, we stayed just long enough to find out that the celebration was for the re-opening of that part of the Uffizi, a part that had suffered damage as a result of a bomb blast in a terrorist scare.

We walked through groups of people eating canapes and partying until I saw an elevator. We hopped on with some service people and luckily for us, I seemed to know which button to push and where to go when we got off the elevator. Naturally, we did not want to ask anyone.

We headed right for the Michaelangelo paintings and other Renaissance and pre-Renaissance works by such world-famous painters as Leonardo da Vinci, Botticelli, Raffael, Titian and Bellini.

After a couple of hours of viewing the best of the best, we decided our time in Florence had been very well spent.

Students Dine in Splendor at Buca Lapi in...

Story: On my first ‘grand tour’ of Europe, many years ago, two of my school friends and I were in Florence. We decided to have...