This is not a fair article, because we really didn’t “see” Ensenada. We sort of breezed through for a few hours on the main shopping strip with hundreds of others from our cruise ship. However, I’m positive that there is much more to the city and the people than what we had encountered. All I can share with you is our experience we had with the locals along the way. 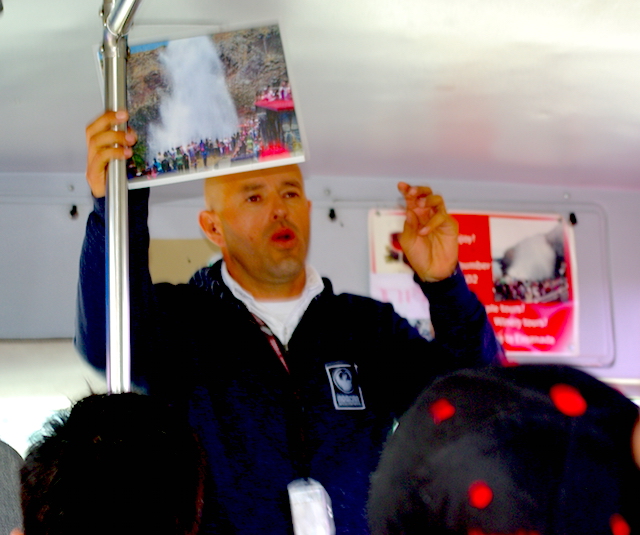 Our trip started on a small bus that was transporting us from the pier to the city. The ride took about 15 minutes, and in that time our guide entertained this bus of shoppers with a few helpful tips. “Do not exchange your money. We take American cash, and we give you back American cash.”

One passenger at the back raised his hand. “Is the American money here counterfeit?”

“Because I only have hundreds on me, and I want to make sure I’m getting real American money back!”

The guide sighed before continuing. “Why would you bring only hundreds to a poor country?”

Of course the passenger didn’t have any answer, and it was pretty quiet for the rest of the short jaunt. Some moments later, the guide looked through the windshield and then spoke again. “Alright, we’re here. This is also the point where you’ll catch the bus to return to the ship. It’s easy to remember— just look for the McDonald’s and Starbucks.”

This is Mexico, right? 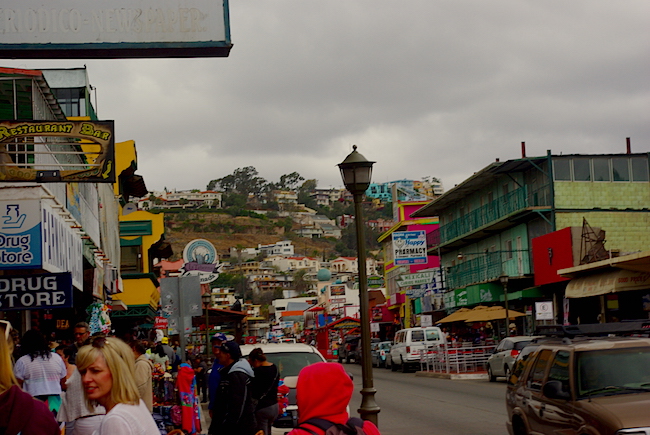 The moment we stepped off the bus, a group of kids holding various items for sale encircled us. Their parents were standing close behind, cheering their little ones on, as if it were a group sport. My wife already had experience with this sales technique, whereas I was a complete novice. We put our two children in their strollers and attempted to get going, which wasn’t an easy task. One boy shoved something in my face, but I couldn’t make out what it was. “Mister, one dollar, one dollar.”

“No, thank you.” I tried to escape, but the kids were blocking my way. I glanced to the right and saw a girl begging my wife for a dollar, but her ‘no’ carried more punch than mine. She pushed the stroller forward and parted the sea of kids. I followed her lead, which is usually the smart thing to do.

Once the four of us arrived in the main shopping area, we came upon a completely new set of people, beckoning us to go into their shops. A young pharmacist caught my eye, and she didn’t hesitate to speak with me. “Come in, we have great prices on Viagra.”

“Every man needs Viagra.” Her voice carried a sultry tone, and I was sure it had persuaded many a man to pop in and buy the little, blue pill.

I puffed out my chest and demonstrated how proud I was of my two happy and healthy children. “Trust me, I don’t need Viagra.”

She winked and smiled. “Okay. We also have some great pain pills.”

This was becoming a little too Fifty Shades of Ensenada for me, and I picked up the pace to catch up with my wife, who was nearly peeing in her pants from laughing at me. 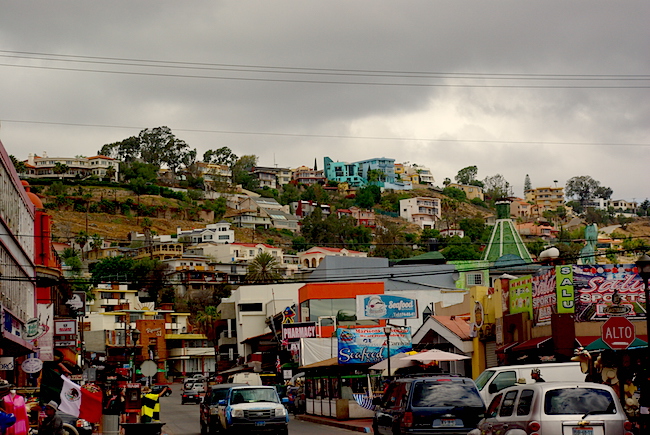 Further down the main strip

We continued onward, the street brimmed with tourists and those wishing to sell something to them. Coupled with tightly packed stores one after the other, it was more like retail hell than a shopping adventure. To be fair, though, I hate shopping in the best of conditions. My wife, on the other hand, finds it more like a game of social niceties.

A barrage of calls rang out to us for blocks on end. Store owners offered us “free parking” for our two strollers; everything and anything was “almost free” for us and, of course, there was a bounty of Viagra. Then, my wife heard those magical words she couldn’t ignore: “Would you like some free samples of tequila?” 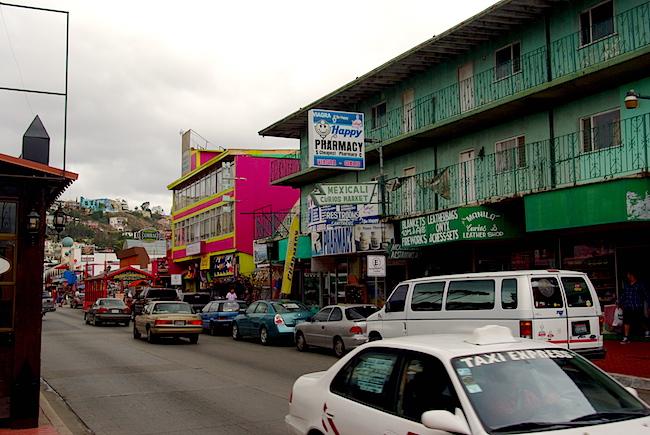 We were stopped by vendors here

She didn’t have to think twice and dragged me inside the liquor store. We placed the strollers in front of shelves lined with bottles of tequila from the floor to the ceiling; even the kids appeared mesmerized by all of them. The store owner handed us little sample cups, and then poured in some of the house specialty, all the while giving us the fine details of what we were drinking. I took a sip, it’s pungent smell cleared my nose. “I really like that it’s smooth—nothing like I thought it would be.” My wife nodded and agreed. 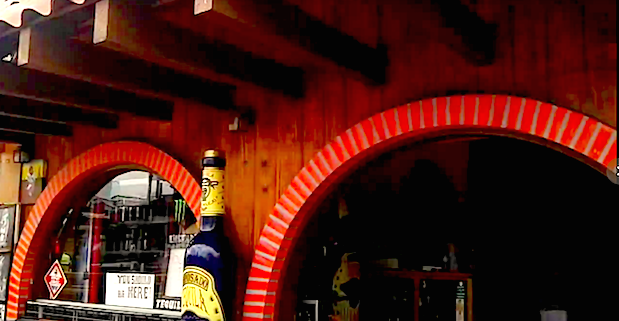 The owner reached for a different bottle and began pouring us more. “Now, I’m going to let you try a tequila that’s very popular with Americans.”

I drank it and winced from its syrupy flavor of sugar and fruit. “Um, this is really too sweet for me.” I would have left the store at that point and waited for my wife, but the tenacious, little kids, who surrounded me when we got off the bus,  had followed us and were standing patiently outside.

My wife, on the other hand, loved the sweet tequila. Before I knew it, she was over 10 samples down. It was the prefect moment for the owner to start talking business. “Let me make you an offer. I’ll give you these two bottle for $65.”

My wife was quick to start bargaining. “How about $50?”

“Deal!” She opened her purse to retrieve her wallet and then paused. “Um, honey that’s still $65, right?”

I just smiled at my little wheeler and dealer, surprised by how sharp she was at calculating after 12 shots of tequila. After she paid, the owner handed me the two large bottles of tequila in a plastic bag, which ended up dangling dangerously in a thin plastic bag from the handle of my daughter’s stroller.

We continued down the street, with only a couple of kids in toe, and peeked into those tourists shops you love to hate. Each one overflowed with colorful knickknacks that tempted you to bring back a bit of Mexico to place on a mantel or shelf, or later in a box marked ‘Misc.’ It was close to lunch time, and we could smell the aroma of food drifting in the air. One waiter came out of his restaurant and suggested we step inside. “We have a special today: two margaritas for just $7.00.”

My wife looked at me, her eyes slightly twirly after already having indulged in the local hootch. “Do you want to go in?”

How could I resist? We entered the restaurant, which the owners had completely decked out in American armed forces memorabilia and camoulflage. Apart from the three waiters, we were the only people there. The cook suddenly made a cameo appearance from a room off to the side of the bar and returned to kitchen, wiping his hands on his apron. I’m sure it was white when he bought it. We took a seat at a table, and I began reading our menu options: “Chicken wings – American style – French fries, cole slaw, cheese burger and fried jalapeño poppers. We’re in Mexico, right?”

We placed our order of two margaritas and a big basket of fries, which was just the sustenance we needed. However, it didn’t take long for the effects of the tequila to kick in and mellow my mood. My wife and I were chatting away, both of us completely tipsy, when a flash of a little, naked boy caught the corner of my eye. I leaned closer to my wife and chuckled. “Only in Mexico, right?”

She just grinned at me, but there was something about her look that clued me in to think twice about what I had just seen. I turned towards the giggling and realized that the little, naked boy was ours! I jumped from my chair and watched him weave between tables, with Button clapping in amusement. Luckily, she was more modest and had kept her clothing on. “Boots, what are you doing?”

“Dancing, Daddy.” He gave me a smile that melts my heart every time, making it impossible for me to be mad at him. I gathered his clothes, which he had scattered around the restaurant, and then swooped him up under my arm. My wife handed me his diaper bag, and I followed one waiter’s indication to the bathroom door off to the side of the bar.

Once I got Boots cleaned up and dressed, I looked to the left, to the right and then behind me. There was only one toilet, which was missing the seat, but there was no sink. I used one of the baby wipes on my hands, and then it dawned on me that the cook came from here just as we arrived. My head was spinning with images of him preparing our food with dirty hands, along with visions of dysentery affecting our bodies. My stomach lurched, and I hurried out of the bathroom with my son.

I paid the bill and ushered my family out of the restaurant, deciding it was best to keep my wife in the dark about this tidbit of information.

The kid and their new toys

By that time, I was ready to call it a day, and I suggested we return to the point where the bus was to take us back to the pier. We walked six long blocks with more shops and kids, each wanting to make a deal. One shopkeeper, waving a doll in his hand, caught my wife’s attention. “How about one for your baby girl?”

He handed it like a present to my wife, who looked over the handicraft in traditional clothing. “How much?”

The shopkeeper didn’t hesitate to counter the offer. “$10.”

He was silent for a moment and then gave in. My wife impressed me with her bargaining technique, and now I was eager to try. “How much for the toy guitar?”

Yet, the shop owner wasn’t quite finished with business and showed us a small box with toys for babies and toddlers. I pointed to the rattles, curious to know the price. “How much are these?”

I took two of them and put two dollars in the box.

He raised his arm and showed me the palm of his hand. “No, it’s two for five.”

“Are you kidding me? No way.” I put the rattles back, retrieved my $2 and walked away, ignoring his attempts to sell them to me now for 50 cents. I hate it when someone tries to rip me off.

When we arrived back at the bus, I had become a pro at saying “no” to the following:

And as for “almost free?” We all know that nothing’s for free.

It was an adventurous lesson for us in Ensenada for sure, if only for a few hours, and we experienced similar scenarios we had only heard about from others. However, next time I’ll skip the shopping extravaganza and go horseback riding instead. 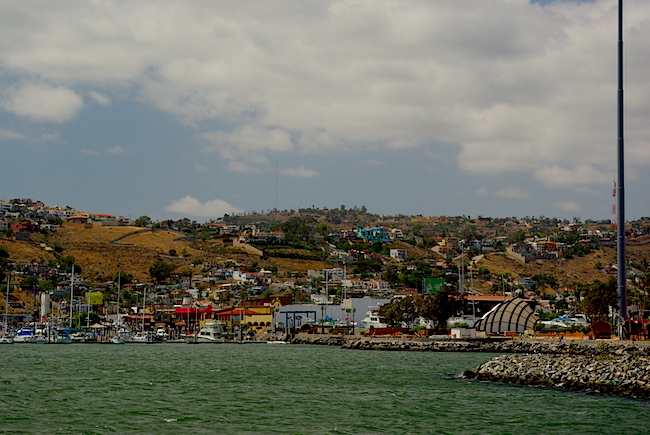 View on the way back to the ship 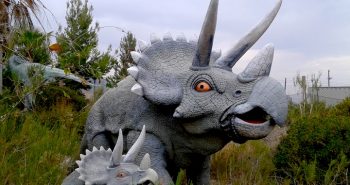 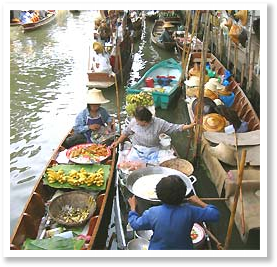