The Paul Boyer Museum of Animated Carvings features the imaginative concoctions of Paul Boyer. Born in 1930, Paul is a self-taught artist who has been carving for more than 60 years. The museum showcases 30 years of his work, with over 65 displays consisting of a working calliope (steam whistle keyboard) made from cedar, animated hand-carved figurines, including people, animal, replicas of planes, cars, engines, farm machinery, and wonderful wire sculptures that have ball bearings riding on a maze of tracks and bouncing on drums. Paul uses soft pine, cedar, and walnut for most of his carvings, and he hand paints them all. His work ranges from humorous and playful to mesmerizing. The museum is managed by his daughters, Ann and Candy, who will gladly provide a tour or let you discover Paul’s work independently. Address: 1205 Main Street, Belleville, KS. For opening hours call:  785-527-5884 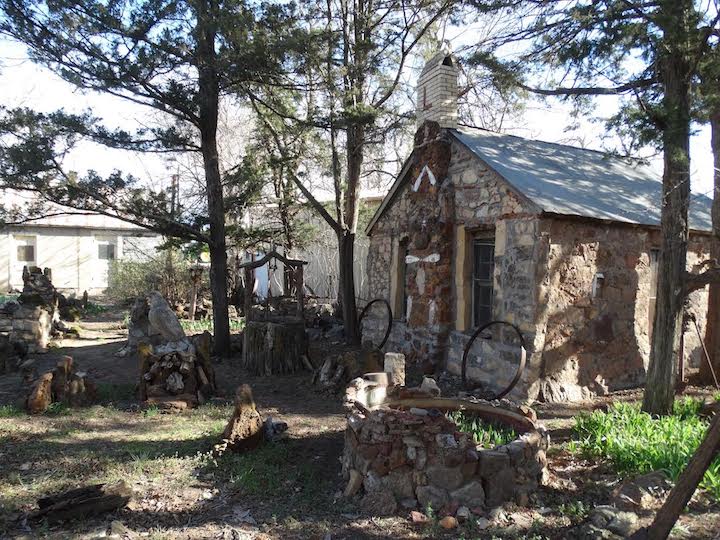 Jim Dickerman is a grassroots sculptor and welder near Lincoln, who has decorated local roadways with his large and small scale monuments. His artworks have been fabricated from found objects: rusted farm equipment, car parts, railroad scrap metal pieces, animal bones and feathers, driftwood, limestone, and antlers. Statuettes start on Highway 18 in Lucas, Kansas, and moving towards the east, then on Highway 14 starting in Lincoln and heading towards the south to I-70. Address: 213 S Main St, Lucas, KS. Contact the Kansas Grassroots Center: (785) 525-6118. Note that Dickerman’s creations are located on private property, so kindly be respectful when taking photographs.

Approximately 28 pieces of Pete Felten’s limestone art may be found throughout Ellis County. Dozens of Felten’s works dot the landscape in Hays, the largest city in northwest Kansas, population 20,000. An example of creativeness includes the “Pteranodon,” which greets travelers on the northeast edge of the city. He works on limestone sculptures in the old Felten Truck Line garage or on the lawn in front of the Stone Gallery. Most mornings, Felten, born in 1933, can be found sitting at the tailgate of his red 1965 International pickup truck, with some kind of gizmo in hand. Talkative, sly, he’s an octogenarian of brains and stamina. Address: Pete Felten’s Stone Gallery Studio, 113 W Sixth Street, Hays, KS. Phone: 785-625-7619. 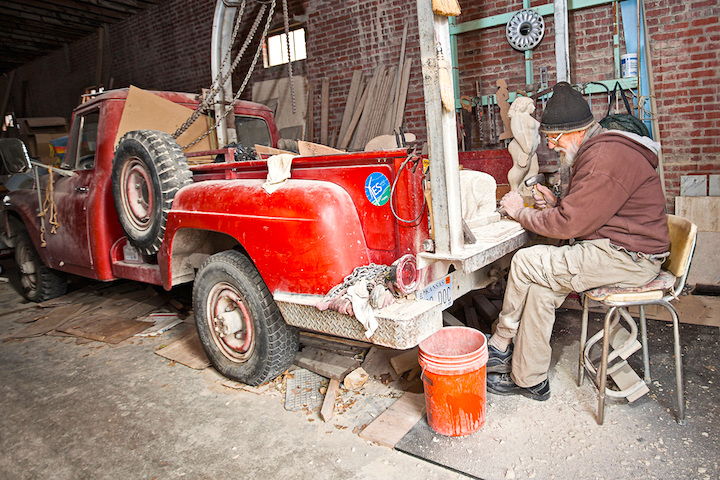 The Ed Galloway Totem Pole Park is a Route 66 icon and home of “The World’s Largest Concrete Totem Pole.” Located on the border of Kansas and Oklahoma, it’s one of the top roadside landmarks in the area and has been featured in several books on environmental folk art and Route 66 lore. In 1999, the park was added to the National Register of Historic Places. Ed Galloway spent his retirement years building a unique park, a monument to the American Indian from stone, concrete and his imagination. The center piece is a giant Totem Pole structure supported by an enormous concrete turtle. Nearby is a “Fiddle House,” which houses a display of Galloway’s hand-crafted fiddles and other inlaid wood artifacts. Roadside tables supported by small concrete totems invite travelers to picnic in the shadow of the large totem pole. The Totem Pole Concrete Park was restored from 1988 to 1996 by the Kansas Grassroots Artists Association, which no longer exists.

Starting in 1905, Samuel Perry Dinsmoor (1843-1932) built his house in log-cabin style using hewn limestone. Around it, he constructed his Garden of Eden between 1908 and 1929. It features 30 concrete trees connected by sinuous branches and holding over 150 cement figures reflecting his religious and political beliefs. Dinsmoor, who married a 21-year-old at the age of 89, lies buried in a glass-topped coffin in a mausoleum in the Garden. He created his sculptural environment in a residential area, within walking distance of Main Street businesses and visible from the principal railroad track. It appears that Dinsmoor selected the location with the public in mind. The environment was a popular attraction; income from visitors’ admission fees provided a degree of financial security for Dinsmoor and his family. He welcomed visitors and led tours of the site while the work was in progress. Address: 213 S Main St, Lucas, KS. Contact the Kansas Grassroots Center: (785) 525-6118. 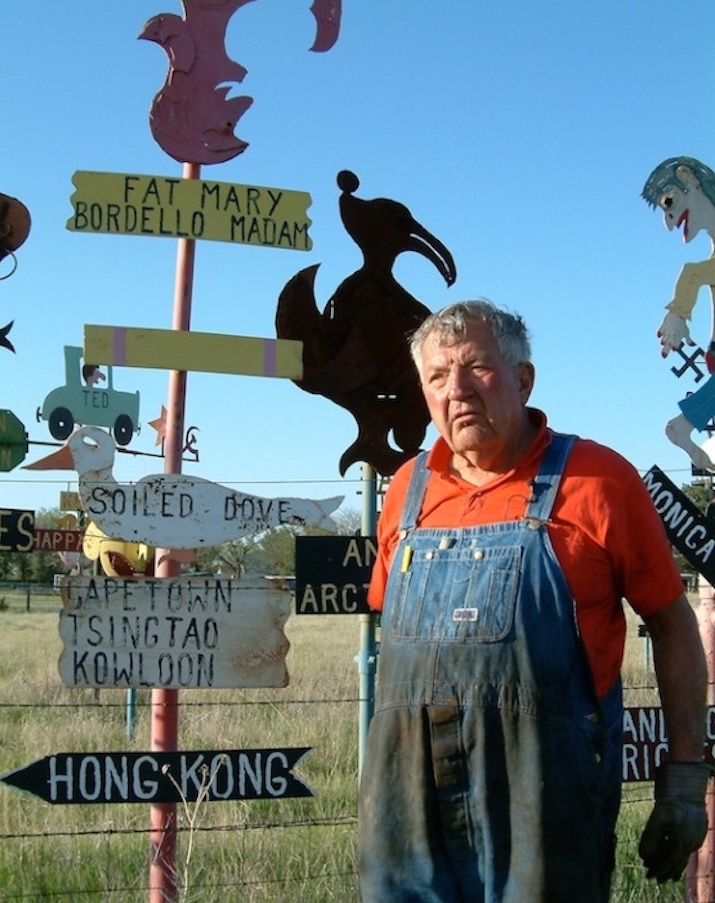 Born in 1930, Myron Thomas Liggett lives in Mullinville, where he exhibits hundreds of his metal art sculptures. His works are often made of painted, welded metal and often contain re-used farm implements, such as combine discs. After a career in the Air Force, M.T. returned to the farm where he was born and turned his anti-government sentiment into social and political theater. Directions: Take I-235 to Wichita; take exit 7B, then 115 miles west on US 400 to Mullinville; there, US 400 merges with Hwy 154 and turns into South Ave; the sculptures are on the north side of the road, on the west edge of town.

Frank Lockert settled in Coats, Kansas, in the early 1900s and began building a petrified garden beside his Main Street home. He intended to build a museum to show off his collections with a rock garden, but died before he could develop the museum. The current property owner, Patsy Fittro, discovered the rock garden underneath weeds and brush. Lockert’s petrified wood garden may be viewed from the road.

Woody Logback’s “automata” boxes feature mechanized scenes that come to life after a nickel is inserted through a slot. A retired die technician, Woody specializes in building the oak cases where hand-carved figures act out mini-dramas. Logback spent up to two years creating each of his “automatons,” carving the miniature wood figures and determining how to maneuver the chain and metal drive mechanisms to make the figures move for the desired effect. Some of Logback’s boxes include farm scenes, complete with a fox chasing chickens, a cow being milked, a dog jumping through a hoop, and a drinking man pouring out his bottle after the devil jumps out to put the fear of God in him.

While his art pieces have the appearance of wood, Jesse Montes’ works are made entirely out of cardboard. The self-taught artist, who died in 2013, grew up in northern Mexico, and he began using cardboard as a way of recycling and releasing stress. He created three different textures by the way he cut the quarter-inch strips of cardboard or bulletin board paper. The different textures were glued onto a frame—also made of cardboard—using an art supply staple of elementary children: Elmer’s glue. The color of the pieces comes from acrylic paint or from the bulletin board cardboard that Montes can purchase in 20 different colors. Many pieces are made from Pizza Hut box tops, which high school students would save for Montes when he was a school custodian in Dodge City. Montes cut every piece by hand, and the finished three-dimensional art pieces include landscapes, portraits and free-standing works that stand up to 6 feet tall. Forty-two pieces of Montes’ two and three dimensional art may be viewed in the home gallery of Garden City resident Duane West. Admission is free and may be viewed by appointment only. Phone: 620-276-6754. 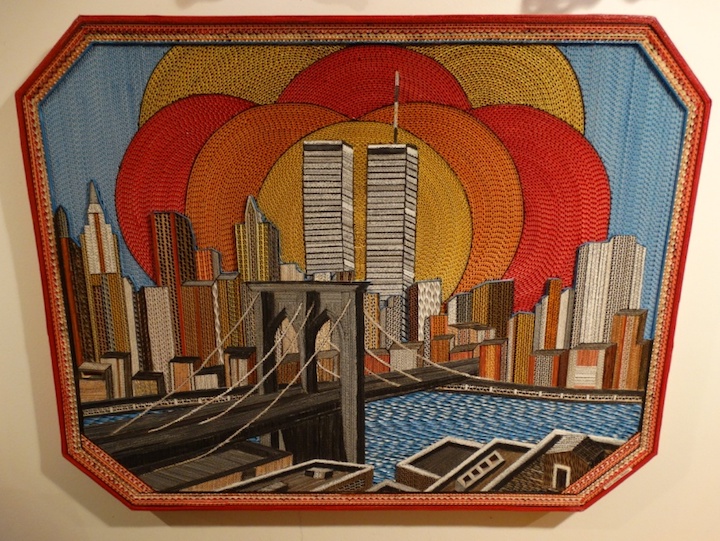 From the late 1950s to 1999, Florence Deeble created backyard postcard scenes such as Mount Rushmore and Estes Park. Made made from colored cement and rocks, her works reflect some of her favorite vacation spots. In 2002, Mri-Pilar began radically changing the interior of the Deeble House into the Garden of Isis. This interior installation consists of foil lined walls and ceilings. Pilar has created and displayed hundreds of recycled assemblage sculptures called “Rebarbs” and “Unclocks” throughout seven rooms of the house. The Garden of Isis, located at 126 Fairview, Lucas, KS,  is art made from doll bodies, mannequin parts, toys, canisters, kitchen utensils, and other recycled materials. Many of the items are available for purchase. Contact the Kansas Grassroots Center: (785) 525-6118, located at 213 S Main St, Lucas, KS. 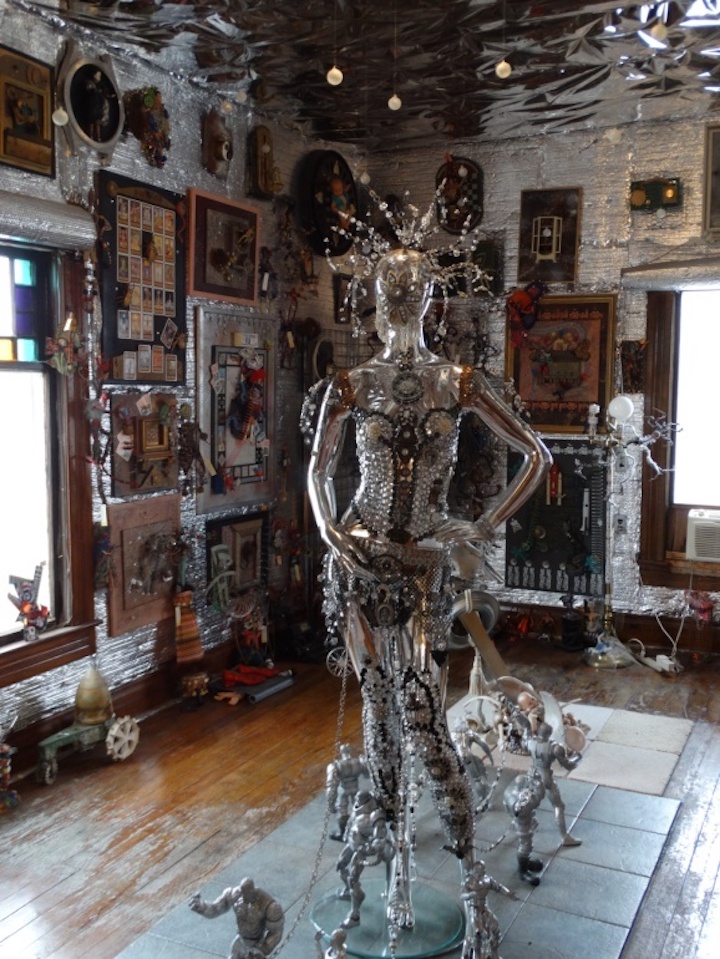 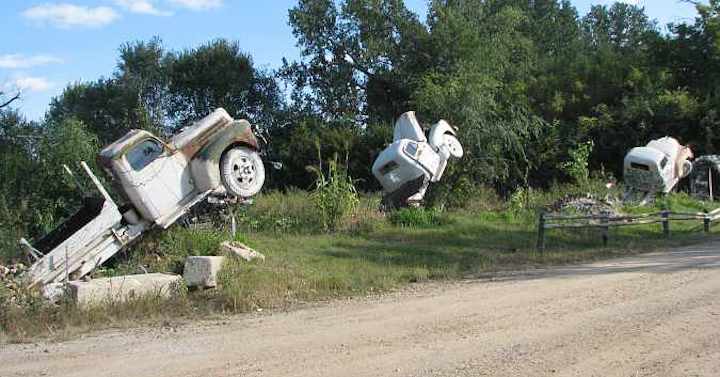 When the Shawnee County officials demanded that Ron Lessman dispose of a few disused vehicle carcasses strewn across his farm, he did whatever any law-abiding, individualistically-inclined person would most likely do: he buried them. The six antique trucks were once used as hog shelters on the Lessman’s farm. Lessman said the whole imbroglio began in 2000 when he managed to upset “a local millionaire who I underbid for a local sand and gravel project he wanted to do,” he said. County inspectors told him to get rid of all the rubbish from the property, claiming that, due to its close proximity to a flood plain, it was “all going to float down the river and kill everybody in Lawrence,” according to Ron. More specifically, the judge ordered him to pick the trucks up; so Ron hoisted the bodies up with his front-end loader, hollowed out holes, and buried the ends of those trucks in the same earth his grandfather once grew tomatoes, watermelon, and cantaloupe. For added emphasis, he secured them in massive quantities of home-made concrete. In the summer of 2006, Lessman added “Boathenge” and then he concocted “Beer Bottle City,” cement collages that are exercises in the re-collection of the odds and ends of life, things that in isolation might be consigned to oblivion (antique whiskey bottles and a conveyor belt from the sand plant), but here constitute the raw materials of art. Address: Truckhenge, 4124 NE Brier Rd, Topeka, KS, is open to the public most days. Reservations are recommended. Phone: 785-234-3486 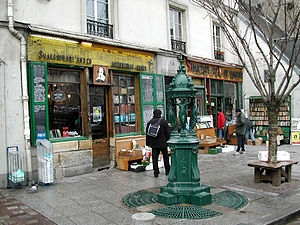 by Tracey Marie Walker, An Independent Parisian Bookshop That Still Thrives Shakespeare and Company bookshop is a literary center in Paris. It... 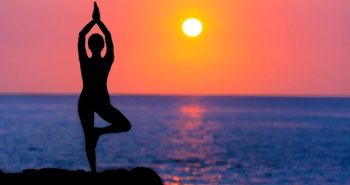 Take A Stroll Above and Around Salzburg

Gain A New Perspective of the Enchanting Austrian City When the weather cooperates, there are several spots in and around Salzburg providing...

Leave a Reply to Agness of Fit Travelling Cancel reply