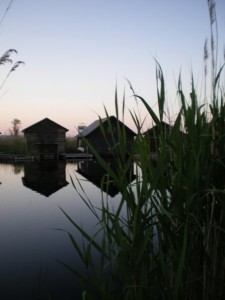 The east Austrian village of Rust, just under two hours south of Vienna, is a don’t-miss spot on the western shore of Burgenland’s Lake Neusiedl.

Most visitors to the southeast Austrian state of Burgenland will describe the area as different from everywhere else in the country. The terrain, relatively flat but for the occasional hill, is covered with vineyards and dotted with low trees, with the occasional village or small town popping up along the road. The area’s prime tourist destination, the Neusiedler See, is a shallow lake that sits on the border between Austria and Hungary. The village of Rust is just north of the Hungarian border, on the western side of the lake.

Remember to Look Up

Reachable by bus or by car, the lakeside town of Rust will win visitors over instantly with its charm. Colorful buildings and cobblestone streets make up the town center, and perched atop nearly every chimney is a stork’s nest. It is not uncommon to hear the loud flap of storks’ wings overhead, or hear the low clicking sound they make from their perches above.

Then Be Sure to Drink Up

As Burgenland is Austria’s star producer of wine, it is no surprise that wineries dominate Rust’s town center. Guests can sit down to taste a fine selection of wine, most often supplemented with cheese, meat, and bread. Some wineries offer a full warm dinner, but it is more likely that a cold buffet will accompany the wine.

In addition to the fine gastronomical selection and the picturesque town center, Rust’s prime location on the lake enables visitors to bike a short distance to the village of Mörbisch, where a ferry is available to Illmitz, on the eastern shore. From there tourists can reach other small towns, such as St. Andrä on the lovely Zicksee, or Podersdorf, which boasts a beach and has a ferry directly back to the harbor in Rust. This town of wineries and storks’ nests is, therefore, the ideal place to stay on the lake.

Paths surrounded by water, tall grass, and charming little wooden holiday cabins wind along Rust’s shoreline, making the lake itself an attraction. Hiring a boat is also an option, and it is possible to paddle or row around the area. Views of the town from the water are particularly beautiful at sunset.

Though the wine, the storks, and the lake serve as the tangible charms of this little town, the magic really comes from the sense of calm Rust can cast over its guests. It is the perfect place for a slow-paced summer holiday, where no deadlines, no rushing, no sense of the everyday chaos seem to exist. The town has managed, somehow, to stop time and put visitors at ease, making it ideal for de-stressing and relaxing. If traveling anywhere near eastern Austria, Rust and the Neusiedler See are worth a visit.