We set sail from Piraeus, Greece with seas a deep navy-blue and fluffy white clouds floating lazily above Mount Olympus – the city of Athens a mere granite backdrop to the impending enchantments just over the horizon. 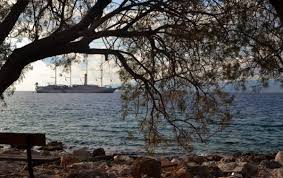 I was aboard the Wind Star – long, sleek, with dazzling white sails soaring 200 feet above my head.  Standing on deck and gazing down at the animated crowd bidding us Bon Voyage, it was clear: this stunning vessel commands recognition and respect wherever she sails.  Now I was a part of this reality – or is it a fantasy? Whichever.  I knew this would be the cruise of a lifetime.

Windstar Cruises operates a fleet of small luxury cruise ships known for their intimate yacht-style experience and unique voyages to the world’s best small ports and hidden harbors, cruising to 50 nations and 100 ports throughout Europe, the South Pacific, the Caribbean and Central America.  Recently Windstar purchased three new ships, the Seabourn Pride, Seabourn Legend and Seabourn Spirit.  This effectively doubles the size of Windstar’s line and makes it the leader in small-ship cruising. And, perhaps one of the most appealing things about the cruise line: they take only 148 to 312 passengers. Expect fine service and attention to your every need.

Wine for the Bard 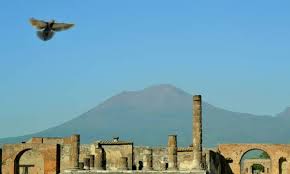 Our first port-of-call was Monemvasia, Greece, a town inhabited since the 6th century and located on a small peninsula off the east coast of the Peloponnese.  After a very long and steep climb, we reached a large plateau hovering above the sea, the site of a medieval fortress and a stunning Byzantine church, the Church of Christ in Chains, with its intricate, carvings of peacocks, a favored symbol of this era. Nearby, another church, the Agia Sofia, had ceilings and walls studded with sparkling mosaics. During Monemvasia’s Golden Age in the 1400s, wealthy families exported wine, a variety of Madeira, which was actually praised by Shakespeare. Learning that this ancient wine is still served in local trattorias, how could I possibly miss this chance? I found a medieval-looking café sitting prettily under a stand of orange trees and this renowned pink nectar accompanied my dish of freshly-caught (think 2 hours ago) grilled scallops. Rapture. Back on board, I was delighted to hear the same music thrumming over the decks that we’d heard upon first embarking: the sound track from the movie “1492”.  It is grand, majestic, and absolutely perfect for setting sail to a new adventure.   (The Wind Star played this same exciting riff each time we left port- our clarion call to anticipate the next exciting destination).

Next: Glythion, Greece. The town is surrounded by the formidable Taygetos mountain range and adding a bit of romance, Glythion is reputed to have been founded by Heracles and Apollo; their images still appear on its coins.  It was recommended that we visit the Diros Caves, first opened in 1963.  It’s about 19 miles from the town, and considered one of the most spectacular sites in Greece. We viewed the glorious, mile-long interior named the “caverns measureless to man” by boat and saw forms shaped like well-known icons:  There, just ahead in all its tilted glory, isn’t that the Leaning Tower of Pisa? Further on, that mammoth pile has to be the great Chinese Palace. Stalagmites all. 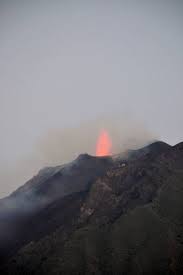 What can one say about Taormina, Italy that hasn’t already been said? Truman Capote wrote about it in much of his work and D.H. Lawrence lived in this town’s oldest house, Villa Fontana Vecchia. Its beauty is legend, with the Ionian Sea providing a cinema-worthy backdrop, its ancient theatre the most celebrated ruin in Sicily, and Mount Etna towering over all. I had a happy time navigating Taormina’s narrow, cobblestone streets which are closed to traffic. I window-shopped and shopped till I finally found the most irresistible store of all – rainbow-colored pasticcerias (almond marzipan sweets) displayed in all their tempting glory – a delicious treat to take back to the ship.

On our days “at sea”, there was plenty to keep us busy on board.  My fave activity was merely claiming a lounge chair on deck and allowing myself to be seduced by the sea, the beautiful sea. Having in hand one of Wind Star’s inspired cocktails is a major plus. But if you require more activity, there’s the fitness center, with its challenging Body Sculpting Boot Camp, the spa beckoning with sumptuous facials and wraps and best of all, a Water Sports Platform where one can slip into the warm, enticing sea to windsurf, water ski or lie back on a water mat and ponder why you are – at this very moment – the most lucky person.

Lipari, Italy is the largest island between Vesuvius and Etna in the Aeolian Islands. It was enlightening to visit their Museo Archeologico Eoliano, one of the very best, which traces the volcanic and human history of these islands.  It houses finds from Lipari’s necropolis and the most sensational collection of miniature Greek theatrical masks in the world. Leaving this lovely town in dazzling sunlight, we set off for the place where its famous sunlight is extolled in the moving lyrics of Torna A Surriento, “Come Back to Sorrento.”

The Scent of Orange Groves

That song of Sorrento that we’ve known and loved and the images it portrays are all there – the shining sea, the citrus-perfumed gardens, and love – love in the air. It’s there. Sited on a terrace overlooking the Amalfi Coastline which affords a stunning panorama of the Bay of Naples, Sorrento is imbued with echoes of is ancient past and its singular charm lies in its sun-drenched rustic simplicity. Meandering down a maze of medieval alleyways, I visited quaint artisan workshops and found a tiny, fragrant boutique where I bought luscious lemon soap – and zingy lemon candies!  “Return to Sorrento” ends by saying to one’s love “come back to Sorrento so my broken heart can mend.” Well, as I leave this irrepressible place my heart’s not broken exactly – a bit blue maybe – but now I’m off  to some true blue magic. That would be, of course, Grotta Azzurra, the Blue Grotto! 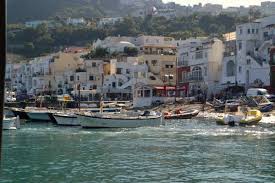 This bewitching phrase typically conjures up thoughts of Rome, but for me the concept is more closely aligned with a fabulous little kernel in the Bay of Naples known as Capri! Sleek black and silver tenders bobbed close to our ship, ready and waiting to ferry us to Capri. As we sped off, in the distance I saw candy-colored homes built right into steep cliffs forested with oleander, jasmine and bougainvillea and before us, the iconic Faraglioni Rocks, seeming to stand guard over this wonderful island. Shopping here is a heady delight. All the top designers are here: Gucci, Bottega Veneta, Prada, Valentino – lofty couture goods with equally lofty price tags.  Best, therefore, to confine one’s amusements to sitting at a well-positioned sidewalk café and people-watching.  Capri is made for this – enjoying a voyeuristic lunch while sighting a Loren or Mastrioanni look-alike; maybe even donning one’s own Jackie-O shades and hoping a wandering paparazzo will notice you!

We took a small rowboat to the Blue Grotto. A word to the wise: if you’re claustrophobic, perhaps you’ll want to rethink this adventure.  The entrance into the Blue Grotto Cave is so low that you must lie down on the floor of your tiny boat in order to enter, and then there’s the matter of floating into this dark cave.  Think you can manage it? Ok, once inside you’re met with a most spectacular sight as the sunlight is refracted onto the cave’s waters. It’s a luminous blue seen nowhere else in the world – and though I had only about a minute inside to relish its loveliness – cave-phobic me was glad I ventured in.

Still more blue? It’s inevitable.I’d come to the end of my idyll, this Windstar voyage, and perhaps glum and downhearted expressed my mood more accurately. I had wined and dined royally, I’d had raucous BBQ’s under the stars (and the sails) with new friends, I’d danced nightly to some of my favorite music, and I’d gazed up at ridiculously blue skies from a water mat, lounging a few feet away from our ship.

I got to know many unfamiliar parts of the world on more intimate terms as we sailed into harbors known only to other yachters – helping me delve deeper into local customs and cultures. Yes, the Wind Star is a small vessel but my memories of this voyage are large. In my mind, I know I will return often to those quiet moments when the engines were off, the sails were up, and the only thing I heard was the sound of the sea. 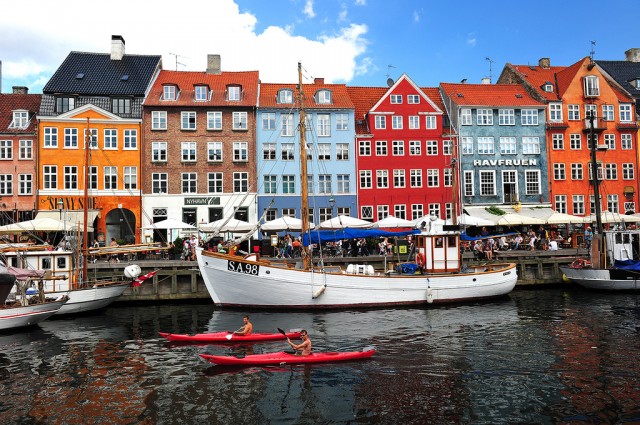 Luxurious Summer holidays by Cruising the...

If you’re looking for a different type of vacation, think about cruising the Baltic Sea in the summer. This vacation combines the ease of a... 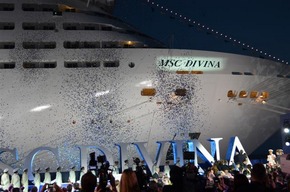 Travellers interested in cruises may remember the furious protests in Venice last month when the MSC Divina, labelled a “monster ship” in...