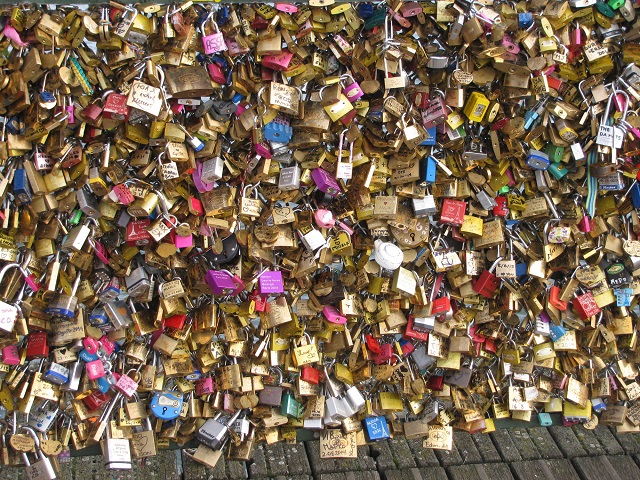 One small section of the bridge and all its locks

Paris is known as the City of Love, and the “Love Locks” on the Pont des Arts definitely reflects this. But is it possible to have too much love, or at least too many “love locks’?

There are at least an estimated 700,000 metal padlocks on the railings of the Pont des Arts, the pedestrian bridge that crosses the River Seine to the Louvre. The locks are painted with couples’ names and are symbols of their ever-lasting love. The railings are made of metal mesh, but there are so many locks that people can no longer see through the mesh. Most of the railings are now boarded up on the pedestrian side, which was the result of the weight of a 5-foot, padlock-filled section that came crashing down in June. Luckily, the heavy railing fell onto the bridge and not into the river, where it could have injured someone in a boat below. Another section was taken down before it, too, could have fallen: it weighed 1,100 pounds! 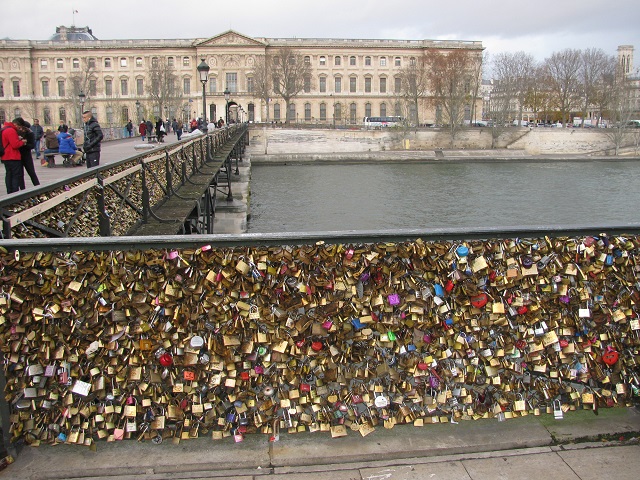 Now that the bridge is full of locks and boarded up, people have started using the side rails

Paris receives millions of tourists every year, and many of them love putting locks on the Pont des Arts, a practice that started about 7 years ago. 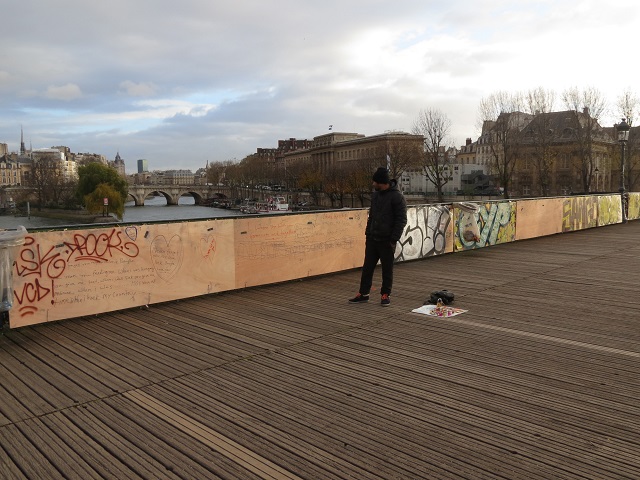 A hopeful lock vendor stands on the boarded-up bridge

No one is sure what started the “love lock” craze, but some link it to two Italian novels printed in 1992 and 2006 (I Want You by Federico Moccia). Others say it dates back to 19th-century Hungary or to World War One Serbia. The idea has spread to other parts of Paris, such as on railings near the Sacre Coeur, and in many cities in England, Russia, Italy, Ireland, Canada, Germany, Hungary, Slovenia and China, just to name a few.

The practice works like this: Attach a lock to a bridge railing, throw the key into the river, and make a wish. A fence, gate or other public fixture works just as well. It seems harmless enough, until sections of railings collapse from the weight of all that love! Some people also complain that the keys make the river dirty.

Whatever people think, it appears that the practice is here to stay.  While we were in Paris, we walked on the Pont des Arts, as were hundreds of others, and all were having great fun pointing out various locks with names and taking lots of pictures. Enterprising vendors were also on the bridge selling locks, and we saw a few couples buying them. So, I doubt the craze will tamely go away! 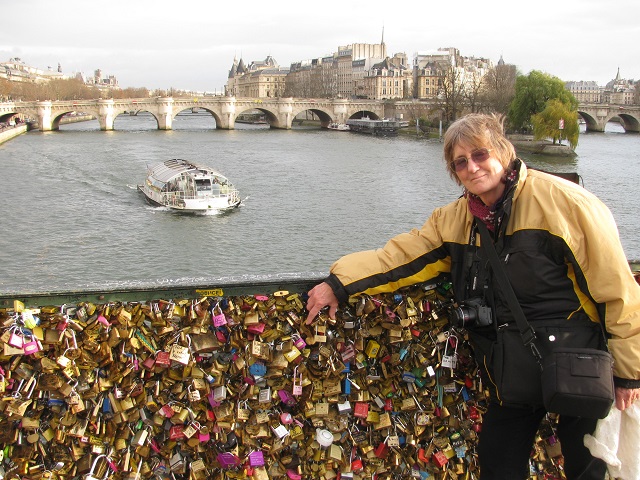 Viv M points out some of the locks, with a lovely view of the River Seine behind

Obviously, Paris mayor Anne Hidalgo would like to solve the problem of too many locks without changing the idea that Paris is the capital of love. One suggestion has been to use ribbons instead of locks, or to put the locks in a different place other than on a bridge. I wonder if that will catch on?

During the time we were visiting, it was also our wedding anniversary. We didn’t attach a lock, but it did seem somehow an appropriate place to stop and think about all our years together, in the midst of all that love!

A trip to Maryborough allows visitors to catch a glimpse of Australia’s past. Its abundant examples of colonial and Queenslander architecture...