Located in one of the holiest places in Christendom, Bethlehem has been the centerpiece of pilgrimages and Christmas stories throughout the ages. It has also uncomfortably found itself in the cross-hairs of conflict during its long history. Perhaps overshadowed by the grandeur of its neighbor, Jerusalem, and the presence it holds in the Holy Land, Bethlehem certainly deserves a visit nonetheless. Whether during the Advent celebrations or in the middle of summer, Bethlehem is a highlight when visiting the West Bank. 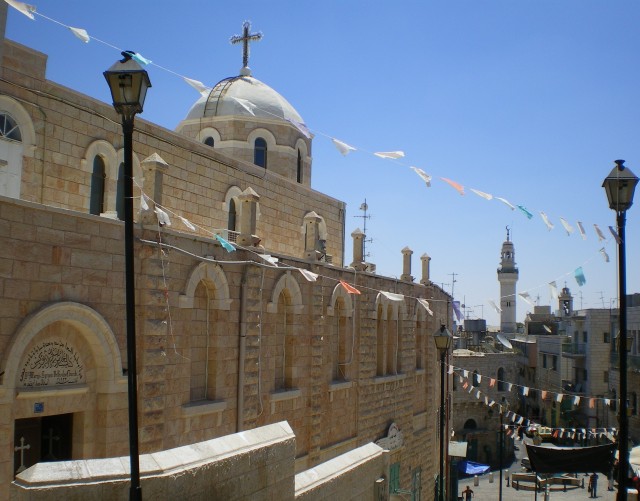 Away in a Manger

From Al-Cinema Square, it is an easy walk up Pope Paul VI Street to Manger Square. The narrow street leads visitors past the Lutheran Christmas Church, St. Mary’s Syrian Orthodox Church, then down a series of steps towards the minaret of the 19th century Mosque of Omar, whose crescent moon punctuates the skyline of crosses and stars in the old city. 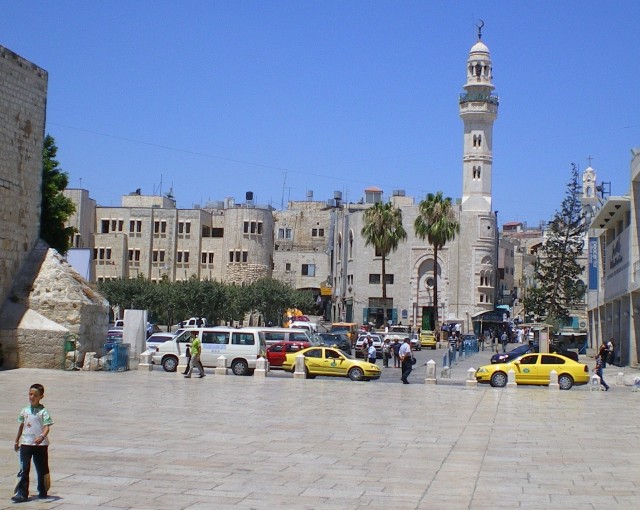 Synonymous with yuletide greeting cards, Manger Square is Bethlehem’s center stage and a bustling location with a flurry of tourists who flock in each day. There are a scattering of souvenir shops, restaurants and taxi drivers, who offer transportation at negotiable prices to various West Bank locations, such as Hebron and Ramallah.

Prior to entering the Church of the Nativity, it is further worthwhile to take a quick peek inside the square’s Peace Center. An exhibition of every size, color and interpretation of the iconic nativity scene are on display from around the world in gallery room two.

It’s best to mind one’s head before passing through the aptly named Door of Humility at the Church of the Nativity, where the Armenian, Greek Orthodox and Catholic clergy meticulously administer their every allotted square meter. Following the Crusaders’ idea to alter the door’s original size, so as to hinder any would-be attackers who had thought about charging in on horseback, the entrance to the Church’s non-descript  façade from the Ottoman era became even smaller. Look closely to see the faint lines of the first 6th century door and Crusader arch design.

Discovered in 1934, the exquisite 4th century mosaic flooring inside is remnant of the Church’s earliest construction in 326 AD, whereas the limestone columns date to the structure’s rebuilding in the 6th century. The highlight of the Church is, of course, the Grotto of the Nativity. Just off to the right of the ornate altar with its string of looming lanterns and chandeliers overhead (six belong to the Greek Orthodox, five to the Armenians and four to the Catholics), steps lead down to where a replica of the original 14-pointed star marks the spot. At one side, the Chapel of the Manger exhibits the Nativity, while the Altar of the Adoration pays tribute to the Three Wise Men. Small and slightly claustrophobic, it is best to visit the Grotto before or after a tour group. 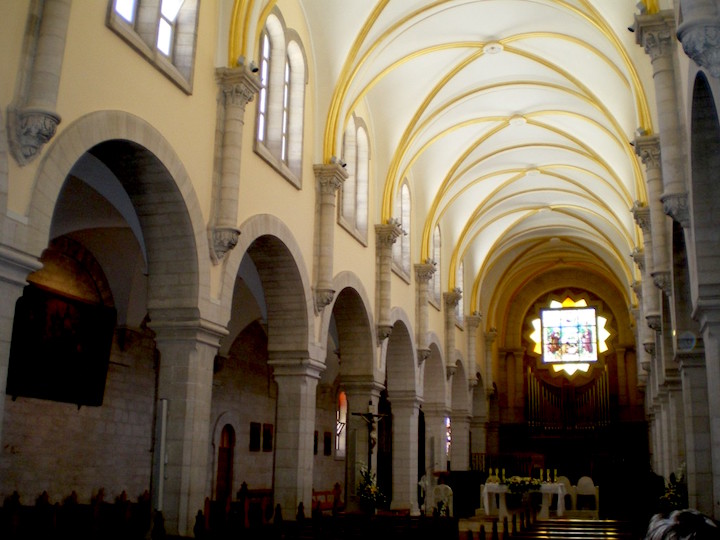 Church of St. Catherine of Alexandria

Adjacent to the Church of the Nativity is the Franciscan Church of Saint Catherine of Alexandria. Although expansion took place in 1882, records show the Church’s first existence in the 15th century. The location also supports the ruins of a 5th century monastery affiliated with St. Jerome, a statue of whom stands in the cloister. Moreover, it is from the altar under this vaulted ceiling that the Church broadcasts its yearly Christmas Eve Mass to the world.

This is one of the many numerous celebrations that occur in Bethlehem among the various Christian denominations during this holy time. Services and processions alike take place not only in the Church of the Nativity, St. Catherine’s and Manager Square on December 25th, but also on the respective dates of January 5th , 6th and 18th. There are also services on Christmas Eve in Shephard’s Field, which is east of Bethlehem in Beit Sahour.

Visitors, of course, can visit the Church of the Nativity and Saint Catherine’s on their own, but for those who are in search of a personal tour, private guides are also available for hire in Manger Square.

Transportation by bus from Jerusalem to Bethlehem is an inexpensive and easy way for the independent traveler. Arab bus 21, which departs from the bus station across from the dizzying array of activity of Damascus Gate on Süleyman Street , runs frequent service to and from the West Bank. At 6.00 NIS (New Israeli Shekel) one-way, it is an approximate 40-minute ride with various stops along the route. Be aware that other buses will offer their transportation services to Bethlehem, as well, but will want to charge an extra and unnecessary fee for passing through a checkpoint. Upon arriving in Bethlehem, the bus drops passengers off at the last stop near al Cinema Square.

At the end of one’s visit, bus 21 picks up passengers along the main road in front of the olive tree grove, which is downhill from the square. There isn’t a bus stop sign per se, but it’s clear that it’s the place to be.  It is also absolutely imperative to bring a passport for this trip, as there is an Israeli checkpoint to pass through when returning to Jerusalem.

Bethlehem is not only a place for the faithful, but it also makes for a worthwhile journey to the West Bank. 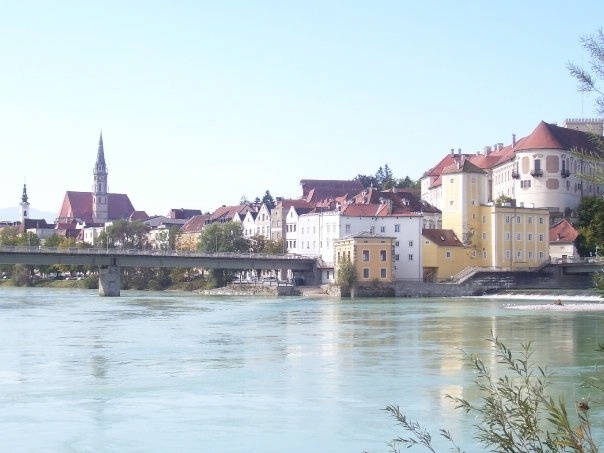 On the direct route from Vienna to Salzburg and vice versa, the train makes several stops. Know where you can transfer and when to make travel...

by jason Hall, Breezy autumn sightseeing and Christmas at Rockefeller Center are still the top attractions to New York for vacationers, but summer in...