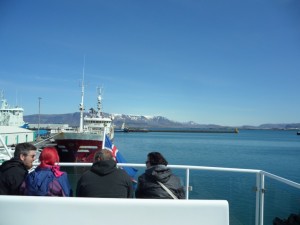 At long last we arrive at Keflavik Airport some thirty miles east of Reykjavik! I may have dozed on the IcelandAir flight between Goose Bay and the Labrador Sea half way to Narsarsuaq, Greenland and the great land mass of glacial ice. Perhaps next time we’ll plan on touching down at Nuuk, Greenland for an Ice Age visit. But now we boarded a bus for Reykjavik, and I couldn’t help our hearing a conversation between an old rural New England man and a young woman from Boston. The gentleman said, “I know Boston–it’s a place that makes me feel claustrophobic. I’m picking up a flight out of Reykjavik bound for Isafjordur for a 21 day stay in this remote fishing village in the northwest corner of Iceland. I think that’s my kind of place.” The Bostonian responded with a “Hmm.”

Well if only a place like Isafjordur is isolated enough for him, thought I, what the heck is all this vastness of lava fields, snowy plateaus and white humps of glaciers down here in southern Iceland is good enough for? We drove through landscapes of space like none I had ever witnessed before. My God, what a marvelous place is this!

But both my wife and I felt a bit weary after a nighttime flight from New York on IcelandAir. We were delighted that our hotel let us have our room at 8 a.m. as we both needed a nap before taking a whale watching cruise out of Reykjavik harbor at noon.

Within minutes, or so it seemed, we headed out of colorful Reykjavik harbor with its blue, gray, yellow and red-roofed buildings fading in the distance. But before proceeding far out into Faxafloi Bay, our ship slowed down near several small, treeless islands packed with birds including colorful orange-billed puffins, arctic terns, guillemots and gulls. It reminded me much of my birding trip to Newfoundland. 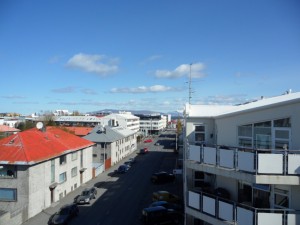 But whales remained our objective as we sped up heading out to sea. We felt the sting of 38 degree wind as opposed to a warm and muggy mid-May in New York. The huge snowy bluffs of the Icelandic seacoast looked exactly like those described by Pierre Loti in his classic nineteenth-century novel Iceland Fisherman. But we all intended to be fishers, not with harpoons and hooks, but with eyes.

There are over twenty different species of whales off the Icelandic shores including Humpbacks, Minkes, Blues and Orcas. The captain announced over the PA that harbour porpoises could be seen surfacing at 2 o’clock off the bow. They were too far off, but we did see their splashing movements for a few seconds.

We continued farther out into Faxafloi Bay with Reykjavik gradually disappearing to the north. And then, a large Minke whale surfaced just off the starboard bow to splash back in and vanish to the depths below combing for tiny fish and plankton, Within a half hour or so, we spotted two or three more Minkes surfacing after trying to fill their stomachs with arctic krill and plankton by combing the sea bottom with open mouths. A Minke whale can consume up to one ton of food per day. They need to do so as the food in tropical seas (where they spend winters) is not as plentiful as it is here in Iceland where they flourish during the summer months under skies that never darken. 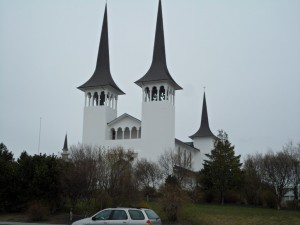 Out here in Faxafloi Bay, it had become so cold (May 16th) with biting winds, that we retreated to the warmth of the galley for some hot and flavorful Icelandic coffee and chat with new acquaintances from Colorado Springs, Colorado. They had planned on renting a car the next day to take the coastal highway all the way around the island, but they were told not to drive too far northward as the roads remained snow-packed and icy. I wondered about the old codger from New England staying in Isafjordur. Hope he had some winter clothing!

Reykjavik gradually reappeared, dominated by its national cathedral high above the rest of the city of some 170, 000 people, about half of Iceland’s population. As we said goodbye to our new friends, we looked forward to an all-day “Golden Circle” tour the next day under bright and sunny skies. After a nice cordial of Icelandic Crowberry liqueur, we went to sleep with a red northern sky shining through our hotel windows. 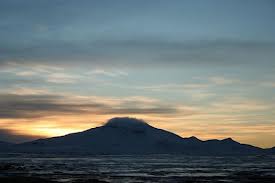 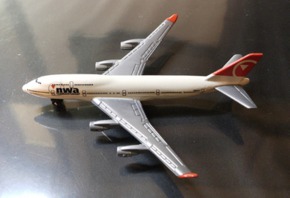 Preparing Kids for the Airport Adventure

by Miles Young, With today’s security rules, traveling through the airport is more stressful than it is exciting. Though you... 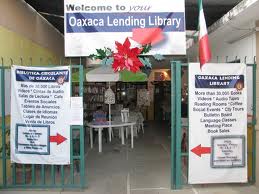