The end of the Romantic Road in southern Germany climbs to the village of Schwangau, about 60 miles southwest of Munich, the gateway to Bavaria,and probably the beer-drinking capital of the world. Two of the most famous Bavarian castles from the nineteenth century tower above the village: Hohenschwangau, where King Ludwig the second of Bavaria (1845-1886) spent many happy summers as a child, and Neuschwanstein. 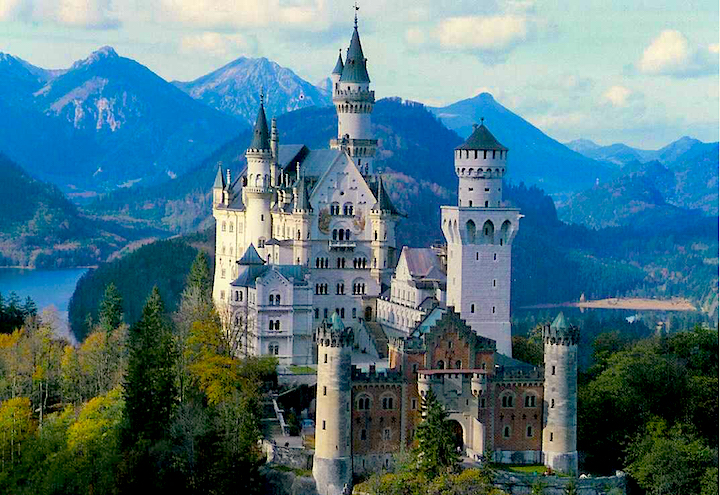 They are set against the backdrop of the steeply rising, mighty peaks of the Alps, on a stage of picture-book-perfect scenery of forests and lakes. These breathtaking castles, which cast their reflections in the lakes below, have fascinated many admiring visitors for years.

Ludwig was a ruler in a troubled time. His first years on the throne brought several major disappointments, such as a broken engagement and war between Prussia and Austria, leading to Bavaria’s loss of sovereignty in 1870. Ludwig’s psychological escape mechanism was to withdraw more into his own dream world, peopled by heroic medieval knights.

Sometimes fairytales do come true. They certainly did for the great composer Richard Wagner (1813-1883), the idolized fatherly friend of Ludwig. The complicated friendship between these two men is embodied in Neuschwanstein, a fairytale castle which appeals to everyone’s collective unconscious. It’s a magical, mystical place, redolent with old German myths, where we can imagine slaying dragons, rescuing damsels in distress and overcoming all manner of hardships.

In this castle, unlikely opposites are interwoven into one gloriously harmonious whole: the young, inexperienced king and the older, more experienced composer; possible madness and indisputable genius; beauty and light, with dark, brooding secrets and problems; earthly delights and religious themes.

Nowadays, Ludwig’s castles are enormous revenue earners, but financial difficulties affected both Ludwig and Wagner. Wagner, deeply in debt, was saved only by Ludwig’s generous patronage. Ludwig spent millions of gulden on his castles and was eventually declared insane by his ministers, who feared he would bankrupt the state. However, there was no consensus as to his insanity. 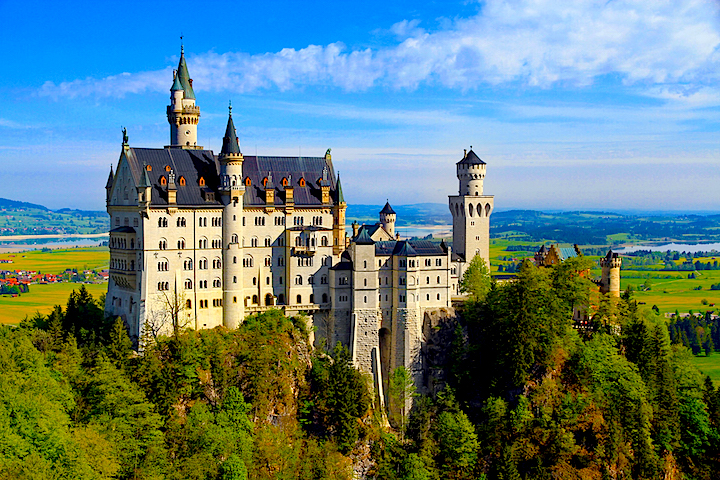 Ludwig’s famed generosity, passion for building, interior decorating, and love for Wagner and his works all came together in Neuschwanstein. The first opera he ever saw was Wagner’s “Lohengrin” at age 16, which left a lasting impression.

In 1868 Ludwig wrote to Wagner telling of his desire to build a castle in the neo-Gothic style near Schwangau. The plans for the castle used theatrical sets from Wagner’s operas as models. The upper courtyard was built after a set from “Lohengrin”, and the Minstrels’ Hall on one scene from “Tannhauser”. The other main room, the magnificently decorated Throne Room, was intended as the castle’s Hall of the Holy Grail.

The corner stone was laid in 1869 and Ludwig checked every detail of the work in making his dream castle a reality. A frequent decorative motif is the swan (Schwann), the heraldic animal of the Lords of Schwangau, and a natural link with the Lohengrin legend of the Knight of the Swans. The motifs for the glorious wall paintings were the old legends that had prompted Wagner to compose his operas: Lohengrin, Parsifal and Tannhauser.

The interior is extravagantly ornate. When you enter, the first reaction is one of stunned disbelief: “this can’t possibly be real!” The overriding impression is one of sumptuous gilding, and a dazzling multiplicity of colors and designs. Bursts of color, gold and blue embroidery, elaborate wood-carvings, chandeliers and rows of marble columns lead to the next reaction, of respectful reverence, to be in the presence of such magnificence. Opulence is often not beautiful, but this interior is both—exorbitantly opulent, but undeniably beautiful (note that no photos allowed inside).

Ludwig only lived here for 170 days before his death in 1886. Wagner himself never lived here, although his influence is all-pervasive. In the final count, Neuschwanstein was intended to be a “temple to Wagner,” as the king made clear in his letters “to his dear friend.” And that certainly seems to be the case.

Ludwig’s legacy, with its Wagnerian leitmotif, lives on, seemingly floating in the clouds. You can almost feel the spirit of Wagner’s hauntingly beautiful, powerful music wrap itself around you as you wander through the castle. Every September, concerts are held in the Minstrels’ Hall and the real music lives again, mingling and blending with its mythical origins.

To visit inside you have to take a guided tour. It’s advised to buy tickets beforehand, as it gets very crowded. Ticket information here: neuschwanstein.de

As you wander around outside the castle, don’t forget to go on the Marienbrücke, a bridge that offers for fantastic views. 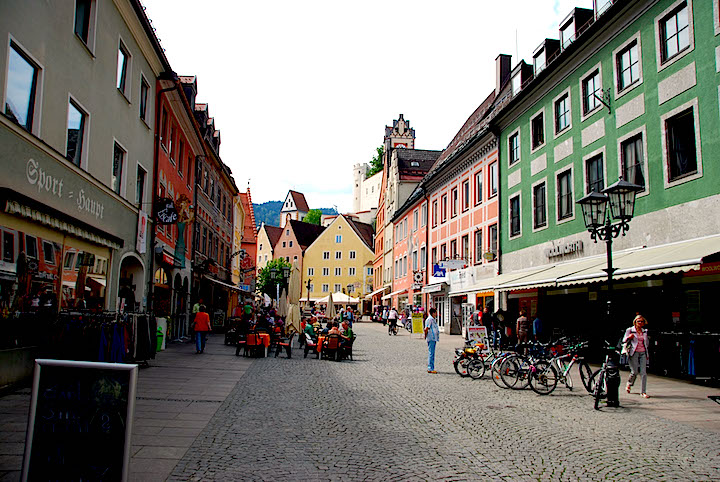 A street in Füssen

We drove south along a portion of the Romantic Road and ended in the historic, old town of Füssen, close to Neuschwanstein. It’s a lovely place to stay for a couple of days, providing an opportunity to visit the castles and the surrounding, picturesque countryside. Füssen is on Lake Forgensee with 11 other lakes nearby for water sports and boat trips. There’s also a great network of footpaths and bike routes. 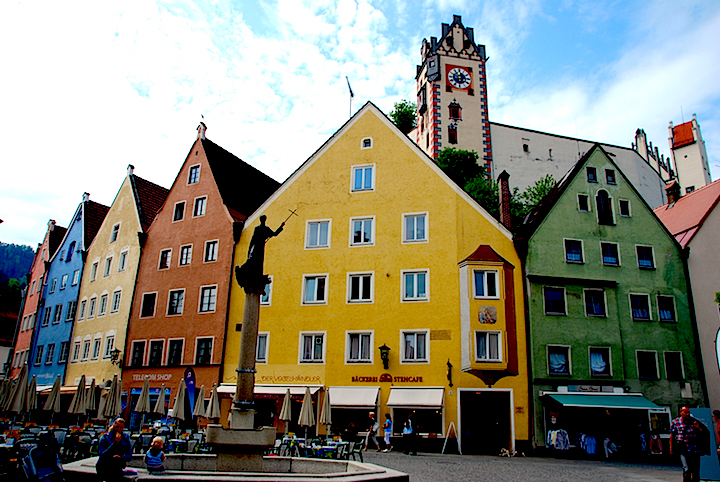 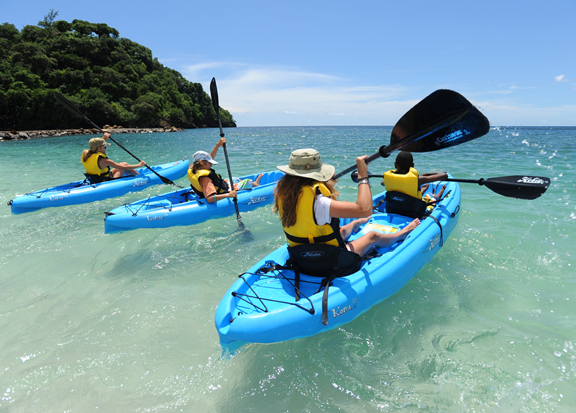 Top Destinations of Italy – A Complete...

Italy is well known for its history, arts and architecture. It is also known for its beauty and enigmatic landscapes. When you visit Italy, you must... 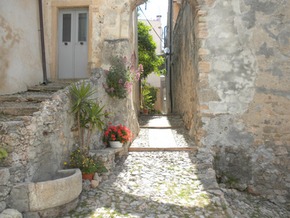