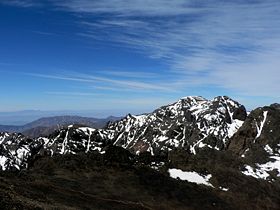 Due to a significant loss of habitat, plant and animal species started to disappear so the Moroccan government created their first national park. In 1942, Toubkal, in the Atlas Mountains became the first of Morocco’s national parks. Souss-Massa National Park, created in 1991, is Morocco’s most recent addition.

Creating these National Parks in Morocco has worked well in protecting the native plant and wildlife species and has prevented the extinction of the Bald Ibis, Barbary macaque, African marsh owl and the Spanish festoon butterfly. Only 0.01% of Morocco’s land is currently protected territory at the moment. However, there are plans to establish other national parks in the Moroccan Sahara desert and Atlas Mountains in the next few years.

Toubkal National Park is 70km (43 miles) away from Marrakesh and it is a must-visit destination for any wildlife enthusiasts on their Morocco holiday. The park is in the High Atlas Mountain range and it covers an area of 380km (939 acres). Jbel Toubkal is the highest peak of the park at 4,167 metres (13,671 feet).

The park is an ideal place for nature lovers, hikers and a families and is one of the most visited tourist attractions near Marrakesh. The park is easily accessible from any part of Marrakesh as you can rent a car or get a local driver to take you there.

Inside the national park, there are some of the most spectacular sights and you can also go on one of the adventurous treks offered. If you have the kids with you, make sure beforehand the hike won’t be too arduous for them. If you have some time, take the opportunity to visit the biggest village in the region, Imlil. There are quite a few villages of varying sizes in the valley of Ait Mizane, where the national park is located.

If you would like to gain some insight into Morocco’s rural life,then a walk to the villages will offer you the chance to do just that.

Imlil is the starting point of the long trekking route to the villages. Imlil has modern facilities and there is also a car park in the village centre. You’ll find the basic necessities in the region’s villages– eating outlets, cafes and other shops. Imlil is the centre of mountain tourism in Morocco due to its unique position. From here, 90% of visitors head up to Toubkal, the highest mountain in Morocco. Imlil,  the end of a tarmac road, is a good place to hire mountain guides and mules for the onward trek. Imlil was created to cater for the large numbers of tourists pouring through, en route to Toubkal.

The best time to visit the Toubkal National Park is during the spring. Many visitors come to the national park during this season due in part to the cooler weather and to view the blossoming trees, making it the perfect  setting for photos and scenic walks to the highest point. The Toubkal National Park should be avoided in the summer months as it can be very hot. The park is inaccessible in the winter as the roads are covered in snow. However, May onwards, the ascent to Mount Toubkal is relatively easy but be cautious to avoid altitude sickness. If climbing up Mount Toubkal, bring sturdy, broken in hiking boots and wind resistant clothing. Trekking poles can also be useful when climbing the summit. It is possible to climb the mountain in two or three days first stopping at the refuge of Toubkal, then on the second day reaching the summit and then going back down to Imlil.

The Souss-Massa National Park is located near Agadir. There are many national parks in Morocco but the Souss-Massa has the most spectacular variety of bird species found in Morocco. The Moroccan authorities are taking various steps to protect the habitat and the wildlife of the park.

The Souss Massa National Park is extremely beautiful and is a great destination while travelling in Morocco. It has a diverse terrain that ranges from rocky cliffs and fields to dense forests and endless beaches. The park is well known for its extensive range of migrating birds and bird species. Avid bird watchers flock here. Visitors to the park can look forward to seeing Booted Eagles, Spoonbills, Great Spotted Cuckoos, Purple Herons, Swallows, Bee-eaters, Barbary Falcons, Marbled Ducks, Hoopoes and Ruddy Shelducks just to name a few of the 275 species of birds known to inhabit the park.

The birds share their stunning surrounding with other animals including the African Wild Cat, Leopard Lizards, Weasels, Red Fox, the Jackal, the Algerian Hedgehog and also a wide range of rare amphibians and reptiles.

The main reason tourists make the stop at Souss-Massa on their Morocco tour is because they are hoping to see the Northern Bald Ibis. The Souss Massa National Park is one of only two parks that are home to the endangered, Northern Bald Ibis. The number of this species has been so dramatically reduced in recent years that there are believed to be only 100 breeding pairs remaining – of which 75 are located in the Souss Massa. Ten years ago, the park was home to 33 breeding pairs but due to major conservation and breeding program put in place by the Moroccan government, the numbers have doubled. You can visit the park year round but November is a particularly good month for exploring the coastal wetland sites as the winter migrants arrive. March to May is the best time to see a wide range of migrants and residents. For more inspiration and help building your perfect trip to Morocco, visit: www.moroccotravelplan.co.uk

Hankering for a taste of the Wild West? Cody, Wyo., has you covered. Just outside Yellowstone National Park, with daily flights from both Salt Lake...