If you drive Interstate 80 west of Cheyenne, Wyoming for thirty miles, you will see an exit for Vedauwoo, tremendous granitic rock formations that rise northward over 150 feet above the rolling sagebrush and grassy high plains of Wyoming. They harbor a forest of ponderosa and lodgepole pines along with golden aspen, Colorado blue spruce, Douglas firs and over 250 sub-species of willows that turn rusty-red during the months of September and October. 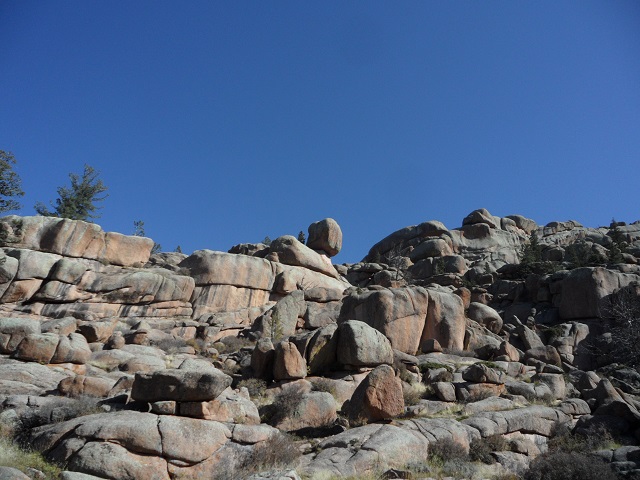 These rock formations (called Sherman Granite) are over 1.8 billion years old with some slightly younger pink granite fusions that are 1.4 billion years old that were slowly uplifted from sea level to over 8,000 feet during the Laramide Orogeny. 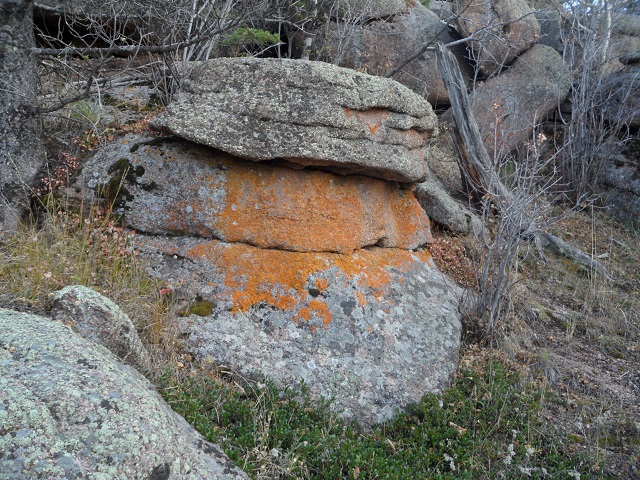 Their name—Vedauwoo (pronounced Veedavoo)—is an Arapaho word meaning “Earth-born Spirits.” This tribe, that once occupied the Front Range of Colorado and Wyoming and now live in the Wind River Indian Reservation near Lander, Wyoming, believe that Vedauwoo is a kind of spiritual vortex where everything inter-communicates. Rocks talk to the sky, and ravens whisper to the rocks, while wild strawberries speak with bracken ferns and humans listen to roving moose who talk with wind-blown pines. If you camp here overnight, you, too, will begin to listen to the trees and wind. 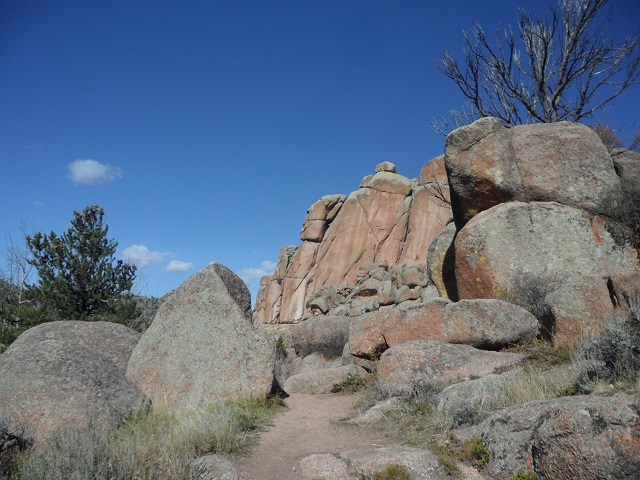 After stopping at the entrance station a mile or so from the interstate, drive straight ahead to the Turtle Rock trailhead parking area. Turtle Rock is a gigantic turtle-shell like rock far above your head. You probably will see climbers scaling the fissures and cracks to the summit. When my son Rich was a high school kid in Laramie, he joined the rock climbing club to scamper up Turtle Rock many times and also a rock formation called The Potato Chip (that you can see to your right as you drive toward the entrance station). The Potato Chip lurches out over 60 feet of empty space that can be free-repelled before you dance off the lower rocks as you hoist yourself down with your rope to the base. 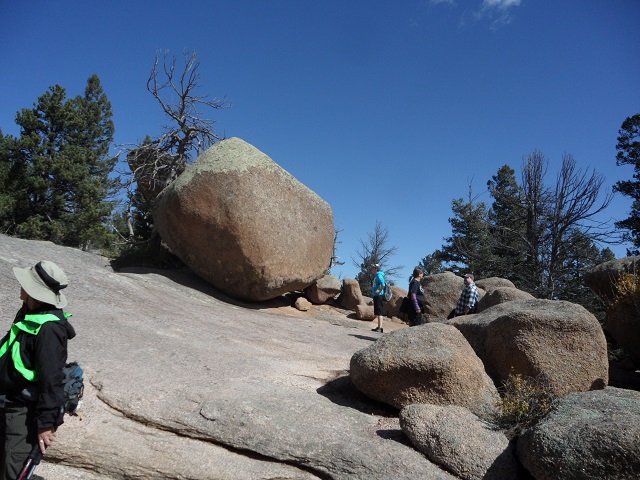 You can begin your hoof on the Turtle Rock Loop Trail through groves of aspen down to marshy grounds to your left that just might have a moose or two grazing the tasty marsh grasses. For a moment or two you might think you’re in Yellowstone. The trail will lead you past a large pink granite pharaoh-head rock with bushes growing out of its fissures as if to replicate the pharaoh’s beard. Colorado blue spruce and Douglas fir line the trail that ambles up over rocky ledges toward the north side of Vedauwoo. Fir needles are soft and flat while spruce needles are sharp and pointy—an easy way to tell the difference between fir and spruce. These flat ledges provide a great spot to sit down, relax and take a drink of water. Here, too, is a great place to compose some trail-side poetry, say like an amulet. An amulet lends itself beautifully to show inter-relationships of rock, tree, human and animal. An amulet’s first line and last line are the same and the last few words of the first line become the first words of the second line and the last few words of the second line become the first words of the third line and so on. The poem can be short or long, you choose. Here is one I wrote at Vedauwoo:

fire that warms not the flesh,

not the flesh but the spirit,

the spirit of one in quest,

in quest of wild Nature,

wild Nature that rises within,

within the person revived by 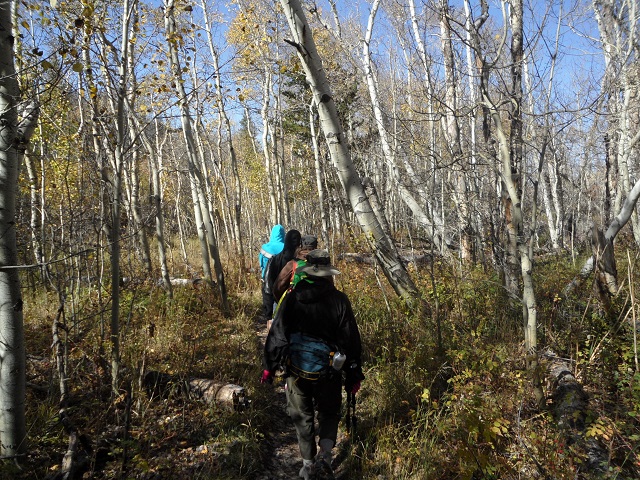 The Turtle Rock trail proceeds eastward along the back side of Vedauwoo and crosses a trickling stream that flows through aspen and willow groves. Within a half hour or so past this stream, it comes around to the front side of this collection of lichen-covered rocks that look like giant artists’ palettes. You’ll almost not want to go back to your car at the end of the three-mile loop, unless you’re hungry and want to drive the interstate on to Laramie to see what a nice hot lunch you can find along Grand Avenue. 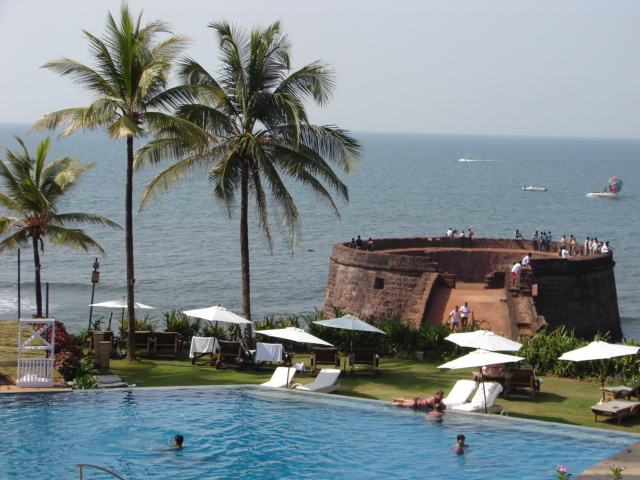 by Andy Paolacci If you’re traveling to Goa, India, visiting Fort Aguada is a must for any tourist in search of engaging history, discovery and... 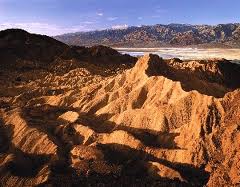 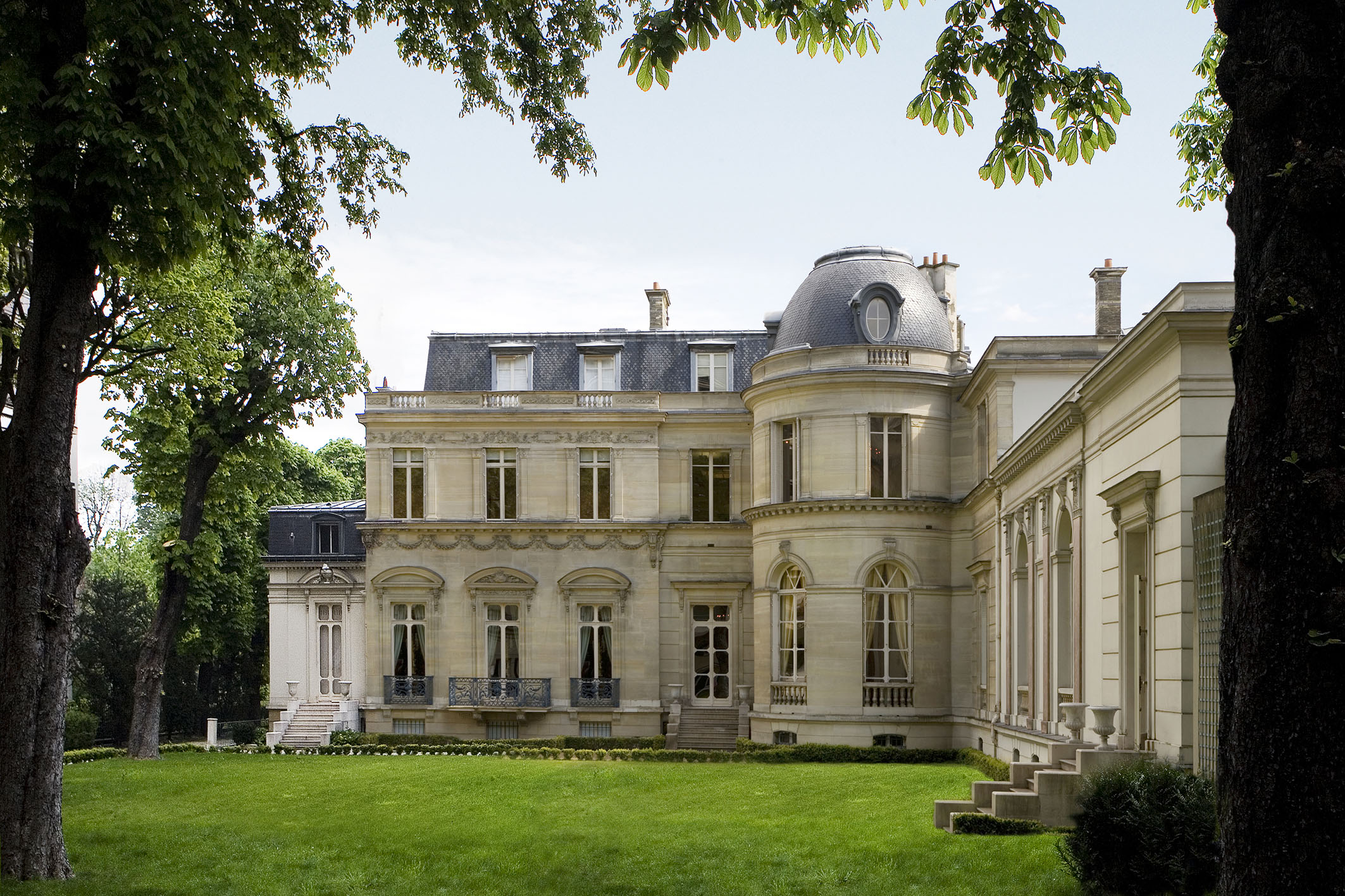 by Janine Lea Oesi, On the outskirts of Paris in the 16th arrondissement, this museum dedicated to Monet houses works not on display anywhere else in...