The U.S. boasts an incredible variety of terrain and scenery, and wonderful National Parks. To enjoy some of them, there are specially-listed scenic routes, but you can find beautiful stretches of highway just about anywhere you look.

New England has numerous drives, especially lovely during the fall, and one such is the Mohawk Trail through the Berkshires in western Massachusetts. 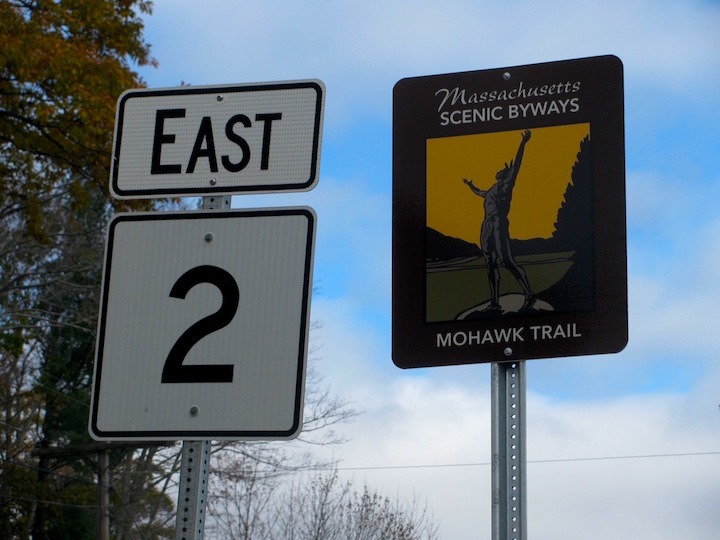 We were there one weekend in October for a family wedding and found it enchanting. It’s a pretty part of the country, with little towns strung along the river valleys, and the fall colors were gorgeous. It’s interesting to note that this is where Indian tribes used to live and hunt and that as we drove along the Trail, we were, in a way, following in the footsteps of the first people in this area.

The Mohawk Trail began as a trade route for the Native Americans of the Five Nations, connecting the Atlantic tribes with those in Upstate New York hundreds of years before European settlers arrived, and used it to pass between the Connecticut and Hudson Valleys.

These days, the Trail is part of Routes 2 and 2A, following much of the original Mohawk Trail for about 69 miles, from Williamstown (home of Williams College) in the west, to Greenfield in the east. When it was incorporated in 1753, Greenfield was the northern frontier before the Canadian border.

There are stopping points along the way, with scenic viewpoints, roadside attractions, and gift shops. The road is narrow and winding, and the multiple layers of rolling hills are quite gentle; although, there is a steep climb up to Mount Whitcomb, the highest point of the Trail at 2173 feet. On the western side is the popular hairpin bend and lookout at Western Summit (called Spirit Mountain by Native Americans) over the city of North Adams. On the eastern side, the highway descends steeply down the slope of the Hoosac Range (note the “Elk on the Trail” statue at Whitcomb Summit). 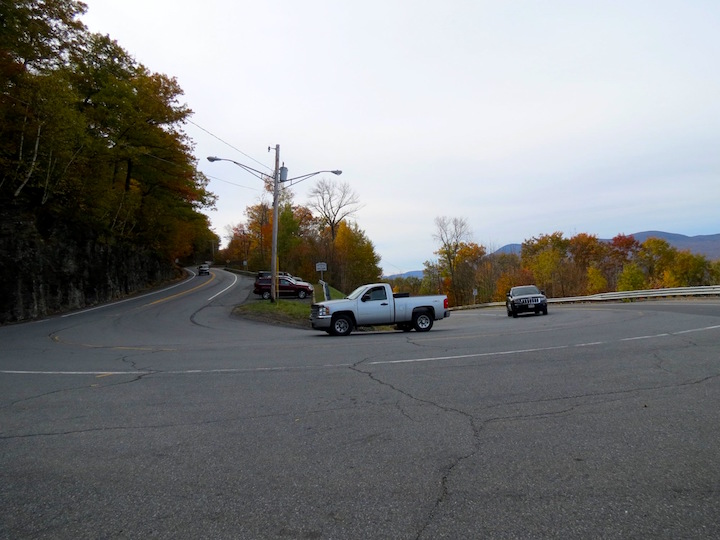 Each new vista around a sharp corner had us “oohing and aahing.” The prettiest section (we thought) was between North Adams and east to Charlemont, where the route winds along the edge of the Deerfield River. If you stop at some of the roadside lookouts next to the gurgling river, you’ll find the sound of the water very soothing. The river was gentle then, but it gets much fuller in spring and summer—perfect for tubing and whitewater adventures. In summer, camping, hiking, horse riding, fishing, zip-lining are also offered, and there’s also an active winter sports season. We passed a couple of ‘Bear Crossing’ signs and wondered how often they’re still seen around here. 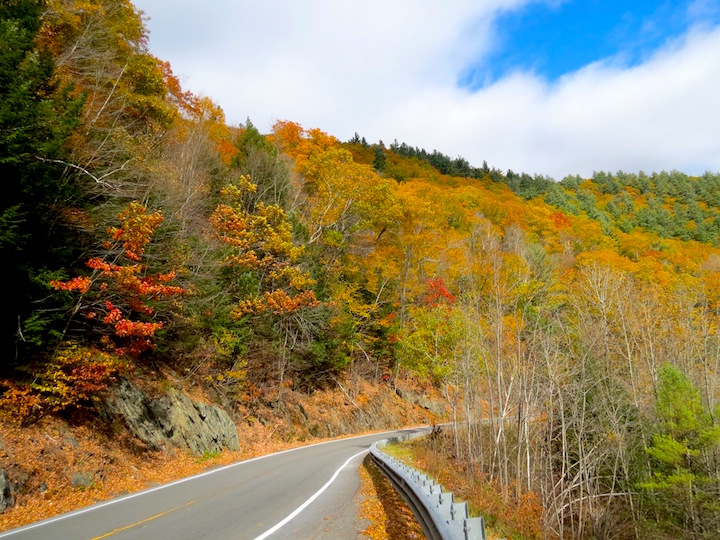 gorgeous scenery along the way

The Berkshires are very popular with tourists because of the vibrant arts, music and recreation scene, with a number of good museums (for example, MASSMoCA in North Adams); performing arts institutions, like Tangelwood, and it’s the summer home of the Boston Symphony Orchestra, to name but a few. 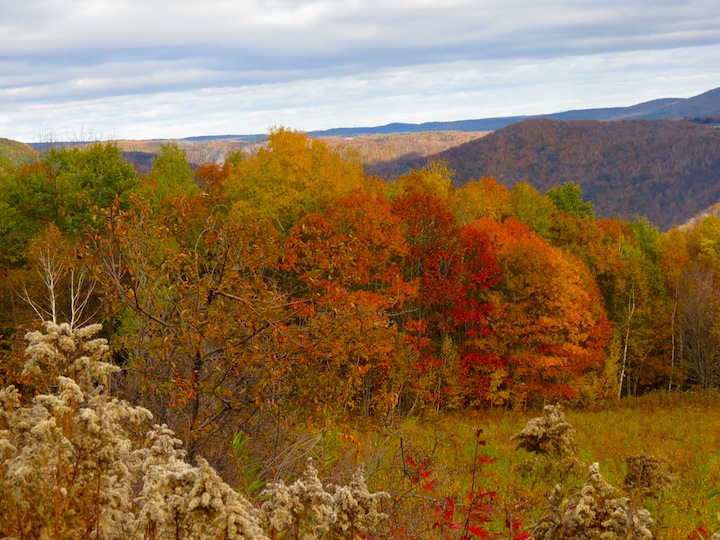 view of the Berkshires

The name Berkshires came from Sir Francis Bernard, the Royal Governor in office from 1760 to 1769,  who named the area “Berkshire” in honor of his home county in England.

If you only have a few days, here’s what we suggest:

Whitcomb Summit Retreat, 229 Mohawk Trail (about 15 minutes from North Adams and near the Elk statue). You can easily drive to places from there.  Their motto is “Stay at the Top”—the views are truly spectacular. 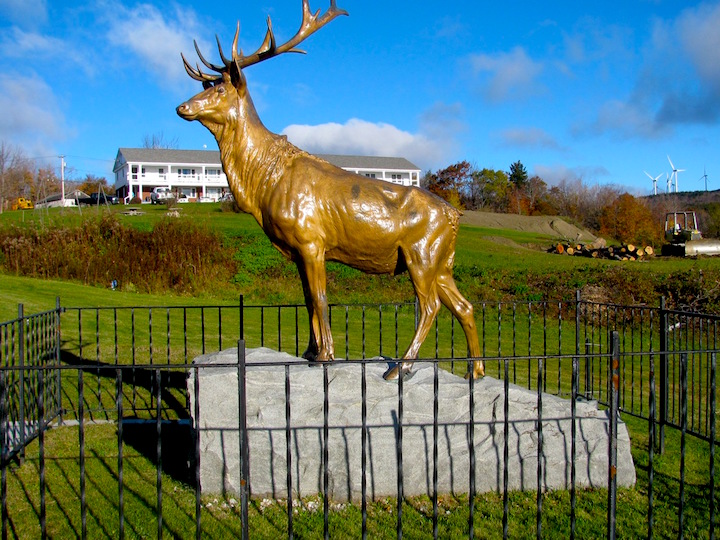 the Elk Memorial on Whitcomb Summit

Or, you could stay in North Adams at the Holiday Inn, 40 Main Street.

A good breakfast place is Renee’s Diner, 780 Massachusetts Ave, and Brewhaha is a lovely coffee shop at 20 Marshall Street.

We had excellent meals at Public Eat and Drink, 34 Holden Street in North Adams and at the Golden Eagle at the famous hairpin bend, at 1935 Mohawk Trail. MASSMoCA has a café, called Lickety Split, and a restaurant called Gramercy Bistro.

First, do the drive between North Adams and Charlemont and stop to visit the Hail to the Sunrise statue, a memorial to the Mohawk Native Americans, sponsored by the Improved Order of the Redman. Also stop at the Elk Memorial on Whitcomb Summit. 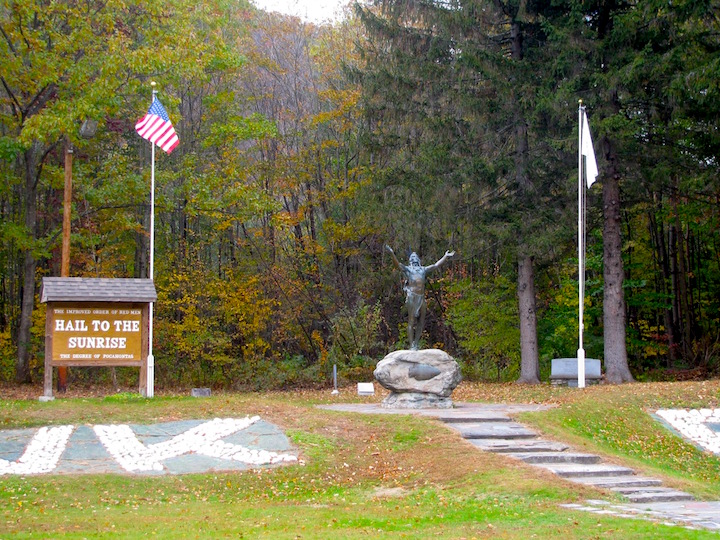 the small park with the wonderful Hail to the Sunrise statue

If you have a clear day, visit the Natural Bridge State Park, just outside North Adams. It’s an easy, pretty walk and well worth the view of North America’s only natural, water-eroded marble bridge, created by the Hudson Brook. It’s about 550 million years old, is 30 feet wide and spans a chasm about 60 feet deep. 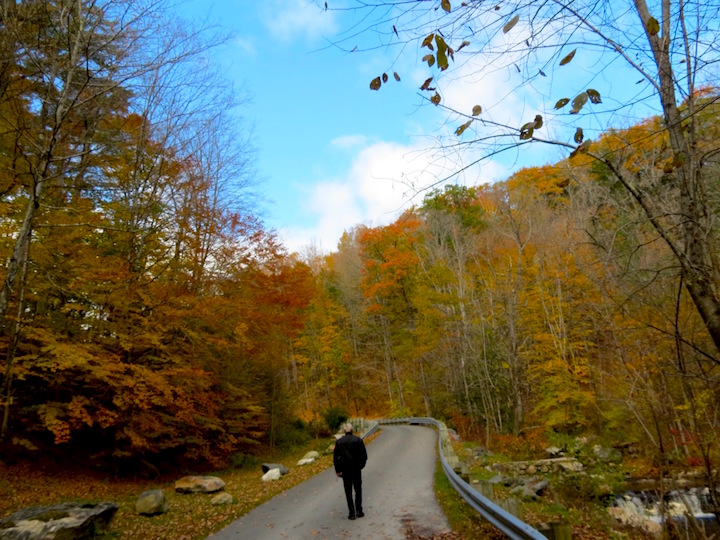 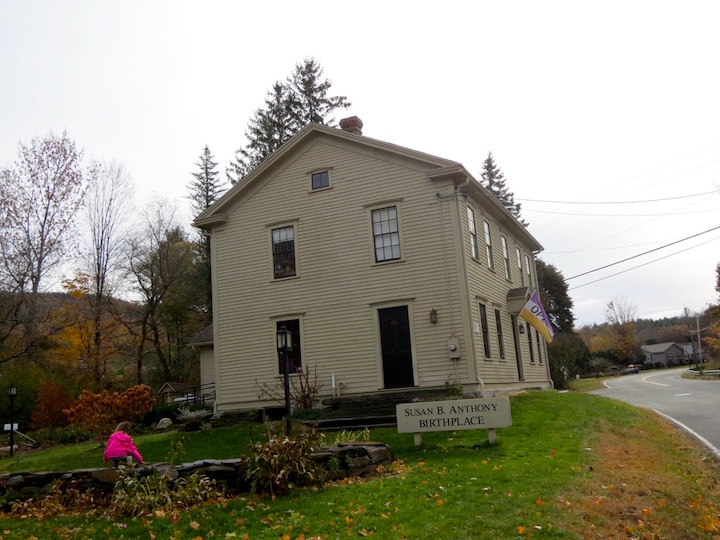 Susan B. Anthony’s birthplace in Adams

In North Adams, visit MASSMoCA (Massachusetts Museum of Contemporary Art), which is the largest Contemporary Art Museum in USA, and be sure to check out the colorful murals on the wall on the nearby underpass of Route 2.

A must-see is the Western Gateway Heritage State Park in the center of North Adams. This restored freight yard district has a variety of historical attractions, including an exhibit on the construction of the Hoosac Tunnel.

North Adams was once a railroad and manufacturing hub, producing textiles and shoes and using power generated by the Hoosic River. The MASSMoCA is in the largest of the old mill buildings on site, along with others that have been converted into art spaces, galleries, and little shops.

If you plan to come in autumn, North Adams has a Fall Foliage Festival at the end of September/beginning of October, and there’s a Farmer’s Market on Saturdays, close to the MASSMoCA. 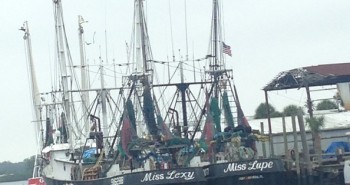 Located half way down the Gulf Coast of Florida, Tarpon Springs is a magical little seaport town of 25,000 people. Believe it or not, it also has the...