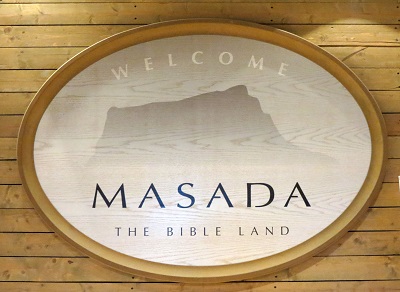 The setting is as impressive and amazing as the actual site and what it signifies. A UNESCO World Heritage Site since 2001, Masada tells the story of three of the main events in the history of Israel: Herod the Great, the Israeli Rebellion, and the Roman Army. This is apparently Israel’s second most visited tourist sight (after the Western Wall), and it’s easy to see why.

What is Masada anyway? 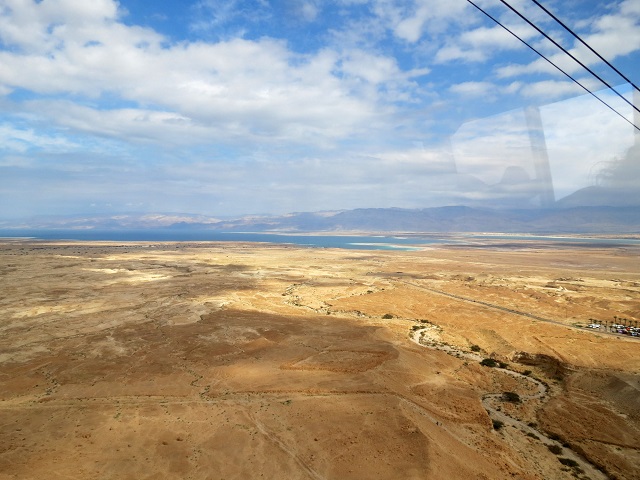 Masada, which means “fortress” in Hebrew, is an ancient fortification King Herod the Great built on top of an isolated, rocky plateau overlooking the Dead Sea on the eastern edge of the Judean Desert. Herod constructed grand palaces for himself between 37-31 BC, partly because he thought it was impregnable and partly to enjoy the health benefits of the Dead Sea. In addition to the natural defensive cliffs, which are more than 800 feet high, Herod added fortifications with a casemate wall and towers. 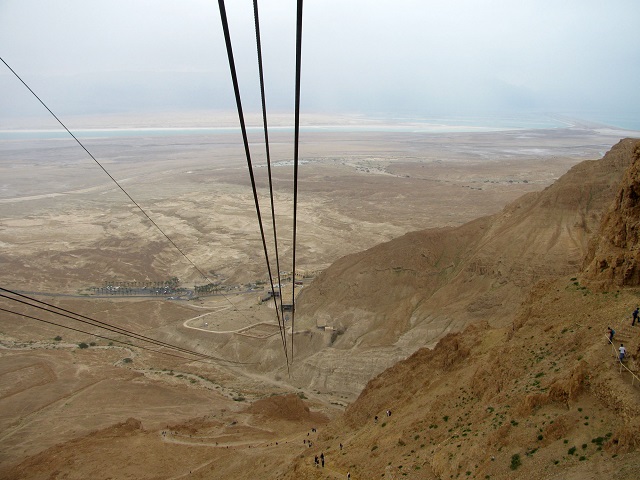 View from the cable car, with the Visitors Center below

The cliffs and mountains that rise above the Dead Sea are spectacular in their brown-gold desert tones. The bright blue of the Dead Sea on one side and the sculpted, brown and cream crags, peaks and hills on the other make for a dramatic place to have a palace and then stage a major rebellion. Add to that a day with billowing, inky-black clouds over the north shore of the Dead Sea, and the view becomes almost dream-like, with a haze in the air and a light rain falling upon the parched desert floor. 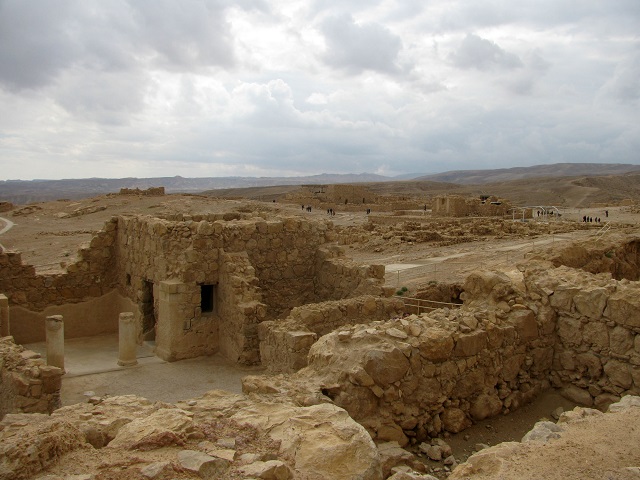 View of Masada from the palace

Almost all the historical information about the Masada Rebellion comes from the 1st-century Jewish-Roman historian Flavius Josephus. As the story goes… a group of Jewish rebels, the Sicarii (so named because they carried small knives called sicaris), overcame the Roman garrison at Masada in 66 AD. When the Jewish Temple was destroyed in Jerusalem in 70 AD, more Sicarii fled and settled on Masada after slaughtering the Roman garrison. A Roman legion surrounded the mountain in 73 AD and built an enormous siege system.Their tactics slowly wore down the rebels, and they ultimately breached the fortress by way of a siege tower and battering ram in 73 or 74 AD. Rather than surrendering or being killed by the Romans, the 960 rebel inhabitants of Masada supposedly set all the buildings ablaze and committed mass suicide. 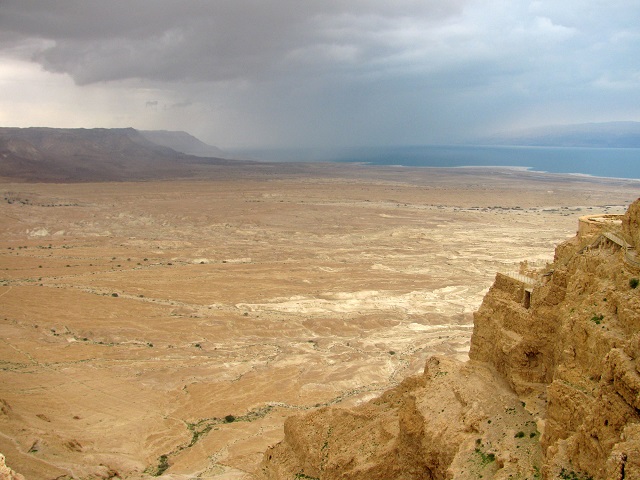 The Roman camps and ramp are clearly visible from the edge of the plateau, and the siege wall, which surrounds the base, is 1.2 miles long and 6.5 feet thick. It is considered to be the most complete examples of such an assault in the world.

Is this place a symbol or a myth? 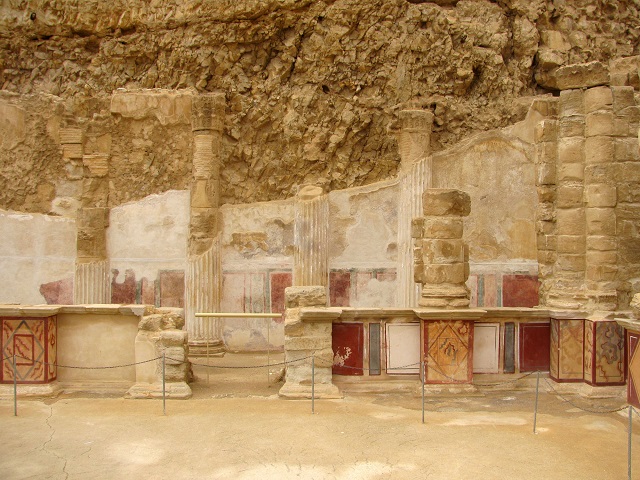 Some see the Jewish rebels’ last stand against the Romans at Masada as a symbol of the struggle for freedom from oppression, and thousands of Israeli soldiers have sworn their oath of allegiance here. Others, however, may see the battle as myth, due to the discrepancies between archaeological findings, including the remains of only 28 bodies found, and Josephus’ own account of the events. 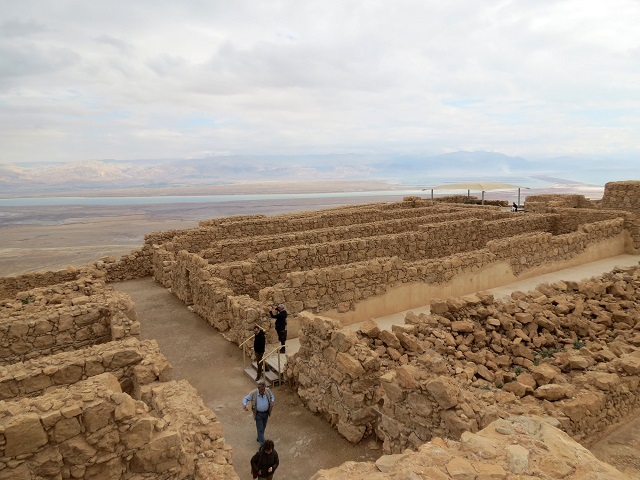 Regardless of whether the story of the mass suicide of such a scale is true or not, this place and the history of the siege are still incredible. It’s a story of bravery, tenacity, and a strong belief on both sides, who were equally determined to win.

What we see today: 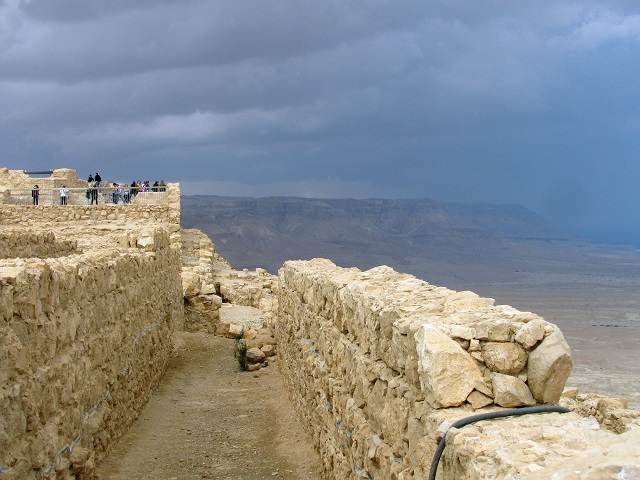 Views of the mountains from the old Water Gate

Monks occupied Masada during the Byzantine period, and the remains of a Byzantine Church from the 5th and 6th centuries are still evident. The mountain remained quiet until it was identified again in the early 1800s, but the first excavations didn’t take place until 1959. Since then archaeologists, especially Yigal Yadin in the mid-1960s, have uncovered the rich story behind this ancient site. Many articles found on Masada, including clothing, baskets, household implements, and hundreds of coins, are now in the Yigal Yadin Masada Museum. 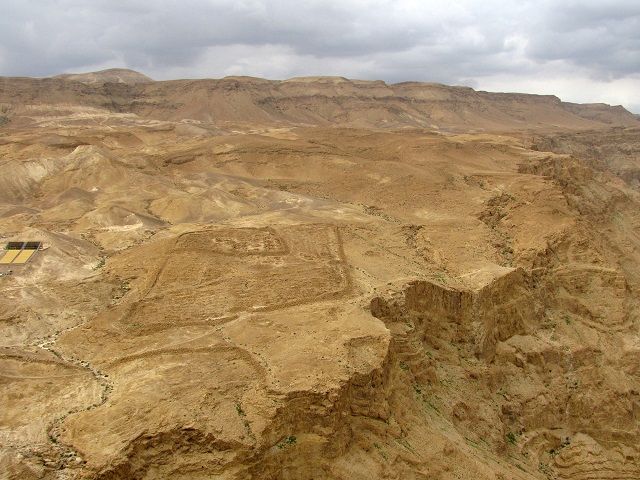 During the Roman era, the old fortress was approached by three narrow, winding paths that led to the fortified gates. Today, visitors can walk up two of them: the Ramp Trail and the Snake Path. Alternatively, there’s also a cable car that leaves from the Visitors Center.

Upon arriving at the top, the Snake Path Gate opens to a sloping, oval plateau more than a third of a mile long. The existing ruins not only reflect the rebels’ story, but they also provide an impression of what a remote gem in the desert this place must have been amid the stunning views of the Judean Hills and the Dead Sea. 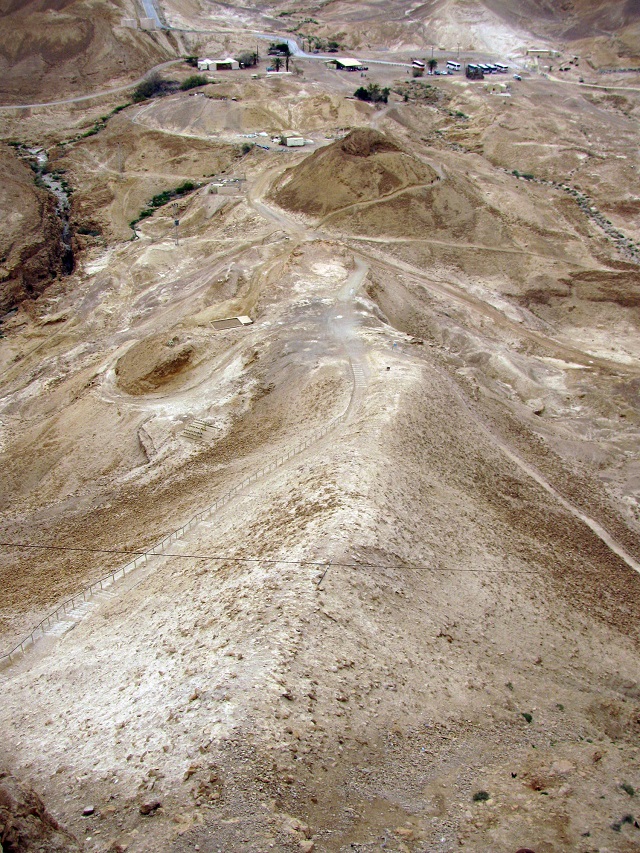 the ramp that allowed the Romans to ascend Masada

The Northern Palace, which Harod had constructed against the northern face of the cliff, is the most impressive structure on Masada. It sits upon three rock terraces, each supported by massive retaining walls to increase their size. The residence was on the top level, with a staircase leading to the middle level where a large, round hall and a colonnade extend almost to the edge of the cliff. The lowest terrace has another columned hall with frescoes and a bathhouse. It is also here where human remains were found, along with sandals, arrows and scales of armor.

Herod had also built barracks, an armory, a large bathhouse for the other residents and 12 enormous cisterns, which collected the flood water to sustain the needs of all the inhabitants. Another important feature of Masada are the 27 large storerooms, which revealed hundreds of clay pots that could hold large amounts of food. The rebels converted Harod’s stable into a synagogue, which became one of the first in the world.

Some people arrive at Masada on a day-trip from Jerusalem, or from the Dead Sea hotel area of En Bokek. However, it’s also possible to stay at a guest house at the base of the mountain. A visit to Masada requires a minimum of 4-5 hours, including time at the Museum and the ascent by cable car.  Calculate more time for the hike up and down the Snake Path or Ramp Trail. Bear in mind that it’s very hot in summer, and it’s highly advisable to bring plenty of water, and wear proper shoes.

Entrance costs 96 NIS (approx. $24), which includes the Museum and return by cable car.  The ticket also includes a map, with a suggested route, pamphlet and a great audio guide.

Caesera: Herod’s City by the Sea 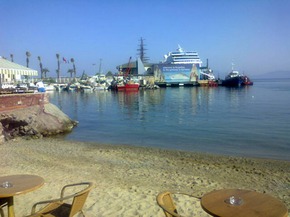 If you get fed up of Istanbul and want to head for the coast, then Kuṣadasi is the place to go. At the moment there are many rooms for rent and... 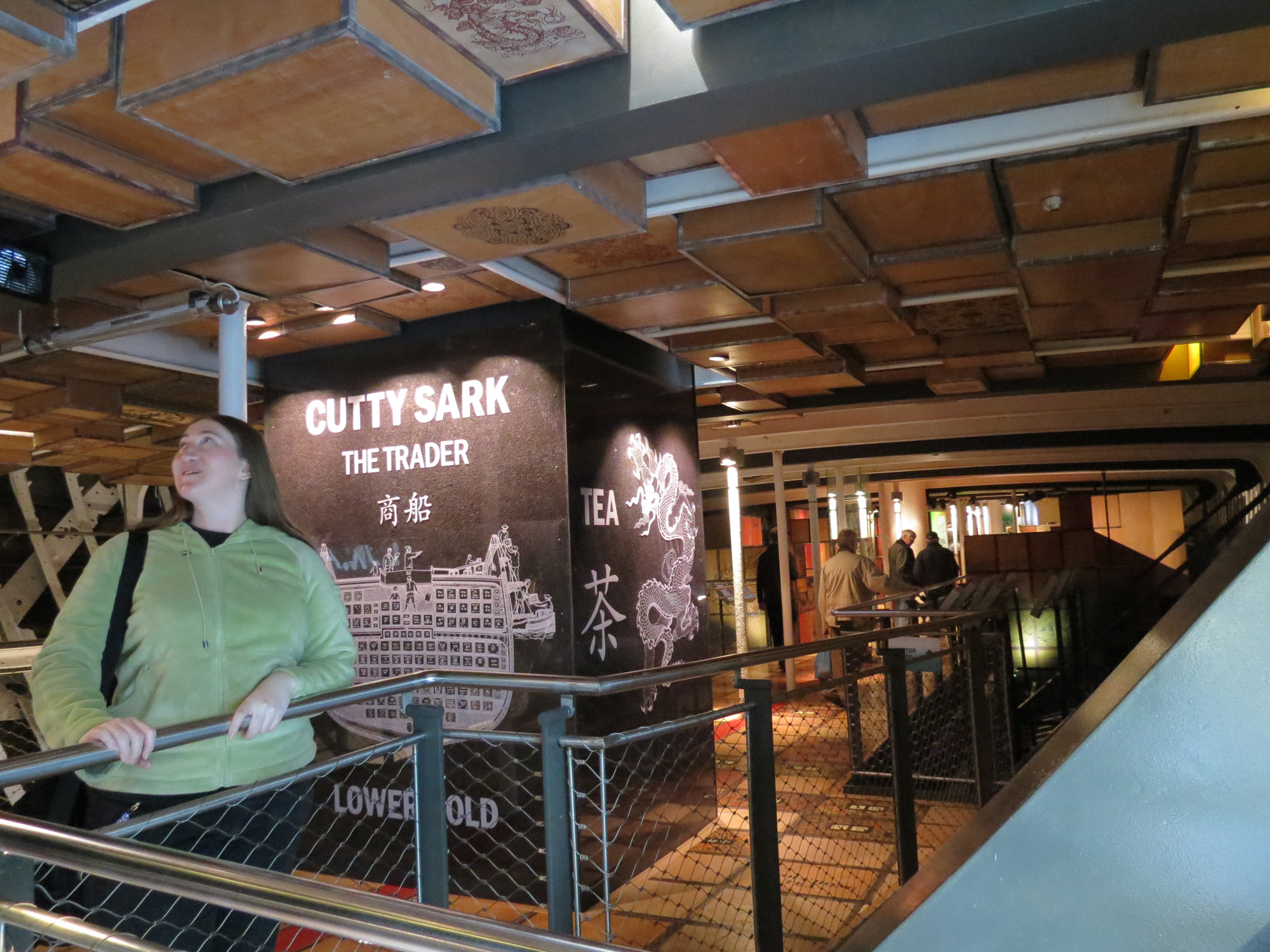 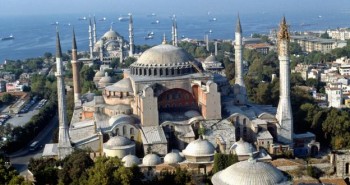 Istanbul—Turkey’s largest and busiest port city—stands as a testament to history at the crossroads of Europe and Asia. Millions... 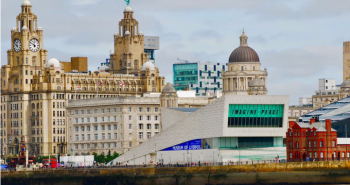