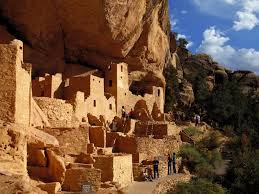 Maura and I, in quest of primal times, left our home one summer morning for Mesa Verde National Park, the ancient home of the Anasazis. The green table lands of southwestern Colorado helped set the mood. As we drove up a long and angular road to the entrance station, Mancos Valley spread below us shimmering in heat waves that contrasted with the distant misty and gray San Juan Mountains blanketed with bands of brilliant snow.

Bright blue pinyon jays fluttered from branch to branch of scrub oak trees along a cliff side, and pinyon pines and junipers scented the dry and cool air. We began to sense the presence of primal times a thousand years ago, especially when a delicate blue and black Colorado Hairstreak butterfly landed on the hood of our slow moving car.

We quickly set up camp under large white cliffs along with scores of other campers. After a light supper and coffee, we began our early evening exploration. Stopping at Montezuma Pass, we gained sweeping views of the four-corner region with Sleeping Ute Mountain to our west and Shiprock rising in the distance to the southwest. Thunderheads built up in a blazing sunset and the distant rumbles put to mind Willa Cather’s description of Mesa Verde in The Professor’s House:

“I’ve never heard thunder so loud as it was there. The cliffs threw it back at us, and we thought the mesa itself, though it seemed so solid, must be full of deep canyons and caverns, to account for the prolonged growl and rumble that followed every crash of thunder. After the burst in the sky was over, the mesa went on sounding like a drum.”

Yes, Maura and I had begun to lose at least a thousand years. Sleeping Ute Mountain on the Arizona border weathered sheets of stinging rain with crooked bolts of lightning as it gathered clouds around its slopes. As the storm approached closer and closer, we drove back to our tent for a night’s sleep hoping we would have a dry day after sunrise. We quickly fell into a deep sleep as rain pelted our tent.

Sure enough, nary a cloud in the sky the next morning. On our way to the major attraction–Cliff Palace–we passed by Far View Ruins excavated in 1916 by Dr. Jesse Walter Fewkes who did much archeological work all through Mesa Verde. These 800 year adobe row houses had been built before the Anasazis descended into cliff dwellings that are cooler and safer against possible enemy attacks. Far View Ruins has up to 100 living spaces and five ceremonial kivas or circular pits each with a sacred sipapu or spiritual entrance into Mother Earth. This entrance way is both for those being born and those dying. The Hopi Indians say that the original sipapu is an ancient volcanic cone in the canyon of the Little Colorado River seen from eastern end of the Grand Canyon’s south rim. Each kiva’s sipapu is in a sense replicating the great sipapu. Canyon wrens chattered to partially bring us back to modern times.

We drove on in our mechanical contraption to the stairway leading us down, down through time and space to the Cliff Palace amid high white sandstone cliffs and bright blue skies. There it stood for seven centuries fusing time and the atoms of our being. We stared at this city as though it were of another planet. The square and round towers, circular kivas and hundreds of passageways all built within the hollow of an immense cliff erased our century. Within minutes we stood before its beautifully regular slabs of sandstone cemented with red clay mortar. Juniper logs jutted out of the walls above us glaring in a southwestern sun.

We could readily see with our mind’s eye ancient ones carrying freshly gathered corn from above the cliffs down toe and hand hold-trails. We could see deer carcasses drying in the sun, and little children gathering turkey eggs from the turkey pens. The Anasazi made use of water seeps to irrigate corn, squash and melon crops on the mesa tops. They must have given thanks to the Great Spirit for something like the green-sharp-pointed yucca that provided banana-like fruit pods, fibrous roots for sandals and even soap. Domesticated turkeys not only provided eggs but also feathers for sleeping mats. White and red clays served the Anasazi women for the making of beautifully designed storage pots.

But Fear, constant fear of some unknown enemy lured in the back of their minds; otherwise, why would they have descended down into the cliffs to build fortress-like cliff dwellings? We descended to another Anasazi site called The Balcony House overlooking Soda Canyon. Once we got down to a lower ledge of Soda Canyon, Maura and I with other modern ones climbed a thirty-foot rope ladder and then crawled through a very narrow passage way into a little courtyard lined with a wall above three feet high above 700 feet of canyon space! We gingerly entered sandstone rooms in the back of the cliff, their roofs touching the ceiling of the cliff-cave. In the very back of the Balcony House, we entered a smoke house where meats of wild game had been smoked for centuries. Next to the smoke house lay an ice cold spring still trickling with water

As we left this fortress, we took note of three triangular designs carved into a wall. Perhaps they represented some sort of constant prayer to their Great Spirit for protection and security.But one other constant Fear was the worry about climate. Would it continually provide enough rain for their crops? If not, what would they do? Thanks to tree-ring analysis of ancient juniper trees that abound on the upper slopes, modern ones like us have determined that a severe drought did come to the Mesa Verde area in the late thirteenth century forcing the residents of all the cliff dwellings to leave.

Where have all the Anasazi gone? Apparently many left for Chaco Canyon, New Mexico only to again leave within several generations to Bandelier, New Mexico. Where are they now?? Their descendants are known as the Pueblo people who live today up and down the Rio Grande Valley of New Mexico. And yes, there are still underground kivas with sipapus. Many of you have heard of Santa Clara Pueblo made famous by Maria the Potter whose pottery today is highly valued and is in the collection of many museums.

That evening Maura and I attended a Navajo Yeibechei Dance performance in an open air, wooden-seated theater.. Their high pitched voices and jangling bells penetrated our beings and echoed back and forth from cliff to cliff. The primal essence of humanity can surely cross centuries of time like pinyon jays hopping from branch to branch. 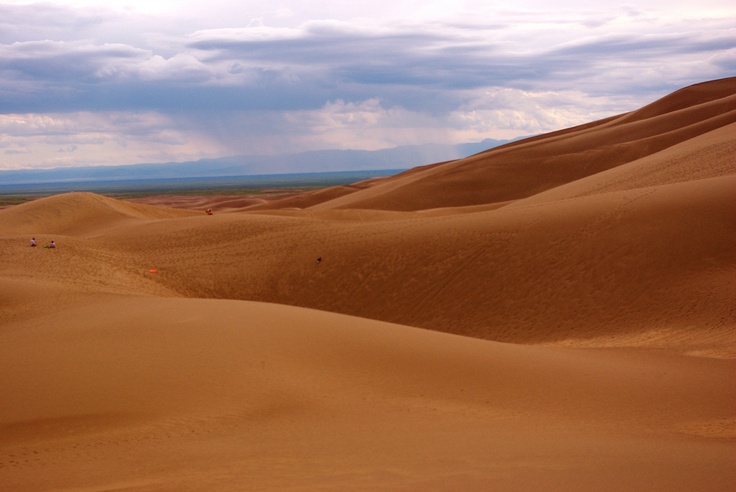 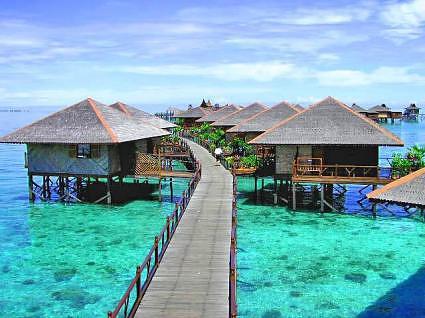