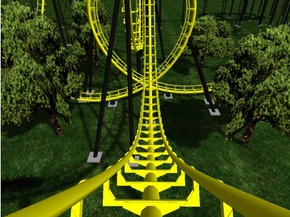 First of all,there is a supporting structure and the track system. It is generally made of steel, but there are also coasters made of wood, or steel structure and wood trucks combination.

Steel roller coaster provides a smooth ride with many evolutions and maneuvers a wooden coaster is not capable of, due to the inflexible nature of wood. On the other hand, wooden roller coaster’s ride is more rough, because of its unique construction. Wooden structures are designed to move under the force of passing cars. They can wobble from a couple of inches to a couple of feet, when the train goes by. The shaking and swaying motion is to absorb the impact of the train. If the wooden structures were made to stiff, they would break. Sometimes it seems like the construction isn’t sturdy enough, but it’s just an illusion. Some roller coasters can have a prefabricated wooden track, which is made in a factory, instead of on site. These coasters require less maintenance and provide a smoother ride than an original wooden ones.

A roller coaster looks like a train consisting of several cars connected to each other and is attached to tracks by double wheels. One set of wheels is on top of the track and the other one under the track. That prevents the cars from falling off. It does not have a motor or engine powering it, instead it is designed to operate based on physics laws of gravity and kinetic and potential energy. In a traditional roller coaster cars are pulled up to the first peak latched onto a chain that runs under the track. The chain is mounted at the top and bottom of the hill and it moves in a loop. Once the cars are at the top of the hill, the latches of the chain are released and the coaster moves on its own.

Newer roller coasters don’t use chains to pull them up. Instead they are launched by a motor mechanism. There are several kinds of motor launches: linear induction motor, flywheel launch, hydraulic launch, catapult, etc. They are all designed to give the coaster the highest speed, efficiency and precision. A well designed roller coaster should to be able to run through the entire cycle on a single launch using its energy and momentum.

After the ride, the coaster is stopped by a special break system. Breaks are part of the track instead of the train and usually they are positioned at the end of the track and sometimes also in the middle of the track for emergency stops. The breaks are in the form of fasteners that grab the train from underneath and gradually bring it to a full stop.

Before a roller coaster is opened to the public, it is tested for safety. Coasters have many safety features built into it. One of the main features is the restrain system. There are usually three kinds of restrains: a shoulder belt, a lap bar and a seat belt. All modern coasters are computerized. Computers, called programmable logic controllers (PLCs), run the roller coasters and also detect faults. It is very rare for an accident to happen.

No matter how big and scary a roller coaster can look, there are always enough thrill seekers to ride it. Many people say that it is more risky to drive to an amusement park, than to ride a coaster. 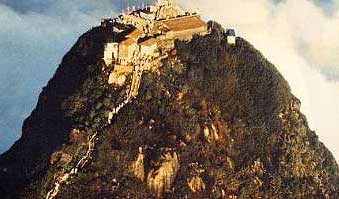 Adam’s peak is the highest mountain in Sri Lanka, located about 40 km Northeast of Rathnapura, the gem capital of Sri Lanka and 137 miles from...

Black Canyon of the Gunnison : A Place of...

Maura and I drove for two hours east of Grand Junction, Colorado through pinyon pine, juniper and sagebrush country ever upward to the rim. Suddenly... 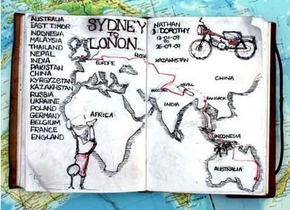