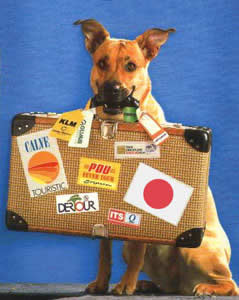 I went on an adventure almost seven years ago. It was an excursion to a new home in a new land to a new husband. The only “old” things we had were ourselves, a bit of furniture and his two cats. My dog traveled with me on the plane trip from Canada to the US, and what a trip that was!

It started out okay. I made the final decision to accept his proposal of marriage while visiting Las Vegas (we spent the time at Disneyland and then looked for an apartment). I returned home to Winnipeg, booked a one-way flight at the airport on my way back to my apartment and then frantically attempted to sell or give away all my possessions, except some boxed staples that various friends were willing to store for me. I also gave my two-week notice at my job and bid adieu to my friends and co-workers. Charities got lucky during my packing spree!

By the time that two weeks was done, my packing was exhausted and so was I! Leaving my cats in the care of one of my best friends, who also saw me off at the airport, I was US-bound, dog in tow! Well, dog in carrier, at least…

Getting to the airport wasn’t difficult. We even found a parking spot near the terminal. I walked the dog, went inside and got a baggage cart. My suitcase left to be inspected and I made my way through the people to my airline’s station. Let’s just say that this is where the fun began.

I put my dog Brandi’s carrier on the bottom of the baggage cart and my carry-on and jackets on the cart. After all, while it was fall in Winnipeg, it would be warmer in Vegas! It took all of three minutes to realize that in the soft carrier, Brandi was capable of “walking off the end” of the carrier and falling onto her nose. I heard a little ‘woof’ the first time. That meant I had to hold onto the strap of the carrier (still on the bottom of the cart), my carry-on and jackets while wheeling through the terminal. My purse was over my shoulder and tickets (and Brandi’s vet certificates, etc.) in the other hand. Where I got three hands, I will never know!

After two more ‘woofs,” we finally got into customs, my inspection area. I stood in line and waited. Thankfully, I was waved through. What I liked best (and still do) is the fact that mine was a relatively new airline. The crew that first met one at the airport stayed with you through boarding and on my flight. Thank you, West Jet! So, when I got to my gate, the crew remembered me boarding with a dog. The inspection officers were very kind too, by the way. One even chuckled when Brandi once more walked off the end of the baggage cart. Apparently, I was the only person that afternoon with a pet boarding with me.

After this excitement, we settled into a chair and waited to actually board the airplane. I opened the zipper of the carrier to make sure Brandi was still alert and functioning. She licked my hand and put her head on my lap (covered with jackets) to go to sleep. I checked my tickets once again and put my purse on the floor by my foot. There was no room on any other seats.

When my flight was called, I stuffed Brandi back in her carrier, gathered my jackets over my arm, picked up my carry-on and held my boarding pass in my hand, as I had been instructed.
Did I mention that this was only my second flight ever out of Canada and only the fourth time I had ever been on a plane?

I was halfway to the door when a fellow passenger came running up with my purse. I had left it half under my seat. I thanked him and proceeded onto the plane, carrier in hand, purse over shoulder, jackets falling on the floor twice (I do love friendly fellow passengers), and carry-on in my third hand. Thank goodness a nice fellow took pity on me and carried my jacket, sweater and carry-on onto the plane itself, stowing it for me in my compartment. Thank you, kind stranger!

The person sitting next to me offered to move to the aisle seat so I could put Brandi on the seat beside me. She loved dogs. Unfortunately, I had to keep Brandi under the seat, but I did appreciate the space! I discovered she was a wonderful world traveler, this pup of mine. She slept throughout the flight as crew and passengers kept walking by wanting to “see the doggie,” and make sure she was all right.

She just sleepily raised her head and “smiled” at them. They were charmed. I kept opening her carrier for brief moments to pat her, concerned with all her bonks on the nose. She was fine. She liked the rhythmic rumble of the flight while on the floor, under the seat in front of me. She only stirred once, after four hours, but then fell right back to sleep again. Pretty good for a 13-year old first-time traveler on a six-hour flight!

The journey back through US customs was more of the same. My fellow customers shouted out to me, wanting to make sure that Brandi was still ok. They bumped me to the front of the line, where a very nice animal inspector just looked at her documents, peeked at her in the case and said: “Let her through.” I got my suitcases and went to meet my future husband, all three hands functional once again.

Unfortunately, he had mixed up the terminals and was at the wrong one. I wandered throughout the airport until we finally connected. Let me tell you, at McCarran Airport you can do a lot of walking before you finally meet the person for whom you’re searching! Once we finally found each other, there was only 15 minutes left on the parking meter, so it was a mad dash with everything in hand to get to the car in time.

Mission accomplished! We survived! A few months later, my two cats arrived via Air Canada to complete our “blended family” with four cats and one dog.

Would I do it again? You bet! But not likely in this lifetime! 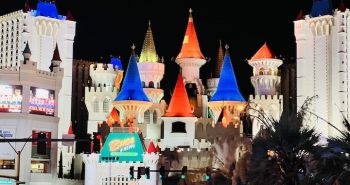