Harold Clayton Lloyd was born at 24 Pawnee Street on April 20, 1893, in Burchard, Nebraska, to Elizabeth and James “Foxy” Lloyd.

It was during his childhood that Lloyd acquired a passion for the theater experience. His mother read Shakespeare to him and encouraged him to assemble his own costumes and put together his own shows at home. At age eight, he acted in his first stage performance, a rendition of Macbeth.

Lloyd once said, “I was possessed from my earliest youth with a definite, violent desire to act that in no way conformed with the rest of my character.” 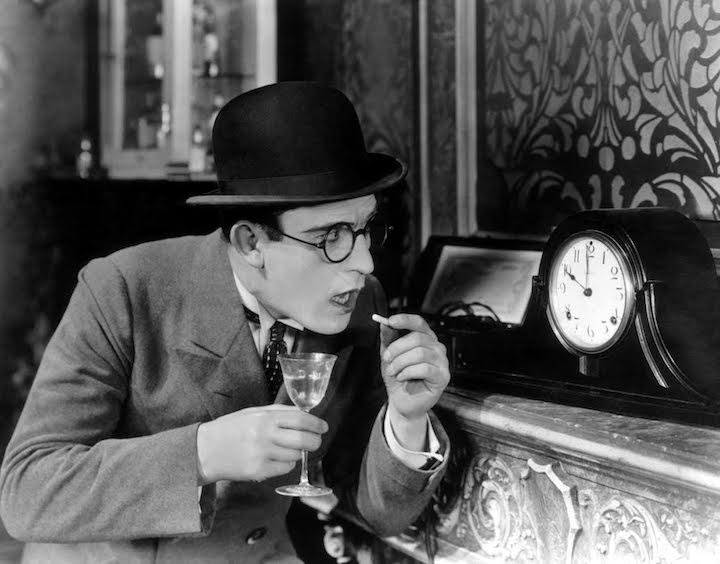 Harold Lloyd’s theater interest could have been short lived if not for a chance meeting, at the age of twelve, with John Lane Connor, the producer and leading actor of the Burwood Stock Company. Connor began boarding at the Lloyd house and, in return, Harold gained a mentor for his acting career.

After his parents divorced in 1910, Harold moved to San Diego with his father and enrolled as a senior at the San Diego School of Expression. Lloyd used his competitive energies as a boxer and debater, but was most interested in theater. During this time, his lifelong habit of constant activity was formed, including a nickname to match his lifestyle. In a vaudeville act he saw with his father, the featured boy, named Harold, whined to be called Speedy. “Speedy” became Harold Lloyd’s nickname as well as the title of his last silent picture in 1928. 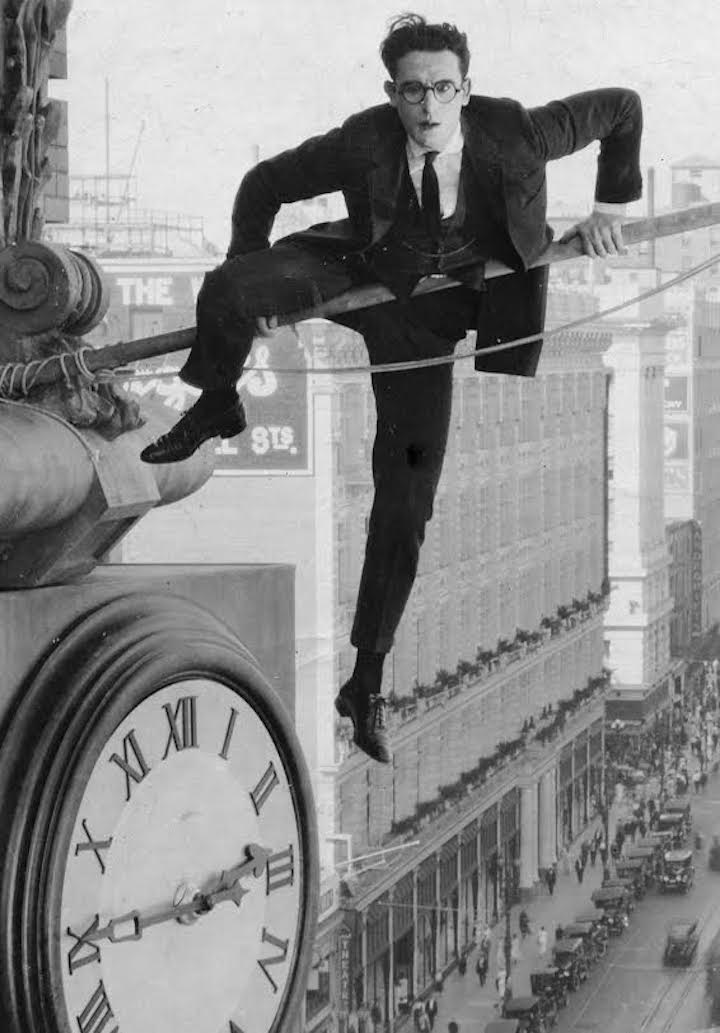 Harold Lloyd’s professional acting career began with drama rather than the vaudeville comedy, from which many other silent film stars emerged. Lloyd worked at Universal Studios as an extra for $5 per day and later as a comic actor for $3 per day with producer Hal Roach. It was while working with Roach that Lloyd created his tramp character, Willie Work. When only one of the “Willie” films, Just Nuts (1915), found its way to distribution, Harold Lloyd left Hal Roach to work with Mack Sennett’s production company for a few years, but returned to Roach and created the famous hayseed hobo (and Chaplin imitation), Lonesome Luke. The Harold Lloyd and Hal Roach team made more than 60 Lonesome Luke short films in two years.

After seeing a play that featured a fighting priest who wore horn-rimmed glasses, Lloyd experimented with the idea of wearing glasses himself. Soon, Lloyd had created a clean-cut Horatio Alger-type character with trademark horn-rimmed glasses and a straw hat. The new character made his debut in the film Over the Fence (1917). Lloyd found he could be anything he wanted with the glasses on. The meek, mild-mannered character would transform into a dynamo of energy and wild success.

Harold Lloyd gained fame as this all-American boy next door, “anxious to get ahead, not very good at anything, but willing to compensate with energy for his lack of talent.” This character found popularity leading audiences through an unending series of gags and comedic stunts. Despite irresistible odds, Lloyd’s character seemed to win in any situation. The “comedy of thrills” that continued from one movie to the next kept audiences coming back. Harold Lloyd’s most famous feature film, Safety Last (1923), is one of the best examples. In this movie, Lloyd first climbs 12 floors on the outside of a skyscraper dodging police, pigeons in his face, and a net that’s accidentally dropped from a store window. Painters scaffolding then tangles his legs, and the safety rope he grabs at isn’t tied to anything. In the film’s most famous scene, Lloyd grabs hold of the building’s clock as its minute hand slides down to six, and the face pops out, leaving him dangling 12 floors up.

“Neither he nor anyone else ever again achieved the rhythmic brilliance, the amazing, controlled crescendo of Safety Last,” wrote David Robinson, author of The Great Funnies.

In the midst of his success, Harold Lloyd’s dreams were momentarily shattered. On August 14, 1919, Lloyd lost the thumb and forefinger of his right hand when a stage prop “bomb” exploded. Although his face and eyes healed, his hand could not be repaired and the loss seemed a terrible burden for him. He obtained prosthetic devices for camera work and always wore gloves to hide the deformity.

Lloyd made almost 200 films between 1915 and 1919, most of which were comedies associated with thrills and climactic acrobatics. This is a staggering number compared with the 50 plus short films Chaplin made between 1913 and 1918. In fact, Lloyd made more films than Chaplin and Buster Keaton, a native of neighboring Piqua, Kansas, combined.

In 1922, Lloyd left Hal Roach’s film organization and created the Harold Lloyd Corporation, complete with a studio and the ability to continue making films. Lloyd made 10 films with this endeavor and another six films at the beginning of the sound era. 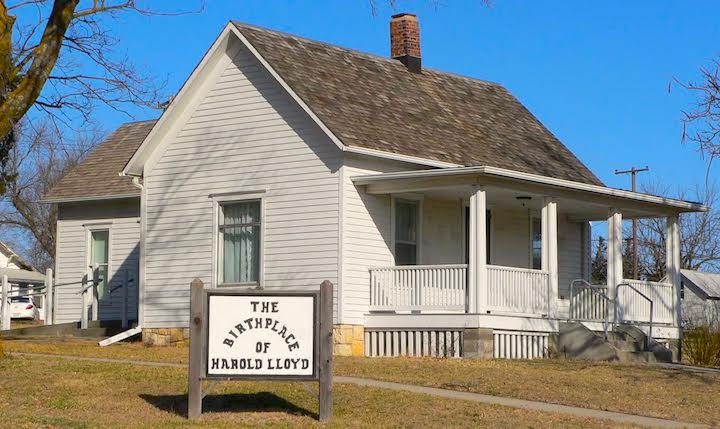 He married co-star Mildred Davis on February 10, 1923, in order to, according to Lloyd, “prevent her from leaving their film organization.” The marriage lasted until 1953.

In 1938, Lloyd left films to pursue his other interests. A great deal of his time was spent simply enjoying the family’s 16-acre estate, Greenacres, in Beverly Hills. The estate included a 44-room Italian Renaissance mansion with lush gardens, an Olympic-sized swimming pool, and a nine-hole golf course.

“Lloyd was a brilliantly successful comedian, and he retired gracefully from pictures to enjoy his family and the millions of dollars he had made…,” wrote Gerald Mast, author of The Comic Mind: Comedy and the Movies.

One of Lloyd’s greatest passions was 3-D photography (stereo photography). He was the first president of the Hollywood Stereoscopic Society and produced over 300,000 3-D photographs. After reviewing the many photographs, Suzanne Lloyd Hayes, Harold’s granddaughter, selected 67 of the photos to compile 3-D Hollywood: Photographs by Harold Lloyd.

In his later years, Lloyd was active in the Shriners and their charitable programs. Lloyd traveled widely for them as Imperial Potentate.

In 1991, after several locals heard that Harold Lloyd’s original home in Burchard, Nebraska, was going to be destroyed, they formed the Harold Lloyd Foundation of Burchard, with the goal to preserve and honor the memory of the legendary silent film star.

The Harold Lloyd Foundation restored his small, three-room birthplace home, which features memorabilia from Lloyd’s life. The home is open to the public. 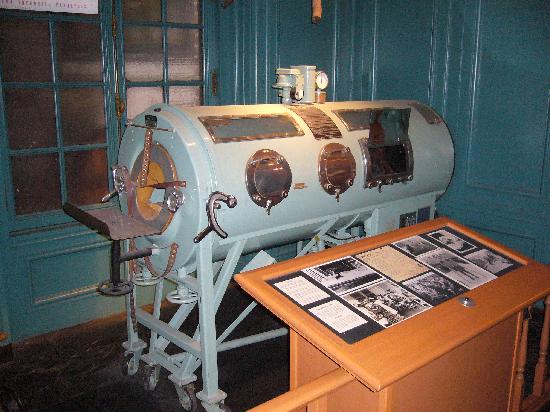 Chicago is world renowned for its incredibly diverse collection of museums. With over 40 to choose from, highlights range from dinosaur fossils to...

You’ve saved your pennies and booked your time off, but like other seasoned travellers to South East Asia, you fancy a Thailand holiday with a...