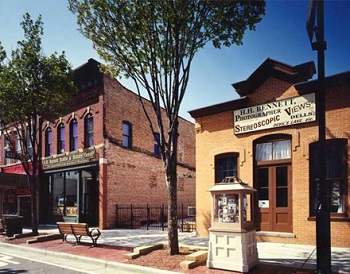 Centered in a somewhat chaotic labyrinth of the Wisconsin Dells’ tacky T-shirt shops, moccasin stands, merchandise, and the overblown upheaval of tourism, there is a gem of a site of particular interest to those with a bent for early photography and the stereoscope.

Henry Hamilton Bennett (1843-1908) opened his first studio in the Wisconsin Dells in 1865 (its oldest operating business), and he would become famous for his gorgeous, vivid photos of the Dells and the Native Americans of the Wisconsin River shot between 1865 and 1908. In 1875, Bennett moved into the self-designed Broadway surviving studio – thought to be the oldest operating photography studio in the United States. Bennett profited well from the business, utilizing it to sell postcards and souvenir portraits to vacationers, primarily Chicagoans. Bennett’s descendants continued to work the studio, modifying it in the years after his death. In 1999, when its new owners, the Wisconsin Historical Society, took over, the historic building was reconditioned to its 1908 appearance. 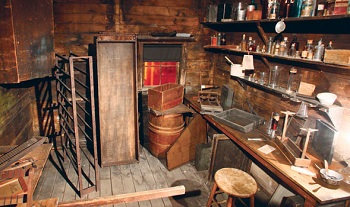 Noted for his advanced techniques, photography historians regard Bennett as one of the pioneering landscape photographers of the 19th century. Bennett was an initiator of early photography, discovering the stop action shutter, which allowed him to take photographs of on-the-spot events – the earliest samples of American photo journalism. Bennett’s dedicated his landscape work to creating stereo views and assembling his own equipment for producing stereo views and prints.

The resourceful inventor also built a spinning solar printing house to print his pictures (now at the Smithsonian Institution), and he was able to innovatively depict details of the sky and water by lacing together negatives from multiple photographs before fashioning a final print. By employing this method, Bennett weaved the loveliest of panoramas. Additionally, Bennett was commissioned by the Chicago, Milwaukee & St. Paul Railroad and took pictures in other states, including Chicago, Illinois’s epic World’s Columbian Exposition. Bennett sold postcards and photos from his studio and worked as a professional landscape photographer until his death in 1908. 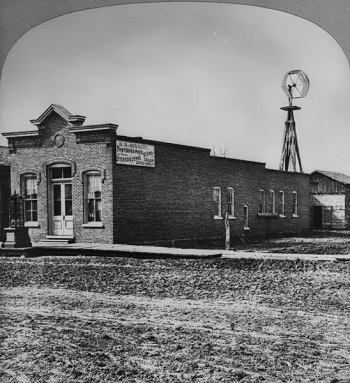 Today the studio still houses many of Bennett’s original photographs, cameras, equipment, glass plate negatives, and photography inventions. For better or worse, the Dells and their abundance of accompanying miniature golf courses, Roman coliseum-replica roller coaster rides, magic shows, laser-tag games, and populist buffets, are all part of but one facet of the popular contemporary American vacation experience.

Among the frenzied maze of activity and frivolity, however, is a true historical gem. Even in the most improbable of places, a story waits to be passed on, a life stands by to be described, and a history longs to be shared.

The ultimate once in a lifetime trekking experience! Set your sights high on climbing the world’s highest mountain for an iconic journey... 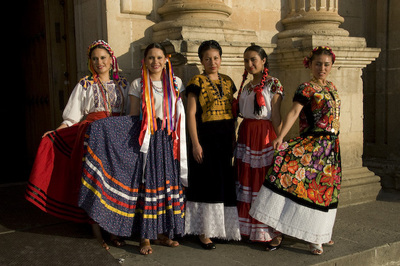 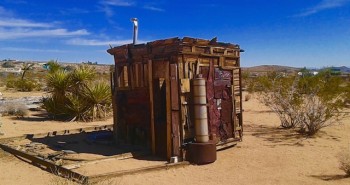 Who was Noah? Born in Alabama in 1917, Noah Purifoy graduated from the Los Angeles Art Institute in 1956 and spent most of his life in the city...