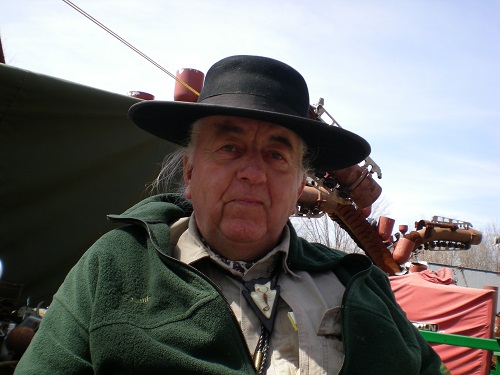 Commentary? Why bother? Is it part of a categorical genre or label?

No such classification exists.

Is it a time travel machine or a rigorously sane ecological statement? On a reasoned level, it is the stockpiling of all the shapes, forms and mechanisms of the industrial age, with parts gathered from all over the world. Capped by a copper-clad glass ball, the top section is a constructed space capsule.

Peer out into the sublime vastness of the solar system, imagine a tumble through the abyss of geological time, and one can not help but think, too, of how infinitesimal the moment of our own existence now appears. To the fantastical soul, how futile seems the span of an individual life. 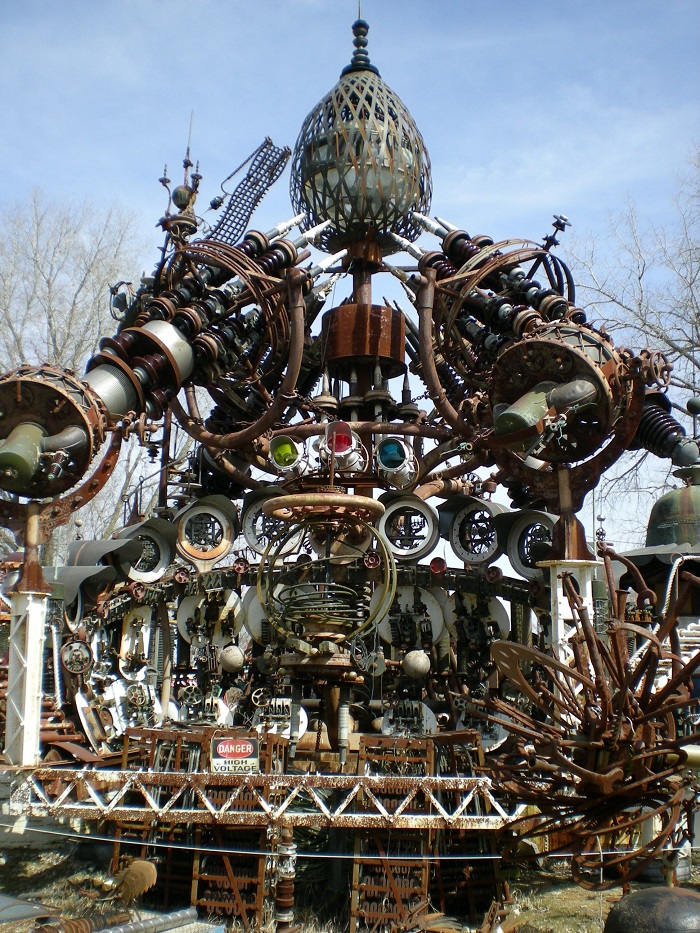 Beauty is indeed in the metaphysical. And there are plenty of both – marvelous beauty and freedom of interpretation – here at the largest scrap metal sculpture in the world. All you have to do is accept the scenic and historical integrity of the site, resist definition, let your thoughts synthesize, smile, and you will be just fine. After all, it is only a complex, futuristic assemblage to be used as a means to transport to the heavens that you are looking at. Nothing more, nothing less.

“Instead of imposing your interpretation, it’s best to leave it alone,” says Tom Every, aka Dr. Evermore, the progenitor of this artistic innovation. “I don’t impose my interpretation here, but I let others find their own interpretations. People that are stymied come here and pick up the brushes of energy. It’s a place to get the imagination and inspiration going, and what more can you really do for people than that?”

This is the good doctor’s world at Forevertron, a fascinating salvage of bits and pieces of machineries, bridging the industrial revolution to today’s computer-driven, de-industrialized dimensions; between fifty to one hundred years old, parts stand welded and bolted together for stability. Historical components include a pair of bipolar electrical dynamos constructed by Thomas Edison, in the late nineteenth century, and a decontamination chamber from the Apollo Space Mission.

The Thought Patterns Of Nikola Tesla 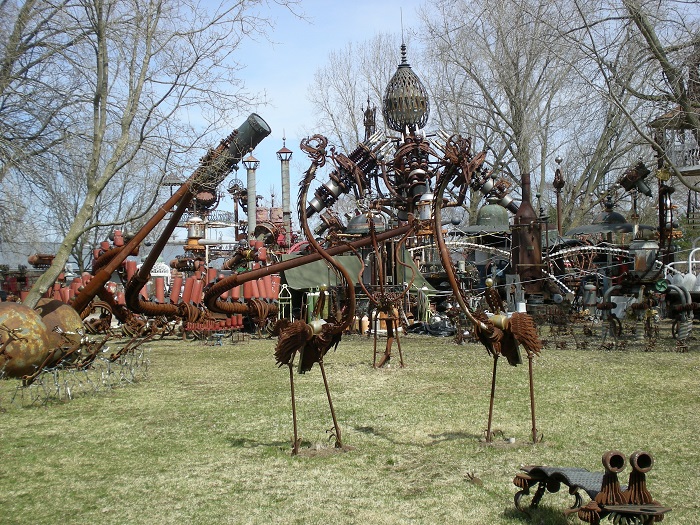 “These Edison bipolar dynamos have Tesla’s thought patterns on it, constructed around 1882. They came from the Ford Museum. With all designing and engineering, people stand on others’ shoulders to progress things.” – Tom Every

In a world seemingly without very much order, priority or focus, it is surprising perhaps that Every can recall the true origins and exact functions of each piece of metal. He knows each bearing, grinder, shifter, cannibalized car, rusty winch, and block of iron. He claims there is a story behind each, a tale of hauling, a memory of turbulence, and a remembrance of what was. It seems that the eschatologist in Every revels in the doctrines concerning the final matters of steel, industry, and, ultimately, human existence and fate.

“You can’t reverse our impact or what we made things for,” says Every. “I don’t believe junking iron and steel. I am for showing what the consequence of humans on the planet has been, not expunging it. I see trouble in what we are building nowadays. Because there is no real integrity, just short-term patterns. I did three hundred and fifty major wrecking jobs, and I sure can tell the difference in construction materials used then and now.”

The Gravitron, which took three years to put together, consists predominately of circular metal components: wrought iron, copper, brass and stainless steel are the most evident. Its principal central section is a kinetic bank of generators, thrusters and other electromagnetic power sources. It is a monumental sculpture, weighing roughly three hundred tons and standing one-hundred twenty feet wide, sixty feet deep, fifty feet high. Every sees it as a sort of gateway between worlds. If all goes accordingly, the Gravitron force will somehow leave the earth, connect with outer space, and return to re-connect with him on the earth – all in preparation of an afterlife. The ‘Celestial Listening Ear’ should permit him to broadcast extraterrestrial observations to those on earth.

“All the elements and thoughts patterns of electricity and time travel are involved here,” says Every. “There is a reality, progression, and integrity of touching electricity and time, and this is the product of that. I am most into energy flowing, and I have nothing but respect for it.”

Dispersed in proximity to the Forevertron are fanciful pieces that reveal themselves perfectly suited to the good-bye bonanza of Dr. Evermore’s separation from earth. The most lovable group of peripheral figures is the Bird Band, a coterie of figures pieced together from brass bedposts, old tools and other hardware, pipe fittings, bike brakes, survey markers, gasoline nozzles, facsimile laser guns, and a full complement of working musical instruments. One is comprised of Haitian steel drums and another has chimes that form an old church hanging on its back. Just where it is that the doctor will end up once he has blasted off is anyone’s guess, but at least some facts exist as to where and how this man came to be. 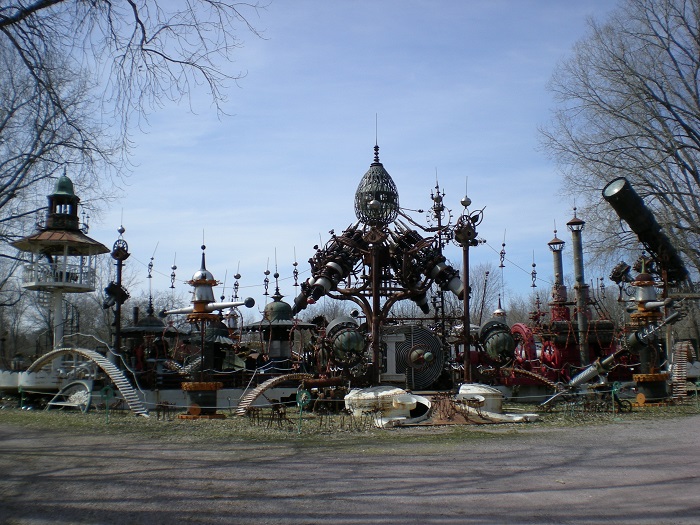 Of Cockney descent, Every appears intimidating, but in actuality he is a friendly eccentric who could chat for hours about his work – and energy force. Born in 1938, country kid Tom O. Every was enthralled by scrap, steel and junk. Traveling by bicycle through the quiet streets of Brooklyn, Wisconsin, he sought out unusual objects to turn into useful gadgetry. This childhood fascination with such materials led to a career in industrial wreckage.

As a salvage man, Every traveled to factories and industrial sites and dismantled obsolete machinery. He soon shifted from wrecker of shambles to preserver of clutter, hoarding odd shapes and forms that he felt would soon somehow disappear from the landscape, such as tank ends with interesting rivets, or brewery furnaces.

Every sorted and saved as many unusual components as space and energy allowed, by his account about a thousand tons. He renounced his former ideas and business plans, becoming reborn as Dr. Evermore, and through this new identity, he built Forevertron.

“I had to become Dr. Evermore back in 1983,” says Every. “I was bothered by all that I saw in the world; I wanted to perpetuate myself back into the heavens on this magnetic lightning force field.”

The mission of Forevertron and its kinetic sculpture is restless exploration. Ultimately, pushed against this steely reserve of earthly time and its transience, Every, 75, like many of us, dreams of posterity. His passion for art is fresh and innocuous. He does not hunger for fame or utility, but hopes for a lasting monument, and, in the interim, a secure place on earth to illustrate his energies; to muse over the question of extinction and the march of time, and man’s place in the universe. And well, just to live like a young boy enthralled by metal.

“This is the place for playing around and to have fun without the bullshit of life interfering,” Every smiles. “It’s like a disease here because all I see are positive things. I have a set amount of time here to do the best that I can, and I am happy with each new load of stuff I can use.”

Choice Chitchat: Tom Every’s sculpture garden is located on Highway 12, five miles south of Baraboo, Wisconsin. No admission fee is charged. On most days from late spring to late fall, you may find Dr. Evermore in the center of Forevertron, reading, writing, drawing, or just thinking–hours vary. The garden sits behind Delaney’s Salvage, the perfect compliment for artistic eccentricity.

Clarke Quay is well known as the party district of Singapore, where the city’s locals and expatriates alike come to let lose and explore the... 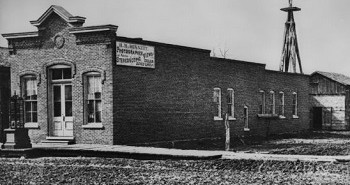