Folk Art of the Desert – Part I – Salvation Mountain 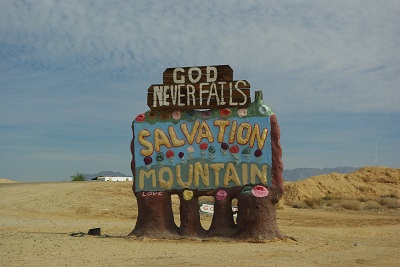 To me, folk art by locals is a broad term that describes the artists’ impressions of the area. I realize that’s probably not the refined words used in the art world, but it’s how I’d interpret the first four types of folk art I saw in Coachella Valley.

Art is a very difficult subject for me to talk about much less write about. For most people, art is subjective and personal, as is beauty is in the eyes of the beholder. Therefore, I’ve written this article from my perspective only, without any intent to judge, hurt or even inspire others; it’s just thoughts of one woman, who has no artistic talent whatsoever, on what she saw and felt while visiting these exhibits.

My husband and I chose to break up the four exhibits into two different days. It was pure coincidence that each of the two days first started with a tribute to God and Christianity, followed by exhibitions that focused more on the times and issues of society. Fortunately, I was able to look past any symbolism of any kind and regard each piece for what it was: art. My favorite part of seeing art is trying to feel the piece, actually looking back in time and imagining the artist working on it. I want to understand what they were feeling, what was going on in their mind at the time, and what message they’re attempting to convey.

The Guy behind Salvation Mountain: 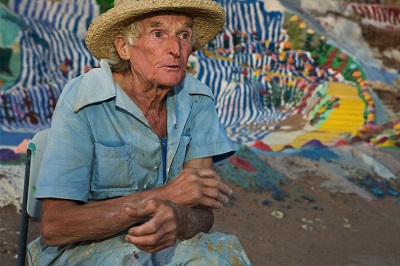 Leonard Knight, born in Burlington, Vermont (Nov 1, 1913), is the man behind this imposing art work. In 1967, he was in San Diego visiting his sister Irene, who was a Jesus fanatic and loved Jesus in a way that angered Leonard. As an escape one day, he went to his van and sat there, and for some strange reason he started repeating the sinner’s prayer: “Jesus, I am a sinner, come upon my body and into my heart, please.” At 35, he accepted Jesus into his life.

With Jesus in his heart, the enthusiastic and invigorated Leonard returned to Vermont with his new found love and began attending church after church, searching for the truth of this widely misunderstood Jesus Christ and the Holy Ghost. Later, Leonard went to churches to share his own version of Jesus: “Accept Jesus into your heart, repent your sins and be saved.” This didn’t fly well among church leaders, who insisted that it was more complicated than that. Leonard had to battle against the resistance of everyone, and he had sadly failed to pass on his simple idea of Jesus.

Upon seeing a hot air balloon overhead one day in Burlington, it dawned on him that that might be a better way to deliver his message to the people. However, he couldn’t find one for the next 10 years, and, in the end, he decided that the best way to have a hot air balloon was to make one himself.

On Leonard’s way out West, his van broke down in Nebraska, and he stayed with a friend who provided him with a sewing machine. He sewed relentlessly for years to make his hot air balloon. He found all the odd jobs possible and imaginable, in order to raise money for it. Leonard became a wonderful patch-maker and when he was finished, he wrote in red the sinner’s prayer on it: “God is Love.” The balloon didn’t last long, and his countless attempts to fix it proved to be more difficult. Ultimately, he gave up.

One day in 1984, Leonard and his boss, who owned a service for changing big-rig tires, traveled to Niland and Slab City near Palm Springs. Leonard really liked the area, and he later returned with his van and his hot air balloon. He tried and tried to inflate it, but he failed with each attempt. He sought out local help as well, yet he accepted defeat and was crestfallen from his tireless pursuit to illustrate his undying love for Jesus for 14 years of his life.

Leonard ended up staying in Slab City, “the last free place on Earth,” and began to create a monument to Jesus on abandoned government land, designing what would become the first Salvation Mountain. As it grew higher, he used junk he had found by the roadside and added sand and cement to make it bigger. However, it didn’t take long for the whole monument to fall apart. Instead of being discouraged, he thanked God for showing him that the Mountain wasn’t safe in the way he had built it, and he vowed to Jesus that he would reconstruct it in a more secure manner. 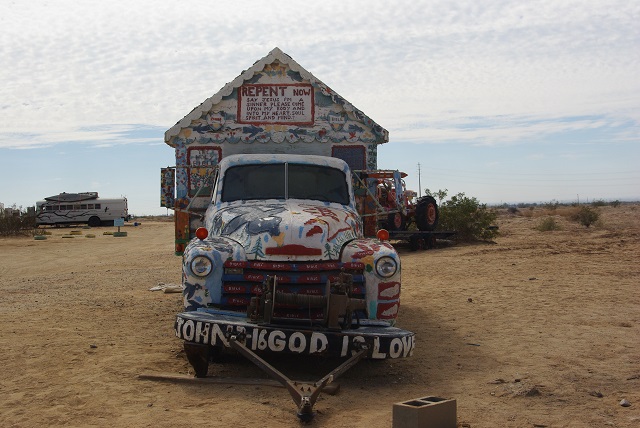 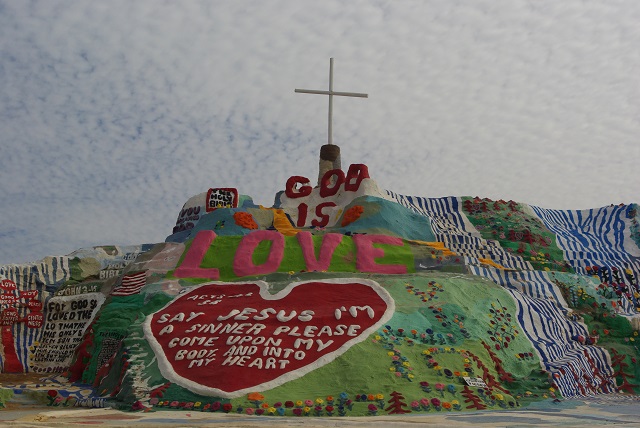 After some experimenting over the next several years, he rebuilt the Mountain using clay and straw. He continued to add layers of paint to keep it stronger, which also helped to avoid erosion from the wind and rain. Thousands of people flocked to visit and provided him with free cans of paint. It’s estimated that he may have used over 100,000 gallons to cover his Salvation Mountain Part II, which is the one you can admire today. Leonard spent nearly 27 years building Salvation Mountain one and two, living off of donations by the thousands of admirers he had acquired over time. People came from all over the world to meet Leonard and visit his creation. Since he was living there full-time, he often gave tours to visitors. 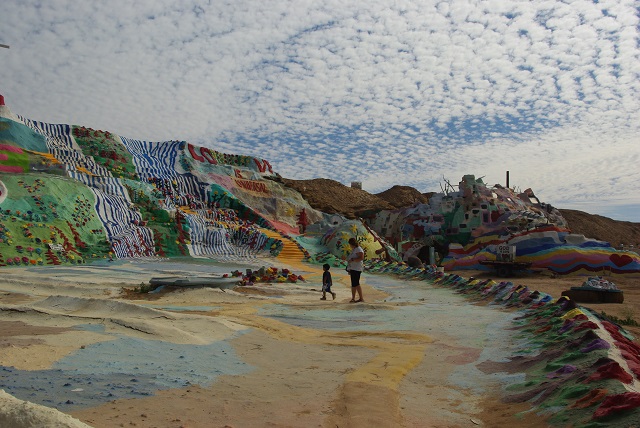 The government tried to tear down the Mountain, but the community of Slab City and his supporters banded together not only to save his work, but to make it part of American folk art history. Leonard died just a couple of years ago without ever fully completing his monument. A group of artists moved to the actual site and are attempting to continue his work with the help of charity, in order to maintain the Mountain in the rough conditions of the Colorado Desert.

My husband loves to get an early start, and, of course, we arrive there before any other visitors. When we first got out of our car, we were hit with the smell of a campfire (the on-site artists must have been making breakfast). I took in a deep breath, bringing back fond memories of camping as a child. I knew at that moment that this visit would be wonderful. The air was still crisp from the night, but with each passing moment we could feel the Colorado Desert was heating up, creating a sort of magic in the air and an awe of the area in which we were. 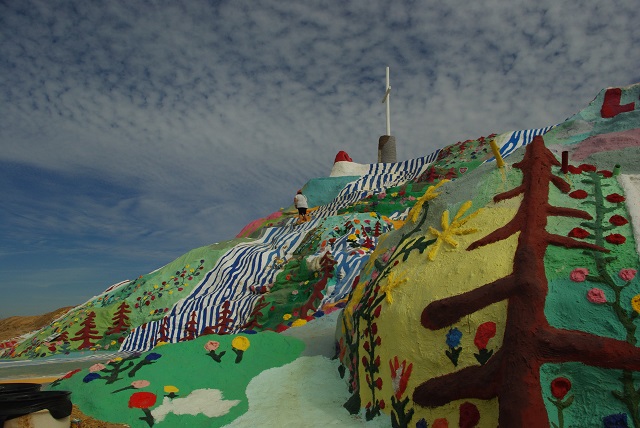 Me climbing to the top of Salvation Mountain

We walked closer to the Mountain, and at first it looked as if it were something a child would do. However, as we get closer, we begin to realize that a story is being told, in rivers, flowers, hills and words–this is no mistake. The artist behind this work had a message and a purpose for everything he did here. While we were in the “cave” portion, we got an idea of how detailed the work is: trees, car parts, windows, balls of hay and most anything else one could imagine was bound together as a base. As we traveled deeper inside, we felt as if we were beginning to understand Leonard and his passion for what he was doing. It made me a little sad not to have had the chance to meet him. I was happy we were the only ones there at that early morning hour, for it allowed us to quietly absorb this place in peace. By the time we left the “cave,” people were starting to arrive, and the quietness we had relished was now gone. 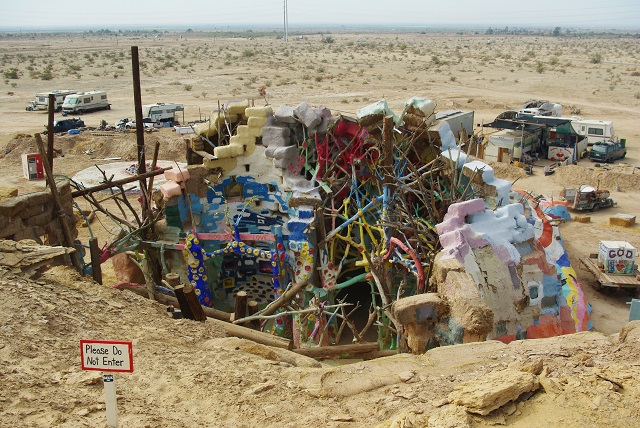 View from the top

It was then the opportune moment to climb the Mountain, which is no easy ascent. It’s not due to its height, but because it wasn’t really made for it. The paint is slick, the path is uneven and we could feel how soft it actually was under our feet. Once at the top, though, we truly appreciated the area and land that Leonard had chosen to work and live for 27 years. It’s harsh, dry, lonely and unforgiving, and there’s only sand as far as the eye could see. I instantly felt that if I were forced to live out here for any length of time, I would probably lose my mind. At that moment, I realized I needed to move on, and that I was taking this whole project too much to heart. We walked down a different side rather than risk slipping on the paint. 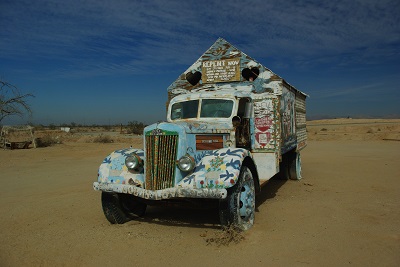 Truck where Leonard used to live

At the bottom we spotted two old trucks which Leonard had lived in while he was here. Each has been left just as it was, with a modest bed (still made) and a Bible—nothing more. It was obvious that Leonard was a simple man who lived a simple life, with the intent on getting his message out. I stepped back and took in everything all at once: the Mountain, the cave, the painted trucks, the Bible verses, and I began to see it wasn’t as simple as I had initially perceived it to be—it was thoroughly complex. I did not get the impression that Leonard wanted to convert anyone, but instead he wanted to show others his faith and share his love of his spirituality with anyone who cared. Though I’m not a Christian, I do have a spiritual side, and anyone who dedicates his/her life to showing their faith in such a loving and peaceful way deserves respect.

A small video we captured during our visit: 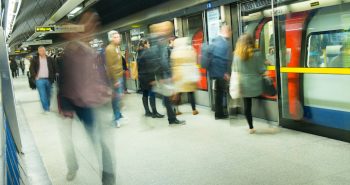 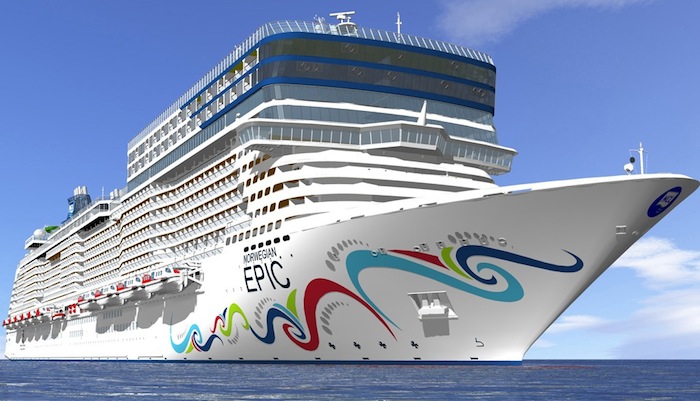 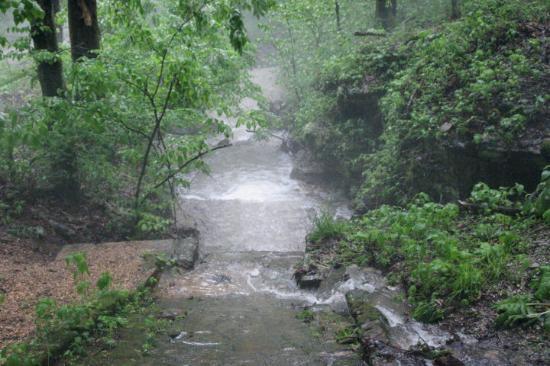 The best vacation destinations in Kentucky

Kentucky offers a truly one of a kind vacation experience, with all the romance, history and charm to be found south of the Mason-Dixon Line. To...