Exploring Magritte on One Corner of Brussels 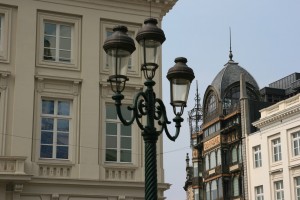 You are on your way to 1, Place Royale, sometime between 10am and 5pm (Tuesday through Sunday). From Wallonie, drive north on the N411. But if you are coming from the airport, take the ring to the N411.

Les Musées Royaux des Beaux Arts has expanded itself as of June 2009 to include Le Musée Magritte. While the word surrealism is now overused and underestimated, this collection is a celebration of one of the most known and appreciated surrealists. Each hall pulls the visitor into understanding Magritte’s journey. The trip is accompanied by his friends, into scenes and across words which are so uniquely his.

Throughout Magritte’s work, from his futuristic to his surrealist to his “vache” and finally back to his surrealist periods, the artist’s friends and family, notably his wife Georgette, appear. As spectators, we may see only one side of them, and that could be covered with a cloth, but the whole image is there (The Lovers, 1928).

Speaking of friends, or rather the continuous banishment of friends, no one can experience surrealism without a mention of Andre Breton. He was the man with the power to say who was “in” or not. Magritte was an official surrealist “friend” for years despite the fact that Georgette wore a necklace with a cross – the one symbol for which Breton had no tolerance.
So, when finally (as it happened to almost every surrealist at one time or another by choice or obligation) Magritte disassociated himself from Breton, he entered his “Periode Vache”. The literal translation is “cow period”. It was (and some would say, thankfully) short-lived. He did not swap his perfect contours, phantoms, leafed birds, etc. for cow pastures. In french, something “vache” is nasty. He named it himself and was symbolically sticking his tongue out at Breton. Shortly after their rupture, he had his first Paris exhibit, in 1948. These hastily painted scenes and people were not what the Parisians expected of Magritte as a surrealist. That was the point.

He even took this collection to New York City where the Hugo Gallery exhibited it. There, he met his future agent, Alexandre Lolas. The “vache” was not very well-received, but he had brought along some of his earlier work. The New York City art scene was already familiar with Magritte from his first American exhibit in 1936 at the Julien Levy Gallery. Lolas encouraged Magritte to go back to his tried and true style. Reluctantly, he did. But, he did avoid being predictable. He was not going to paint a tree because he wanted the public to see a tree. The image was to come from behind our eyes. Why paint a full tree with a detailed trunk and green leaves when the word “tree” suffices to evoke just that. He painted words on his canvas just where they were to be visualized. So, what is being represented? What is the representation of such an object? Both of these questions help us understand also exactly why a painting of a pipe is absolutely not a pipe. The audio guide of the Musée Magritte will play for you his personal explanation, “Can you light the [painting] of a pipe? No, therefore it is not a pipe. If I had written underneath [the image] this is a pipe, I would be lying.”

In fact, the best manner in which to enter a Magritte exhibit is to not ask too many questions, but to listen and watch what first comes to mind. The audio guide also helps. The artist once admitted that there were no hidden meanings in his paintings. He simply wanted to see certain beings or objects in particular forms or positions in relationship with the work of art as a whole.

Not surprisingly, Magritte had never appreciated the routine or obligated habits of anything in everyday life. Nevertheless, he had started his career in advertising. Those promotional posters for products and events paid the bills. And, in the end, L’oiseau de ciel (1966) did become the well-recognized logo of Belgian’s national airline, Sabena. Still, his attitude justifies why the sky looks like it is flying through the bird instead of a bird flying through the sky. Also on that note, why does a mermaid have rather the head of a fish and the legs of a woman? Why is an apple as large as a room (or a room as small as an apple)? Most people live and react like everyone else, that is reality. For a change, step into surreality. Hold you glass high to the giraffe standing in a champagne flute. Cheers to the cloud in the wine glass. Hats off to the man facing the mirror only to see the back of his head.

During your visit through the Musée Magritte, let the collection seep inside you. Maybe black-suited men do not rain from the sky, but if thinking of that image affects you in any way or not, so be it. Go ahead, open that old wardrobe and find a set of perfect breasts perking through a well-ironed (surreal enough already) night-dress. Go back for another look, to each room, to each quote, to each style and genre Magritte explored. This is not the end of his influence.

* To actually see, among many other souvenirs, the chimney from which an apparent train approached, visit Magritte’s house at Rue Esseghem, 135 Brussels. This René Magritte Museum is open Wednesday to Sunday 10am to 6pm. “Safari: A journey or trip: a sightseeing safari” We were six: more or less retired, too bored to sit and watch the paint dry. So we... 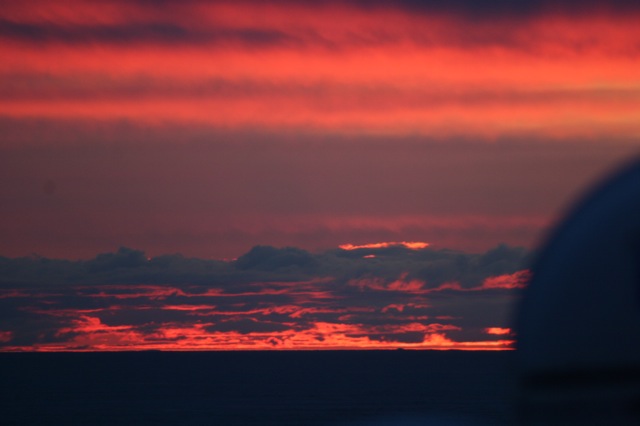 By Mary Ann McGivern  June 1 to 4 We were on the Alaska Marine Highway ferry for three nights and four days. It was a splendid experience. The...