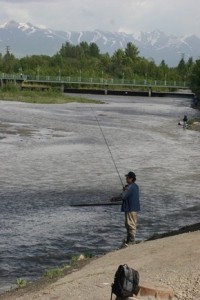 fishing on Ship Creek in Anchorage

From Talkeetna we drove to Anchorage where we spent our last few days. We stayed at Dave’s, sleeping indoors for the first time in weeks. We used the electric pot to make coffee.

We ate out at the Moose’s Tooth, a microbrewery, and the Beartooth Theatre Pub and Grill where we saw a movie. They are named for two peaks near Anchorage and the photo is in Beartooth. As I say, toothy mountains. We drove across a glacier to Girdwood. We hiked up Table Mountain for a great view of Anchorage – and we were still in the city limits.

The newspaper had accounts of the four McKinley climbers who fell to their deaths and a hiker in Anchorage who was clawed and treed by a brown bear. We had just been there.

Dave had a party to introduce us to his friends who were all very glad we did not raft the Copper River. We visited Alaska Pacific University where he teaches and Alaska Alpine Adventures to praise them for their food.

We went downtown to Ship Creek to watch urban salmon fishing. Again we read the State Parks interpretive signage. We bought clothes at Nordstrom’s for Paulette to wear at a wedding. We said Nordstrom’s must have missed Julie. We also went to three museums. They were fantastic.

First we went to the Alaska Native Heritage Center. It has displays but the emphasis is on experience. We saw native dances and a display of native games, honed in small huts during the long winter darkness and now played in the Arctic Winter Games and Native Youth Olympics.

Outside there was a ring of huts representing tribal homes and inside were speakers, totem poles, caribou hides, cooking equipment, escape tunnels. The native speaker described how a polar bear cub once got caught in an escape tunnel and his father climbed up to the house roof to shove the cub back outside.

Another man in another hut told how he was chosen as a boy to be a whaler because he could throw a stick into a rolling coffee can. But on the whaling boat, his job was to take a small bag of powder and when the whale surfaced next to the boat to leap over the side and put his hand into the blowhole, going down with the whale. When the whale surface, he had to pull his hand out of the blowhole and let go, so the boat could pick him up. If the whale took him down a second time, he would be too far away for rescue. Meanwhile, the whale would choke on the bag of powder and drown, to be harvested by the whalers.

This is a great city museum. Sidney Lawrence is the great Mount McKinley painter and he has a room of his own, right next to a dozen other painters, some representational and some abstract. Lawrence is painterly, worth looking at for a while – especially since we never saw McKinley in Denali for from Talkeetna or Anchorage.

There’s a wonderful series of dioramas of native life. I sat down in the children’s science museum to watch a video of the Anchorage earthquake of 1964. And then I watched a video of an Alaska Native Corporation making investment and land use decisions. Alaska now has corporations, not tribes, and the video demonstrated some of how the system works. I also saw a great exhibit of Denali climbers and a history of the equipment they have used.

Finally we went to a hospital to see art. Here’s the story. Probably it was back in the 1950s that the Medical Center telephone operator in the old hospital began keeping a drawer full of small artifacts to sell. She used the money to help the men and women who accompanied patients but had no bus fare home or money for meals.

Gradually the collection in the drawer grew bigger as grateful return patients and families brought more items to sell. It because little counter display, then it filled a brook closet, and then, in 1975, when the telephone operator retired, three volunteers worked a sales table in the hospital lobby. After a year, they were given a room in the hospital for a permanent craft shop.

In 1996, before the new hospital opened, a request was sent out to native villages to contribute artifacts for sale and for display. The response was overwhelming and the architects made more display space in a structure that echoes native design.

Take the elevator up to the fifth floor and walk down. Then go to the crafts shop. Bring your checkbook.

On June 20, at 12:15 AM, the day of the solstice celebrations, we flew out of Anchorage, heading home. The sun was still shining. 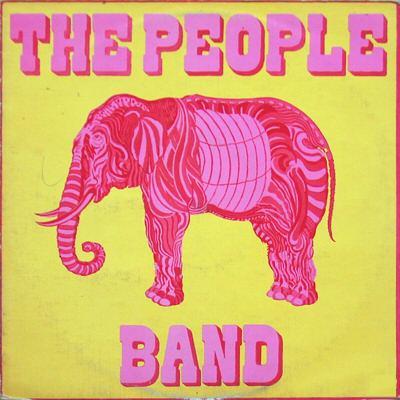 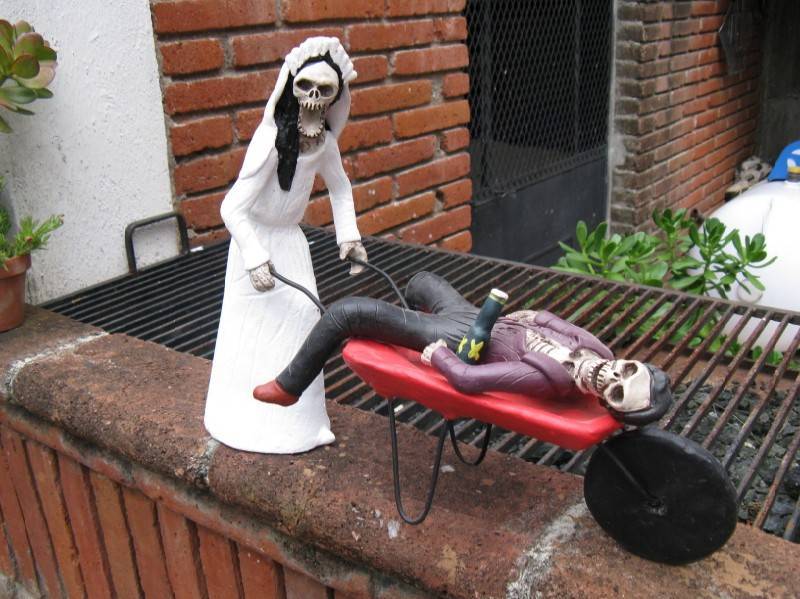