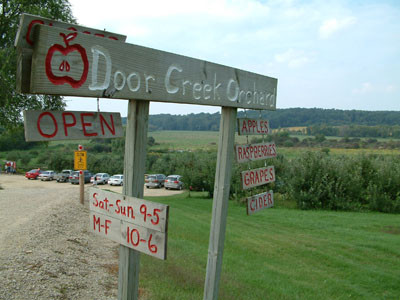 Door Creek Orchard is a fabulous apple farm in Cottage Grove, WI. Here, nature is a sacred paradigm of harmony, and in such environs human beings come to taste a bit of its bounty: dozens of varieties of apples, some raspberries, and bunches of concord and wine grapes. Just minutes from downtown Madison, the orchard is the perfect place to reacquaint with the outdoor world.

Door Creek Orchard brings visitors closer to the benevolence of the Leopoldian ethic of land and engenders strong appreciation of the beauty, bounty, and diversity of southern Wisconsin’s countryside. More than only apples, the orchard is the poet’s plea for what once was, yet could be again: a simple life in which a person has both the time and inclination to ponder old verities, attempt to fathom his universe and himself, expand his imagination, and exert his energy.

For the past 30 years, from August through late October, Tom and Gretchen Griffith have welcomed folks to share the autumn harvest at Door Creek Orchard, which spreads across what was once an early 19th-century Norwegian-American dairy, tobacco, and hog farm. Tom and Gretchen live on the property, in an 1860 farmhouse, which has sheltered their family since 1985, the year the orchard opened. Lush wetlands, rolling fields, and colorful, open woodlands envelop the land. Preying turkey vultures, flocks of blackbirds, cranes, and the occasional bald eagle soar above, painting a nuanced portrait of a singular natural character. Some mornings a white turkey roams the rows of its diverse, neatly planted apple trees.

In addition to the pleasant fall fruit and cider for sale in the shed, Door Creek Orchard provides customers with a quiet place to pick nature’s bounty, a true harvest experience that offers an escape from the pressure of fast-paced urban life. Indeed, the orchard is the result of Tom and Gretchen’s magical and sympathetic coordinations of nature, and though less than a few miles from the swelling peripherals of Madison, and a little over one hour from the urban edginess of Milwaukee, most visitors sense a resurgent aliveness and a refreshed closeness to the soil. 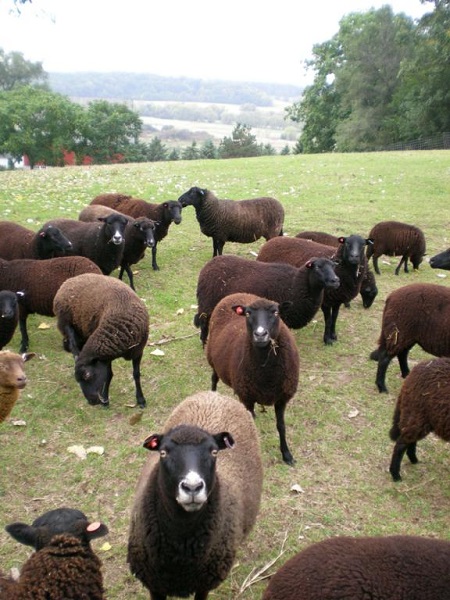 In an era in which corporate identity is trampling local identity, Door Creek Orchard’s agricultural philosophy thrives in a garden rooted in bedrocks of sustainable parochial farming. Mindful of minimizing the orchard’s environmental impact and committed to a minimum amount of spray, they produce quality, healthful crops while embedding strong protective safeguards. The owners of Door Creek Orchard understand that their produce affects not just the environment but also the community as a whole. Each October morning, Tom Griffith, 62, a seemingly indefatigable man, wakes up with the sun to tend to the orchard’s daily needs. Teeming with life, intelligent, and literary, as well as a competent conversationalist, he has an encyclopedic knowledge of apples. Indeed, both Tom and Gretchen Griffith face down each new morning with the exuberance of contented beavers with more dams to build.

At the upper orchard, American Black Welsh Mountain Sheep graze, frolic, and grovel for apples. This rare, versatile breed provides tasty, mild mutton and a dense, durable fleece. The global population of Black Welsh Mountain sheep is approximately 10,000, with the largest populations found in England, Scotland, Wales, and Ireland, as well as approximately 800 North American animals in over 50 flocks in the U.S. and Canada. Mature ewes average 100 pounds; mature rams can range from 132 to 143 pounds. No limits exist as to breed height, though most purebred animals are relatively squat, typically measuring between 20 to 30 inches at the shoulders. The ewes are polled and the, well, rambunctious rams have awesome sets of horns. Lambs are quick to their feet and vigorous.

For more than two decades, fall to the Griffiths has meant sharing Door Creek Orchard, 3252 Cottage Grove Road, and offering their land and crops to the community; in the process, they have galvanized the latter’s regard and esteem of the land they love and labor. For hours, picking information, or directions: 608-838-4762.