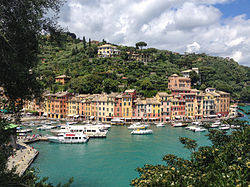 Portofino is one of the prettiest fishing villages on the Italian Riviera.

It is also where dolphins, the fastest, most agile and playful of whales once gathered in large groups. According to Pliny the elder, Portofino was originally called Portus Delphini because of the dolphins.

The Riviera is a narrow coastal strip between the Alps and the Mediterranean Sea. It extends from Hyeres in France to La Spezia in Italy. Genoa is the center of the Italian Riviera and divides it into the Riviera di Levante (east) and the Riviera di Ponente (west). A panoramic highway runs along the Riviera from end to end. It is known as the Corniche. A drive along the Corniche road reveals the luxuriant vegetation for which the entire area is known. One can also glimpse villas set in beautiful gardens and catch sight of world-famous resorts that developed during the 19th century because of the region’s mild climate.

Although Portofino is one of the most memorable ports of call on a Mediterranean cruise, time has, unfortunately, not passed it by. But to visit the port is to journey into the past… following in the footsteps of Dickens, Gide and Guy de Maupassant, even though the harbor now overflows with gaily festooned high-tech yachts from all over the world. 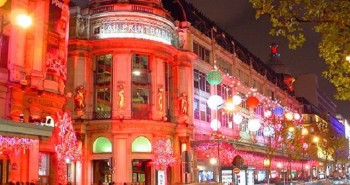 Going to Paris? Here’s What You Can Do...

Paris is the most visited city in the world and attracts travelers from different walks of life. It’s also notorious for being one of the most... 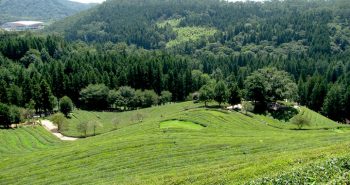