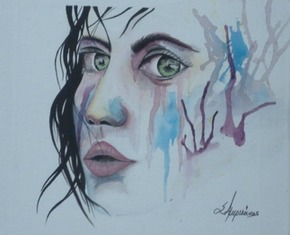 There is no doubt that Greece is suffering under the austerity measures brought about by the debt crisis. However, artists still struggle to display their works, although they have little realistic hope that their works will sell. This was the backdrop to the fifth exhibition of Technosfaira (an association of Greek artists, which includes painters, musicians, poets, authors and dancers and so on).

The exhibition was mounted at the “Flizvos” cultural centre in Paleo Faliro, Athens, Greece and was very well attended, especially in the evenings, as every evening saw a different performance. The building itself is round, and was a lighthouse, so is very close to the sea. The paintings were displayed on both floors of this building, with the larger canvasses hung on the second floor.

There were examples of many different genres of art, from the dreamy realism of Vasiliki Tambouri’s harbour scene to the abstract works of Spiros Amerikanos, and the symbolism found in the works of Vasileios Arapis, and the larger work which Vasiliki Tambouri also displayed. There were also examples of religious paintings, iconography, portraits and new takes on traditional Greek scenes. Donna Roumeli took inspiration from mythology for her painting, “Gaia” which is one in her series of works of Greek goddesses.

Technosfaira  mounts exhibitions every three months, and has done so since its inception. It began with Vasiliki Tambouri, its president, who had cherished a dream for many years of establishing a community of artists who could work together and take Art to more and more people, while sharing the ideal of people living in peace and harmony. Technosfaira is her first attempt to realize her long-held dream.

Certainly the fifth exhibition had something to appeal to everyone during the week it was held. There were singers, a belly-dancer, pianists and a whole host of others who read their poems and parts of their books. It was gratifying to see so many people attending such an exhibition every evening. There were paintings which appealed to virtually all tastes and for once there was no central theme to the exhibition which was called “Free Voices.”

Some of the paintings symbolized the crisis and the feeling that the artists’ beloved Greece is being ravaged. Red, the colour of blood dominated those paintings and others were black and dark, but with a central inner light of hope. The artists are the antithesis of the neo-fascist movement in Greece.

If you are thinking of a holiday in Greece, and appreciate art, you could check the Technosfaira Omada’s Facebook page as well as www.vtambouri.blogspot.com, which will both give details of forthcoming exhibitions.

For more information on Technosfaira in English, there is an article on Suite101’s website which will explain it in more detail.