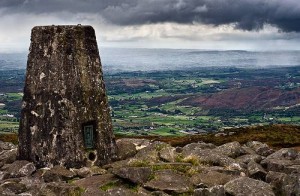 The trail up Slieve Gullion takes the hiker to 1,880 feet above the Irish Sea affording views of the Mountains of Mourne, the Cooley peninsula and miles of green Armagh. The two-mile long trail to the top of Slieve Gullion begins almost half way up the mountain in Slieve Gullion Forest Park approximately five miles southeast of Newry, Northern Ireland. The hiker can take Bus # 43 from Newry which stops at the entrance the the forest park or drive to the forest park and proceed approximately one mile past Slieve Gullion Courtyard Shops and through a beech/pine/spruce forest plantation up to the second parking lot where there is ample parking for forty or so vehicles. The starting point of the trail is 800 feet above sea level. Hikers should sign the register above the parking area. The best times to climb Slieve Gullion would be from late April through late October. There are no man made hazards on the trail.

Ireland Has a Very Damp, Cool, Rainy Climate, Even More So at Higher Elevations

Be aware that Ireland has a very rainy climate and even rainier up on mountain summits so the hiker should have adequate rain gear. The worst times to climb this mountain would be from November through mid-April when the trail could be covered with slippery ice and snow. Though the late fall and winter temperatures may be in the thirties, it feels like zero degrees to someone from a drier climate.

A Landscape of Heather, Bracken Ferns, Cotton Grass and Bulrush

Once the hiker is under way up a very steep trail, she will be treated to rich scents of coniferous forests below and acres on end of craggy heather, purple in color, and bright orange bracken ferns and rushes and grasses that hiss in the winds from the sea far below. Within a quarter mile of the trail head there is a stone shelter with a display sign that provides some information about the legendary giant in Irish mythology named Finn MacCool (Fionn MacCumhail).

Legend has it that Finn MacCool built the Giant’s Causeway up on the seacoast of Antrim in order to cross over to Scotland and fight his rival Benandonner. Finn once wandered over the same landscapes that the hiker sees before him. It is up here that he encountered a witch named Calliagh Berras who could change herself into a hare. More of this legend once the hiker stands near the top the mountain. If the hiker is climbing in August or early September, he will be able to pick off the vines very tasty bilberries (much like blueberries) that grow all over the upper slopes. Perhaps Finn MacCool had a hankering for bilberries. The trail does wind through occasional boggy areas, so it is important to wear waterproof boots.

Slieve Gullion is the Eroded Remains of a Paleocene Volcano

As the climber approaches the summit, she will see from time to time reddish-black rocks of ancient volcanic ring dykes. Slieve Gullion was once part of a massive volcanic zone over 50 million years ago. Legend has it that as recently as the late twelfth century when King John of England came over to hunt on the Cooley Peninsula, he was frightened away by a sudden cracking open of the earth with a flow of red-hot lava near his castle in Carlingford within view of Slieve Gullion.

Birds abound here on the upper slopes. Be on the lookout for squawking crow-size black choughs with bright orange beaks. White willy-wag tails and magpies also can be seen on Slieve Gullion. Within just a hundred feet of the summit, the hiker will come to a giant neolithic passage grave several thousand years old. S/he can walk inside this grave as sunlight easily pokes through cracks in the rocky slabs. This grave is called Calliagh Berras’ House named after a legendary witch who could change into a hare. It is she who tricked Finn MacCool into swimming in a small lake near the summit to have his jet-black hair change to frosty white that remained this color until his death.

From the grave cairn, it is an easy ramble to the summit of Slieve Gullion. From the stone pillar, the hiker can see into five green counties of Ireland veiled in delicate mist, including the Mountains of Mourne. It some ways the view looks a bit like coastal Alaska. He can also enjoy views far out into the Irish Sea, and if it happens to be a crystal-clear day, the hiker may just see with binoculars the summit of Mount Snaefels on the Isle of Man. The hike may take up to three hours (round trip) depending on how many pictures are taken. The vertical gain from the trail head is 1,000 feet. Bring sufficient water as there are no water sources on the trail nor are there any restrooms except at the bottom of the mountain. You can download a map from the web page of Northern Ireland Forest Service or purchase one back at Slieve Gullion Courtyard shops near the entrance to the forest park. 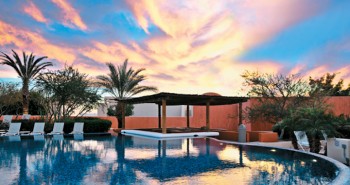 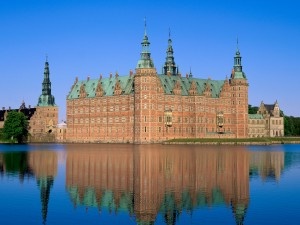 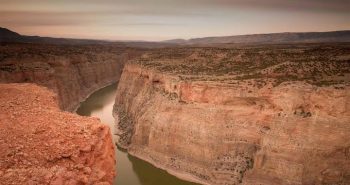