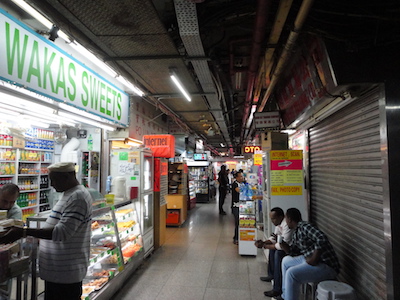 We arrived at the Hong Kong International Airport on Thai’s AirAsia without much incident. Everything seemed to be moving along well. Because I had an injured leg and walking wasn’t the easiest of tasks, we didn’t want to take the cheaper route (about 60HKD) on the MTR that offered two transfers and unknown amounts of walking with all of our luggage. We decided to take a taxi into Tsim Sha Tsui since it would cost nearly that much (240HKD) on the Airport Express direct to Hong Kong and then transfer to the red line to Tsim Sha Tsui (220HKD), which was the easier MTR route.

As the taxi drove down Nathan Street, which is one of the main streets in Kowloon across Victoria Harbor from Hong Kong Island, we were amazed by the double-decker buses and major shopping labels. It seemed as if we had picked a lovely area to spend our evenings in Hong Kong after exploring other parts during the day.

It appeared that luck was with us when the taxi driver seemed to know where Chung King Mansion was located. Our hotel was called Australian Guesthouse, sharing the address of said mansion. When we arrived, the entrance was all a-glitter and wasn’t hard to miss. We were definitely in the heart of things.

Once inside the entrance, everything becomes clear. There are men in the front trying to get customers to book at their ‘guesthouses’. The men are rather persistent to the point of swarming and getting in your face. One such guy, who happened to be Indian, grabbed my boyfriend’s arm to get his attention. This did NOT go over well. When my boyfriend pushed back, the man dropped and broke his cell phone, which caused him to explode and tempers to flare.

The next thing I imagined was  having to go to the police station or worse, the hospital, on our first night in Hong Kong as the Indian man runs his mouth challenging my boyfriend to show him how tough he is. There was nothing I could do, but stand by and pray that it wouldn’t escalate. Luckily, the other men finally put a stop to it and separated them. The Indian man continued with his New York high-school style insults and  F-bombs reversing at us as long as he could be heard.

Mostly, it made me laugh.

To get us out of the way we were put in a line for an elevator bank. It seems that Chung King Mansion should be more accurately described as a building with many hallways that are called guesthouses, which then break off to rooms the size of maybe a ten-tatami mat room in Japan or as we fondly referred to our room – the jail cell. There are different elevators that stop at either the even or odd-numbered floors, which house up to two or three different ‘guesthouses’. I realized after waiting a couple of minutes that our guesthouse name was not on the board and so we asked someone about it only to discover we were standing at the wrong bank of elevators – of course.

Once we found Block D and stood through two rounds of elevators coming and going (they only hold about six people without luggage per trip), we finally made it to the 16th floor where the Australian Guesthouse is located.

Now, when you hear the name ‘Australian Guesthouse’, you might expect that the proprietors would be Australian or have some  connection to Australia. It is wise to keep in mind the general population milling around the area  Indian and Pakistani and this means that common sense does not always apply.

So, the proprietors of the Australian Guesthouse were twin brothers from India. All of the staff working there were Indian. Not quite what we expected from Hong Kong – a modern Chinese city.

The good news is that we were only booked for five nights and were able to endure the displaced neighborhood. Everything else around the Chung King Mansion was as expected except for street people offering my boyfriend a Rolex or some other back-alley product.

In any case, if you’re looking for a cheap place to stay in Hong Kong, which is a difficult task, and you do happen to find a ‘guesthouse’ with an address in Chung King Mansion – just be aware of the reality of the situation! 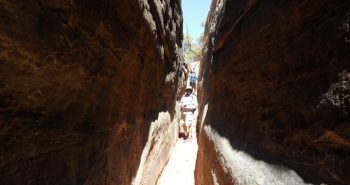 ot long ago, four of us (John, Dorian, Pete, and I) camped and hiked for a few days in Canyonlands National Park, Utah. We set up camp high above the...

Students Dine in Splendor at Buca Lapi in...

Story: On my first ‘grand tour’ of Europe, many years ago, two of my school friends and I were in Florence. We decided to have...