Black Canyon of the Gunnison : A Place of Wonder 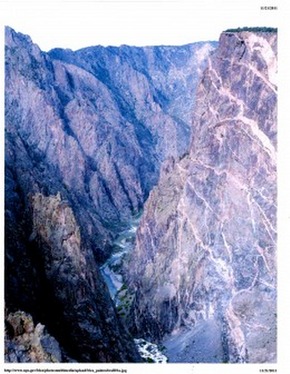 Maura and I drove for two hours east of Grand Junction, Colorado through pinyon pine, juniper and sagebrush country ever upward to the rim. Suddenly out of nowhere the astounding Black Canyon appeared before us. The gently rolling sagebrush slopes came right up to a knife edge rim at 8,000 feet and dropped 2,000 to 3,000 feet straight down to the Gunnison River slithering in hidden depths below.

Here at Tomichi Point, the first of eleven overlooks along the Park Service road, I had for the second time in my life totally lost my sense of perception–the first time being at the Grand Canyon of Arizona. The dull roar of the milky green Gunnison River below us, blending with the chirping chickadees and squawking jays, created a surrealistic atmosphere. Were we on the same planet? Only the distant West Elk Mountains made it seem more earthly.

This canyon is the deepest canyon to be so narrow (at one point it is only 1,300 feet wide) on our entire continent. Because it is so inconceivably narrow, the tiny green ribbon of the Gunnison River appears to be nothing more than a trickling rivulet when it is actually forty feet wide. What appears to be foaming rapids are actually waterfalls over thirty feet high. What appears to be a stony river bed is actually strewn boulders the size of box cars. The human eye becomes totally inadequate in reporting to the brain what it perceives. If one goes to every lookout along the winding road for ten miles, I will guarantee him that he will be baffled mentally and physically for the rest of the day.

There are several geological periods responsible for the formation of this enigmatic canyon. The hardest of rocks (gneiss, schist and granite) were formed scores of millions of years ago (the Pre-Cambian Period) by tremendous heat and pressure accounting for their crystalline texture (see image). Later great quantities of sand and mud were deposited to form sandstone and shale over the older rocky surface. Eventually the entire region was uplifted and the ancient Gunnison River carved deeper and deeper (on its way to the Colorado River) into the softer shales and sandstones exposing the hard core of gneiss, granite and schist.

After camping under the stars, Maura and I got up early the next day and walked along the trail out to Devil’s Overlook. The West Elk Mountains glowed pink in the rising sun while the pine and juniper trees strongly scented the morning air. Somehow I could no longer believe that I was in a place called Colorado, especially after ambling along for a half mile or so when we approached the railing to look down into a pale blue abyss echoing the thunder of rapids far below. The scene called to mind Edgar Allan Poe’s description of the “hideous crags” of the stormy Norwegian coast in his story “A Descent into the Maelstrom.”

The overwhelming amount of jagged, pinnacled rock dropping straight off into dizzy depths slowly evolved as the sun climbed in the sky into a chiaroscuro of light and shade in the brilliant morning light. Across the canyon, we could see a winding dirt road that led straight to the canyon’s edge. I couldn’t help but think of the movie “Thelma and Louise.”

We continued trekking onward to the highest point on the south rim–High Point Overlook at 8,400 feet. From here we peered down into the many side gorges that formed tributaries of the canyon. These gorges must have been previously composed of less resistant rock. Down toward the base of the canyon we saw huge pinnacles jutting up out of the dizzy depths below. They were created by millions of years of erosion that eventually isolated big segments of rock here and there. Sturdy Douglas fir trees kept their foothold by growing inside grooves at a precarious tilt. Almost every rock along the rim was covered with green, yellow and orange lichens as though the canyon were not wondrous enough! 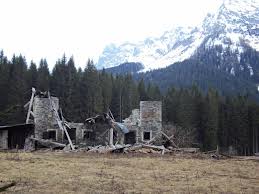