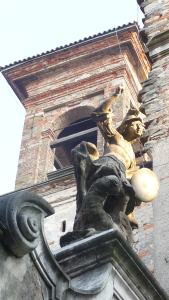 Given its close proximity to the busy Milan Orio al Serio Airport, it is surprising to find that the medieval town of Bergamo is still such a well-kept secret. With sights such as Verona’s Arena, the Venetian canals, Milan’s fashion houses and Tuscan wineries, Northern Italy’s appeal is timeless. Attracting crowds all year round, it is often worth exploring other beautiful but lesser known locations before they are also discovered by the masses. Bergamo is such a place.

Separated into two parts, Città Alta and Città Bassa, the former is the more attractive of the two. Whilst Città Bassa offers a wider range of shops, it sits in the shadow of its better half in more ways than one.

Perched on the hillside, the Alps form the backdrop to Città Alta. Only accessibly by a steep footpath or a funicular to non-residents, this walled town magnificently combines grand Italian architecture and culture with small, rustic bars and café’s. It offers a real insight into Italian life; nodding to the past, enjoying the present and not in a hurry to get to the future.

A Taste of Italian Life in Bergamo’s Città Alta

Cobbled, winding pavements lead to various pasticcerias, art shops, glamorous boutiques, opulent churches and museums. They have even squeezed in a cathedral and a university. There are old fashioned stores and traditional delis filled with local produce; taleggio cheese, polenta and casoncelli (a speciality resembling ravioli). Of course, there is also the wine.

The locals can be found enjoying the traditional Italian card game, Briscola, on the Piazza Vecchia which is also home to Bergamo University. Despite being frequented by students, it is unusually peaceful and quiet; undisturbed by traffic and, so far, an abundance of tourists. Back in the day, it was largely visited by artists and musicians. French architect and writer, Le Corbusier, named this piazza as one of the most beautiful squares in the world.

Culture and Places of Interest

There is no sense of urgency in the high part of this old town so, despite its small size, it would be easy to while away a few hours relaxing here. However, tourists looking to capture some sense of this town’s history will not be disappointed either. The Palazzo della Ragione connects the Piazza Vecchia to the Piazza del Duomo. Occasionally it is possible to take the staircase up the Campanone, or the civic tower, which, standing 52 metres high, offers some breathtaking views. On the other side of the Palazzo sits the cathedral and the dramatic Basilica di Sante Maria Maggiore, which was built in the 12th century.

Bergamo is the birthplace of composer Gaetano Donizetti and the Donizetti Museum on the Palazzo della Misericordia is dedicated to both his memory and his work. Other museums include the Archaeological Civic Museum and the Natural Science Museum.

How to Reach Bergamo

The lower part of Bergamo is less than 55 km from Milan, under 10 minutes from Orio al Serio Airport by car and just 15 minutes by a regular shuttle bus. Città Alta can be reached by bus 1a or the funicolare and is well worth a visit. 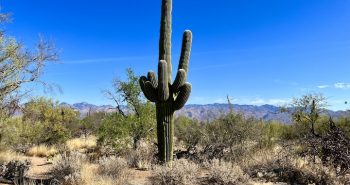 A Day at the Saguaro National Park

Saguaro (pronounced “suh-wah-roh”) National Park located near Tucson Arizona is one of a kind national park. It is the home to the...