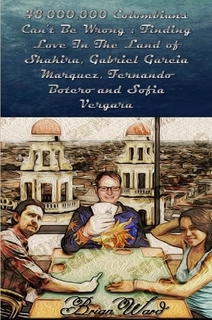 When the country of Peru is mentioned, one imagines a peaceful scene of an Andean alpaca grazing along an Incan stone wall. When Ecuador is brought up, we imagine a rain forest panorama of frogs jumping off branches while butterflies mate in the background. When Colombia is mentioned, we envision a post-apocalyptic city full of overturned buses, being pillaged by men in ski masks. It is obvious which country any rational person would seek to avoid while searching for an internet bride.

“48,000,000 Colombians Can’t Be Wrong” is a true adventure story about a 37-year-old socially-awkward man who decided that the best way he could deal with a life sentence of microwavable burritos and 10-hour Facebook marathons was to look online for a girlfriend in Colombia and then hop on a flight to Colombia’s capital in pursuit of a woman he has never met.

During his first month in Bogota, Brian falls in with two white, self-assured backpackers who the author describes as, “…not the kind of guys who pump the brakes before going through an uncontrolled intersection.” He is then nearly kidnapped during an encounter with a woman he met online, almost becomes business partners with a Korean man in the “diamond business” and is forced to sleep in the DVD room of his hostel due to lack of funds.

Brian quickly regroups after his first month and auditions for the part of “congressional aide” in a Colombian feature film called “Left To Die.” He then lands a job as a writer for an English-language newspaper where his first interview is with a “suspected undercover CIA agent.” Brian then gets thrown off a TV set for refusing to take off his shirt from under his police uniform. While Brian is not getting thrown off TV sets, he marvels at all the discarded construction materials Colombians throw into pot holes to lessen their depths. Because of this strategy, a bus going over one of these open trenches (full of construction materials) will occasionally sling a chest-high brick through a group of panic-stricken pedestrians.

Brian sincerely believed this trip would put him on a track towards a life of excitement, intrigue and exotic women, far from his increasing first world debt. Instead, he unexpectedly falls into a job as an extra in a Colombian soap opera, has panic attacks, watches other gringos lose their marbles and blows half his paycheck on bootlegged DVD’s. Along the journey, he chronicles his friendships, the deranged ex-pats he meets, and his struggles/triumphs, including one fateful night in a Israeli restaurant that would change his life forever.