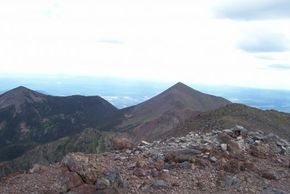 The skies were a bit cloudy and it was cool in northern Arizona. We arrived in a much hotter Page, Arizona where I gave a talk on John Wesley Powell’s ascent of Longs Peak, Colorado in 1868, one year prior to his exploration of the Colorado River in cedar boats. On this day we would climb Humphreys Peak (12,633 feet), the highest of the San Francisco Peaks and the highest in Arizona. It was now over a dozen years earlier after our wintry ascent of the San Francisco Peaks in waist-deep snow where we struggled to get within three hundred vertical feet of the high point (described in my book Breaking Through the Clouds). But on this day, a few days short of my seventy-first birthday, I and two new friends, Jim Ledbetter and John Sullivan, still in their fifties, remained confident that we would summit Humphreys Peak. We shouldered our camel-packs filled with water and sandwiches and energy snacks and began our ascent through a meadow of purple lupines and black-eyed susans blowing in the wind. The dark pyramid of Humphreys rose above by some three thousand feet–we knew we were in for a long day.

As we entered a sweet-smelling pine forest, we couldn’t help but notice dozens of dark-brown mushrooms springing forth along the trail. Plant communities of white columbines and penstemon grew in profusion. We heard both the screeching of a chickaree squirrel and the jack-hammering of a sapsucker in the branches above. It was at this point that the trail began to twist upwards with numerous switchbacks helping us gain elevation and broad-sweeping views of volcanic terrain in the distance. As the trail grew steeper, we hopped over exposed spruce roots and lumpy rocks until we at last gained the saddle not far from where we stood in deep snow years ago. We looked across at Agassiz Peak that is closed to climbers to allow for sacred ceremonial plume planting by Hopi runners whose hope it was that this sacred ceremony would foster a fruitful crop of corn. Corn is the true gift of the rain-bearing Kachina spirits who dwell in the San Francisco Peaks.

We could see that there were at least three or four false summits that must be gained before the final push up Humphreys Peak. I followed slowly after my younger companions, so slowly that one of them went on ahead to make the summit. He greeted the two of us on his way back! Somehow I lost my balance and jammed my left boot down on a rather hard and pointy piece of black lava. I Jammed my boot so hard that it bruised my arch bone. I just had to stop to get control of the pain. Would I be able to summit? I stood only a few hundred feet shy of that high peak in the sky. No way would I turn around! I hobbled slowly to the top and high-fived it with my friend who was just a little bit ahead of me. In pain still, I took in the vista of the North Rim of the Grand Canyon and the great desert lands of the Hopi. Not at all hungry, I succeeded in forcing down half a sandwich and took long swallows of water. Clouds built up. No thunder, though. But, nonetheless, we began our slow, slow descent. Our friend was somewhere far below taking photographs. Jim’s knee began to bother him and we wounded ones hobbled at times and carefully sat down to go through rather steep crevices on the seats of our pants. This process went on endlessly until we finally entered the forest zone. But this old trail seemed rockier than ever.

Surely it wasn’t that way coming up! Ah, those switchbacks! We lost elevation slowly but surely. Jim got about fifty yards ahead of me but every five minutes shouted “Dick, are you okay?” “Yes, I’m getting there,” I answered. For miles I continued to respond to his single question until we caught up with some Italian hikers who had run short of food and water. We offered them some food and water and continued ever downwards with our European companions. They all got slowly ahead of me as I hobbled down, down, down. The Italian woman of the group looked back to check on me every so often until we entered that blessed meadow with the black-eyed susans. As I climbed into the car, both John and Jim said to me, “We hope we can do this when we’re seventy-one. I felt pretty good after hearing those words! 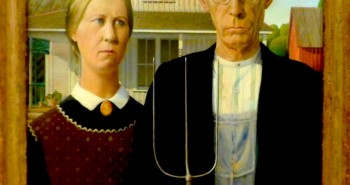 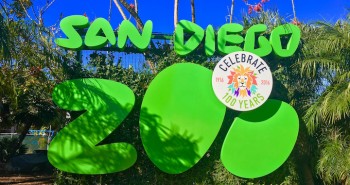 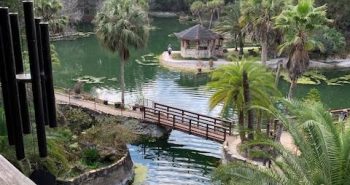