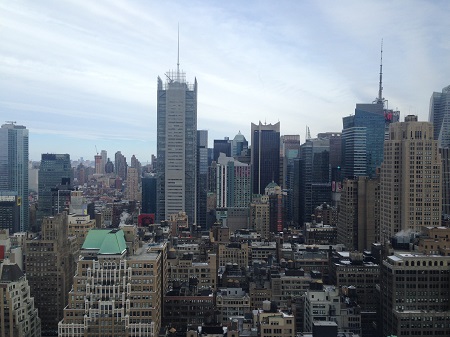 My wife, Maura, daughter Michelle and I took a quick dash from West Nyack into New York City for my daughter’s business meeting at Penn One Plaza. Her appointment was on the 36th floor and, as her parents, we were permitted through security to accompany her up to the reception office. Once we arrived, my wife and I were utterly amazed by the view of the new World Trade Center we saw through a meeting room from the reception. I told Maura to take some pictures with her i-phone, but she was disappointed with the results due to reflections in the double set of windows.

A very pleasant Eastern European receptionist, named Ewa (pron. Ava), asked: “Are you from New York?” After we replied that we were from Denver, Colorado, she immediately said, “I’ll let you in the empty meeting room so that you can take better pictures.” When we entered, she told us to stand up on the ledge next to the window and place the i-phone directly on the glass in order eliminate the interference of reflections. Maura followed her advice and took several photos of the World Trade Center, which looks like a mighty fortress, the harbor with the Hudson River and a tiny, green toy statue called the Statue of Liberty. 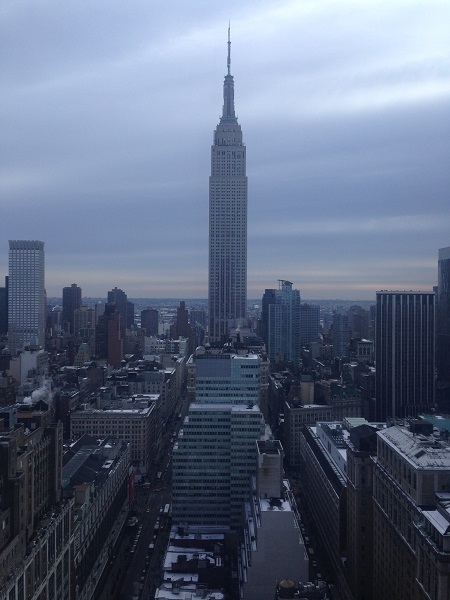 “Would you like to see the City from more offices?” she asked. “Of course!” we replied, and she happily led us down a hall to a window facing directly north to the Empire State Building—nothing obscured our view for the perfect snapshot. She then took us to another room that offered a view of the old New York Times “Castle,” with its bright green roof tiles, and right behind it a tall, modern building that now houses this major newspaper. Again, we freely clicked away. Ewa led us back to the reception area and offered us coffee and sweets. As we were thanking her profusely for her generosity, Michelle returned from the appointment with her consultant. Despite the bitter cold, we decided to walk back to Grand Central Station some eleven long blocks away. 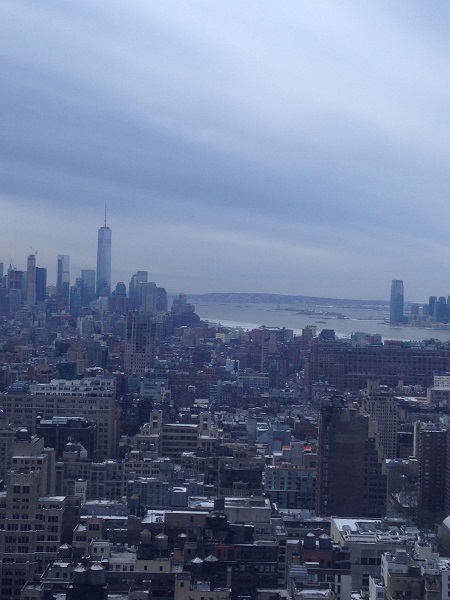 We told Michelle of Ewa’s kindness and showed the pictures we took, all the while chatting about New York and its marvelous wonders over steamy bowls of clam chowder at the famous Oyster Bar in Grand Central Station. We reflected on the City whose works of man grow to incredible heights, with the hope of enhancing the original features of our otherwise wild, watery globe.

John Burroughs, the naturalist of the Catskill Mountains two hours north of the City, once wrote in his book Riverby (1894) that in the Catskills, “all was mountain and forest on every hand. Civilization seemed to have done little more than to have scratched this rough, shaggy surface of the earth here and there. In any such view, the wild, the aboriginal, the geographical greatly predominate. The works of man dwindle, and the original features of the huge globe come out.”