Alcoholism in Oaxaca, Mexico Mezcal; Not Tequila, Beer or Whisky 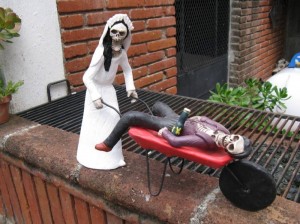 Alcoholics Anonymous has a healthy presence in Oaxaca, Mexico. Alcoholism is not due to drinking beer, tequila, wine, whisky, vodka or brandy. It’s mezcal.

It may be a stretch to assert that for so long as alcoholism remains high in the population of Oaxaca, it will remain a third world state. But it’s difficult to deny that drinking to excess contributes to the economic woes of Oaxaca, one of the poorest states in arguably a developing nation, Mexico. Certainly alcoholism in Oaxaca is a major factor impacting the financial success and advancement of many otherwise productive families.

It’s not tequila, beer, whisky or vodka, and surely not wine, which contributes to the high level of alcoholism and alcoholics in Oaxaca; it’s mezcal. 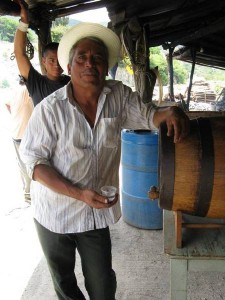 Mezcal is readily available throughout the state of Oaxaca, more so than elsewhere in the capital as well as in and close to Oaxaca’s central valleys. It’s mostly a matter of the cost of the spirit being rock bottom the closer one gets to the source of production. With low cost, comes high consumption – and alcoholism. There are pockets of mezcal producing villages. The top few which come to mind are near Sola de Vega, in and near the Albarradas villages, Tlacolula, Ocotlán, and of course the self-anointed World Capital of Mezcal, Matatlán, and villages within an hours drive of the town en route to the coast.

At the source, one can buy good quality mezcal for as little as 25 pesos (all prices for 2011) per liter (for the benefit of American readers, that’s roughly a quart). And at that price, alcoholics have their choice of blanco (unaged), gusano (“with the worm”) and at times even reposado (oak barrel aged for at least two months). Of course the price does go up, but the point is that it costs virtually nothing to buy quality mezcal with percentage alcohol roughly 45%, or 90 proof.

Cost of Other Readily Available Alcoholic Beverages in Oaxaca

Yes, one can encounter wine for as little as 25 pesos for a 750 ml bottle, but there are a couple of points which mitigate against becoming a wino in Oaxaca. Firstly, wine is often not as readily available as mezcal. Secondly, wine at anywhere close to that price, reds in particular, results in headaches, not that Oaxacan alcoholics are aware of this fact. Thirdly, there’s a tremendous difference between 45% and 12% alcohol by volume, a fact that Oaxacan alcoholics probably do know.

Beer comes in at upwards of 10 pesos for 355 ml, with percentage alcohol roughly 4.5. Beer is a very popular alcoholic beverage in Oaxaca, but at fiestas it’s frequently combined with mezcal.

One can easily encounter low cost “effective” whisky, brandy and vodka in Oaxaca, but for the alcoholic, or alcoholic-in-training, such spirits are simply too expensive, although on occasion one can buy any of the three for 60 – 80 pesos, of course domestically produced, or more pedestrian brands.

Tequila, as well as tequila-type spirits made with less than 100% agave are readily available in Oaxaca and its central valleys. In addition, mezcal-type spirits with less than 100% agave is produced in the state. These products are commercially produced and available in many stores, even Sam’s Club. But once again, nothing comes close to pure mezcal, in terms of percentage alcohol and price.

Effect of Alcoholism & Mezcal on Otherwise Productive Residents of Oaxaca 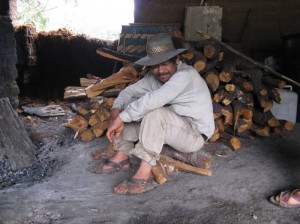 Alcoholic in Oaxaca Paid in Mezcal to Produce It

It is suggested that every middle class resident of Oaxaca has personal knowledge of how alcoholism has affected more than one alcoholic and his family as a result of non-performance of job functions. Here are four examples, names having been changed:

Juan is a producer of high quality pottery in Atzompa. A customer ordered 55 pieces. Juan promised the order would be ready in two weeks, and would call. He failed to call, so the customer attended at Juan’s workshop two months later, only to find some pieces completed, others partially done, yet others not even started. Juan had been on a bender, but promised that the order would be done in two weeks. The customer went elsewhere.

José is a master bricklayer. On Saturday he committed to finishing a job for a homeowner, one of his regular customers, on the next Monday and Tuesday. He failed to attend. The homeowner called José, and was told by his wife that there was a party the night before (Sunday), and that José “slept in.”

Alfredo had a well-paying job at a Oaxaca bed & breakfast. He went drinking on his lunch hour, and upon his return was loud and belligerent towards clients of the lodging. Alfredo’s family had previously pleaded with management to give Alfredo another chance. The establishment fired Alfredo for his alcoholism and its adverse impact on the business.

Fernando is a skilled carver of wooden figures known as alebrijes, a popular purchase item for tourists to Oaxaca. With tourism down, Fernando reverted to his other skills, as a talented handyman capable of doing carpentry, painting and brickwork. An acquaintance of Fernando, an American resident in Oaxaca, was lamenting to Fernando about not being able to find someone to do some sanding and painting. Fernando replied that he’d be by to do the job beginning on Monday. Fernando didn’t show up. A friend of the homeowner, also an acquaintance of Fernando, when told of the story commented that Fernando must have fallen off the wagon.

The foregoing four examples represent how alcoholism in Oaxaca contributes to the inability of otherwise hardworking families to raise their economic lot. Virtually very resident of Oaxaca can recount such stories – a different one every month.

Indeed reducing alcoholism in Oaxaca will not likely have an impact on the state’s third world status. To raise Oaxaca from third world designation into the category of developing nation, or better, requires more. As has been suggested, the social order must have, firstly a rule of law; secondly, which is enforced honestly and fairly across the board; and finally, its enforcement must be at minimum with respect to property rights, of both organizations and the individual.

Reducing alcoholism in Oaxaca, however, would go a long way towards achieving the foregoing end. A sober society is a better educated society; with education comes the realization that government is failing to enforce the rule of law; with that realization comes social and political change, and hence the ability to elevate society, in this case, Oaxaca.

The Russian Orthodox Cathedral in Nice...

by Douglas Clarkson, The article traces the history of the Russian Orthodox Cathedral in Nice, France, describing its design, construction and... 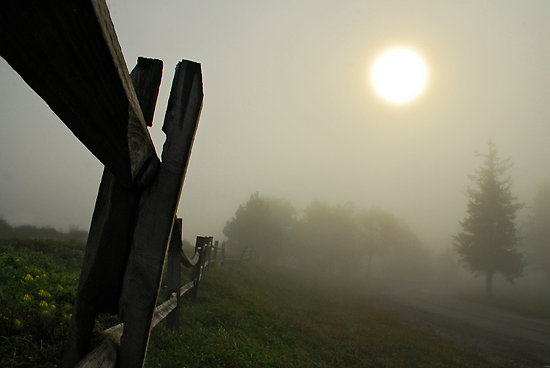 This post is a translation, a creative hiccup of my experience living along the Lange Muiderweg between Muiden and Weesp in the Netherlands. I was...