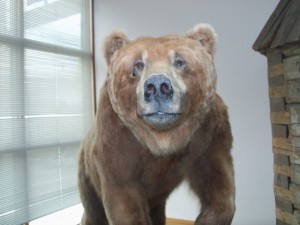 The first night we camped outdoors, Dave called us together right outside the van. This is important, he said. Before anything else, you have to know about bears.

The first thing, there are black bears and brown bears. You have to be able to tell the difference.

(A note: two weeks later, in Anchorage, there was a front-page story of a black bear getting into a middle school. The school went on lockdown. The bear peed in a corridor and tipped over trash to find food. The janitor chased him off. Later wags said he wasn’t packing so he got through the metal detector.)

Brown bears are the ones they call grizzlies. (Everybody in AK talks about brown bears, not grizzlies.) A brown bear could have darker fur but they have round ears, like Mickey Mouse ears. They have a round face. They have a hump on their back. They are not interested in people. The adolescents have some curiosity.

If you see a brown bear, make yourself big. Don’t scream. Don’t blow your whistle. Talk to the bear. Back away. Don’t run. Don’t turn your back. If he grabs you, stay still.

Dave had three cans of bear spray. It’s pepper spray with paint so rangers can identify the bear later. It shoots about 10 feet. He said to take it with us when we peed. Keep it at the head of our tents. If a bear pokes at our tent, he said, get out. You can’t use the bear spray or survive in the tent.

Dave said the spray is more effective than a gun. You have to be a dead shot. A bear will keep on coming with a wounded leg but not with a face full of pepper.

We didn’t come face-to-face with any bears. A campground host came by one morning to tell us a brown bear was seen the night before. He warned all the campers. And all the sites had food lockers and intricate trash can handles that need opposable thumbs as well as the ability to read directions. And posters instructing what to do if you see a bear were posted at way stations and in places like public toilets where they were likely to be read.

Dave had two bear stories that were unsettling. There’s an observers’ station near a salmon run, maintained by the park system. Tourists and families were there, watching the brown bears in the river. Two cubs were playing and a male bit the head off one of them and then ate it. The moral? Nature is not cute.

The other story was of an attack of a group nine students. One of the directions is to hike in groups and talk so as not to surprise the bears. Bears are not known to attack groups of six or more. Until this last year when one did attack. Two students were mauled, but they all made it out alive and the students recovered.

Our camps were scrupulously clean. We carried bear spray. We paid attention to our surroundings. And the bears passed us by.

Relaxing with a mug of tea and a Garibaldi recently after a run, my mind wandered for no apparent reason to handbags; more specifically, females and...