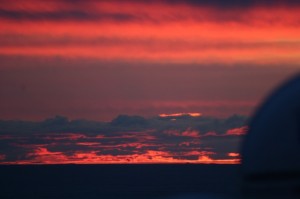 We were on the Alaska Marine Highway ferry for three nights and four days. It was a splendid experience. The first night I slept in the cabin, but I was outside the next two nights, unrolling my mat and sleeping bag onto the plastic chaise lounge. There was a full moon and I woke to see it moving across a sky that grew lighter at night the further north we traveled.

The scenery was awesome. Take a look at Roberta’s and my photos. The Inside Passage ferry route starts at Bellingham, WA, at the southern tip of Vancouver Island. We were warned before we reached the northern tip that we would enter open water and for an hour or so the ship rolled noticeably. Then we wended our way again between islands, seeing lighthouses, villages, and lots of snow-capped mountains as we went further north.

One of the knowledgeable travelers told us our ship, the Columbia, was the best of the ferries for accommodations and outside access. Paulette, Peggy and Roberta saw dolphins and Paulette saw the tail of a whale. But despite several alerts, no whales surfaced.

I had a small but astonishing encounter on the third day. One of the couples sleeping on the solarium deck had written ahead and got an appointment to visit the bridge. The captain was asleep, resting in preparation for a difficult maneuver ahead. Because of the full moon, the tides were extreme and he wanted to be alert as the ship approached Petersburg. It was a bit of interesting gossip.

One of the crew was standing on the prow with binoculars and a headset. As we watched, the man who was standing, who turned out to be Coast Guard, asked complicated questions about angles and approaches and I asked simple questions about low tide and the meaning of the signals and depth measures. The woman with the Ipad answered them all explaining to me how the boat would line up with a signal a hundred yards in front of a light so as to stay in the channel and not run aground. She said it was a one-way passage with no room for the ship to turn around.

Finally we were through the narrows and pulling into the Petersburg port. The crewman turned to away from the prow. The Coast Guard man said, “He’s locking the anchors.” During the approach the anchors had been unlocked so that if the ship got into difficulty, it could stop a little more quickly. And it turned out the husband of the woman with the Ipad is the assistant director of Denali Park. They’d never taken the ferry before and were into the experience just like the rest of us.

We watched one of the passengers we’d gotten to know, Rob, disembark at Petersburg, carrying his kayak to paddle 80 days back to Vancouver. 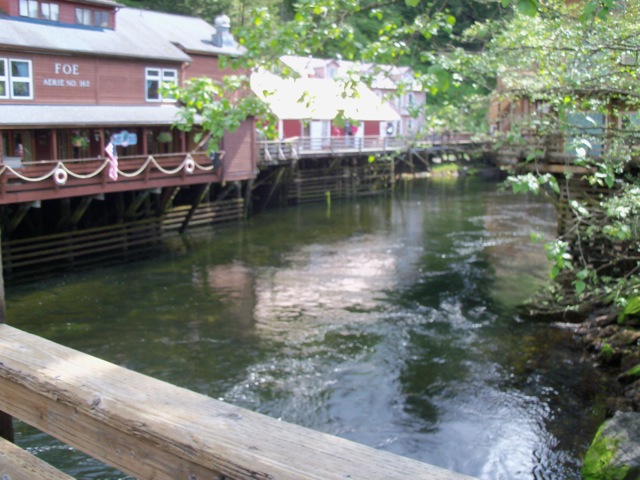 By Mary Ann McGivern June 3 and 4 We had a five-hour stop in Ketchikan and walked the two and half miles into town. There we saw five cruise ships...