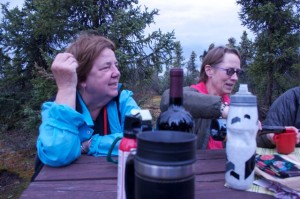 We have contracted with Alaska. Alpine Adventures to provide the food. Here’s the menu.

The group will also bring beer and wine.

I talked with Arron Fetter at AAA and he reminded me that all dinners have the meat added separately. So the Chicken comes separate from the Satay sauce, same for the Teriyaki. The lunches feature salami and  ham which can also be withheld. The Lunch spreads are hearty and are usually accompanied by cheese and onion, which can make a substantial sandwich itself. The chicken ancho lunch is the only one where the meat is already combined with the spread.

I feel confident that we can accommodate a variety of dietary needs with the menu that AAA has provided.

I wrote a blog about the menu before we left for Alaska. But I could only list the food. I could not tell you how it tasted. It was delicious...

The Russian Orthodox Cathedral in Nice...

by Douglas Clarkson, The article traces the history of the Russian Orthodox Cathedral in Nice, France, describing its design, construction and...