My husband and I spent most of April in Seoul, South Korea. He taught a special course at Seoul National University, considered the most prestigious in the country. We stayed at the Hoam Faculty Guest House on campus, and it was a wonderful opportunity to get to know Seoul better. We have visited South Korea a number of times before, but only spent a few days in Seoul during each visit, as most of our time was spent visiting other parts of this delightful country. 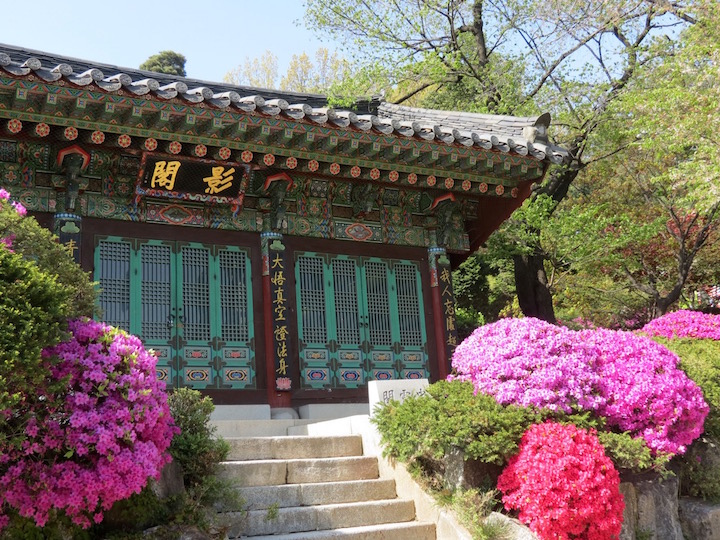 Azalea Temple: azaleas at one of the small temples at the Bongeunsa Temple complex

April was a lovely time of year, as spring was in full bloom. During our first week, the cherry blossom trees were like a cloudburst of pale color over the whole campus grounds; so beautiful that we didn’t want to go indoors. They soon faded, though, but then came huge swathes of bright pink, red, and purple azaleas—more than we had ever seen before. 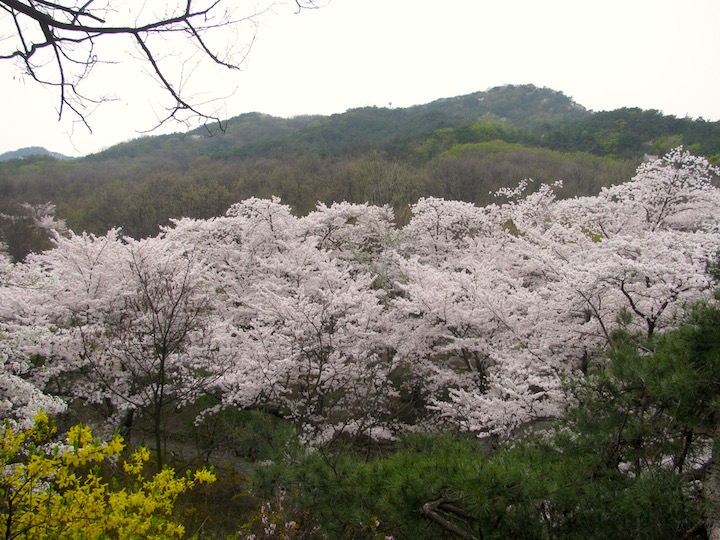 The only negative about the season is the air quality. A combination of pollution and what they call “the yellow Chinese dust” (it blows over from China every spring) creates foggy/smoggy conditions that make it hard on respiratory systems. Many people wear a face mask, and many try to stay indoors, especially on “red alert” days.

Every day was an adventure as we explored new places, talked to local people and sampled many new dishes. Seoul has so much to offer that it’s hard to know where to begin. So, let’s start with a characterization of what we found Seoul to be.

Seoul is huge, densely populated and with a skyline of high rises. The city of ten million-plus is investing in the future but also encouraging a renewed interest in tradition and its long history of over 600 years. This has encouraged diversity, which would have been unimaginable even 10 years ago. For example, there were students from Indonesia, Iran, and Bangladesh in the course my husband taught. 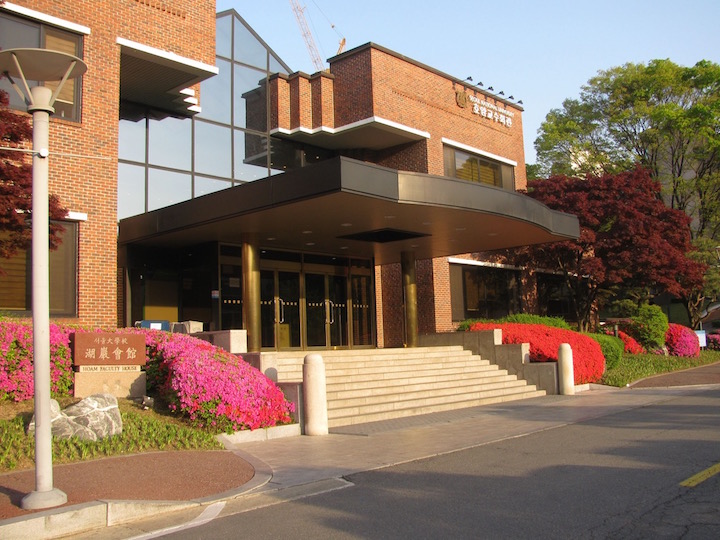 It’s an exciting city to visit, and one that’s fairly easy to navigate as a foreigner, because they have invested heavily in learning other languages, especially English. All public transportation and most tourist sights also have signs in English, and many people have an intermediate level of the language, often trying to engage with strangers in conversation so that they can practice. I experienced this many times on the city’s extensive and wonderful metro system.

Seoul is a city of very friendly, kind people. We had many instances with locals going out of their way to help in some small way, even if they couldn’t speak English. For example, when I got off the bus in the pouring rain, a lady put her umbrella over me and walked me to the metro entrance. People engage a lot with each other in even simple social or business exchanges and often seem to speak quite loudly.

Most school kids wear a school uniform, usually a dark color, and I saw many groups of kids on field trips at museums. Working people are mostly (formally) well dressed in dark suits and uniforms.

It’s a crazy, busy city with horrific traffic, though, but it’s still possible to find oases of peace, quiet, and greenery amid the concrete and modern structures, for example in Unhyeonggang Palace, the Gardens of Bongeunsa Temple, and in the Peace/Olympic Park.

We saw many retired people, especially men, meeting in the parks, such as Tapgol Park near the famous Insadong shopping area. Many sights give a reduction or a fee waiver to those over 65—even visitors like us. 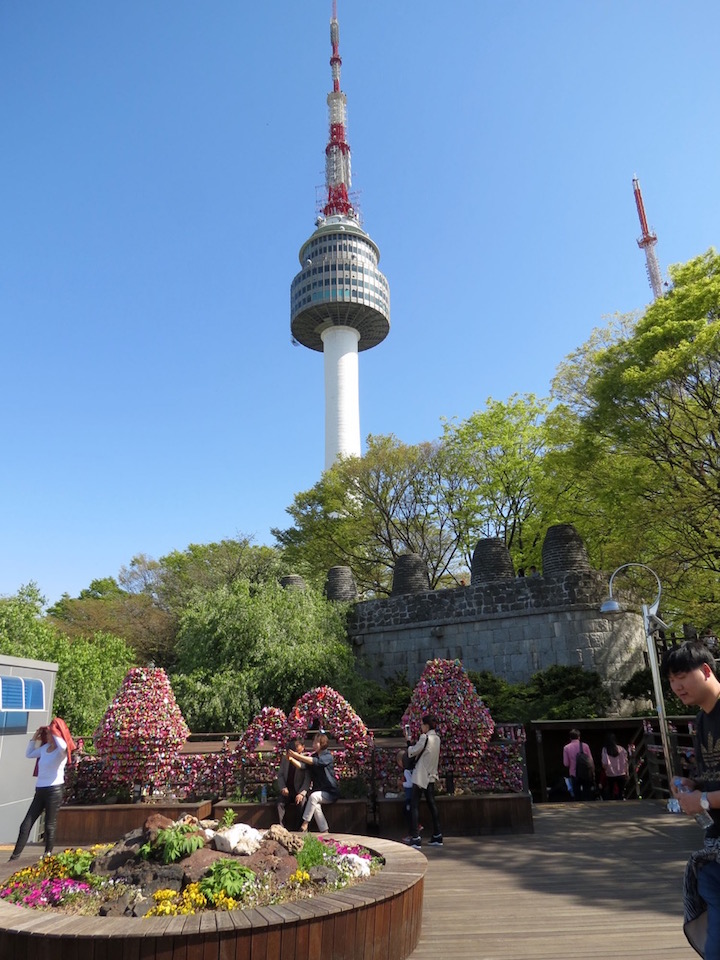 N. Seoul Tower atop Mount Nam. The plaza at the base has “trees” with thousands of Love Locks

Mountains in and around the city and waterways running through it define Seoul’s landscape. Parts of the old city walls on the hills overlooking the metropolis have been rebuilt, and some people like to ramble along them. If you don’t want to walk, you can ride a cable car up Mount Nam to the needle-like N. Seoul Tower, where on a clear day you may be able to see to North Korea. At the very least, you get a grand panorama of the city.

Seoul’s previously neglected rivers are now also “working sights.” The Cheonggyecheon Stream once again flows above ground after a 2005 restoration project, which unearthed it from concrete cover-up. Paths line both sides of the new stream-side park, and it’s very relaxing to wander along in this green space to the sound of gurgling water. 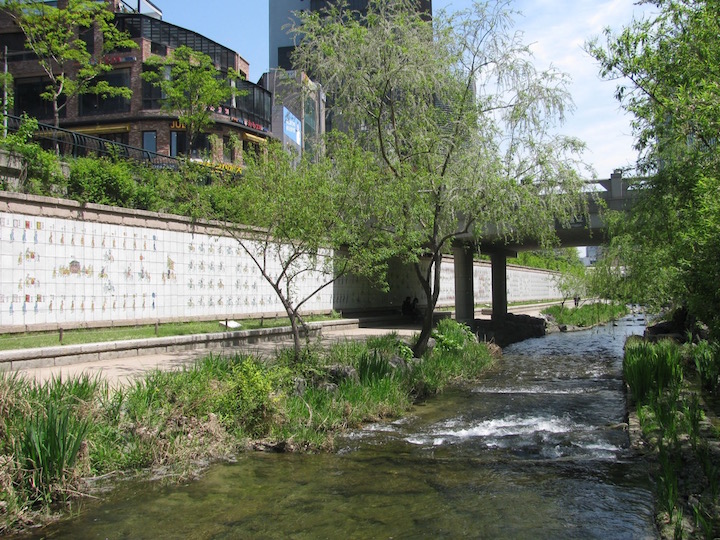 A peaceful to stroll along the Cheonggyecheon Stream. Some of the walls have huge tile paintings telling stories of the Yoseon kings.

Further south, the Han River is now lined with parks and bike trails, and some eye-catching architecture, including the world’s largest artificial floating island, called Yeouido—three linked structures of glass and steel that spring from the river like human lily pads.

Seoul is an interesting mix of old and new, big and small. Much of the city’s skyline is ultra modern, but its celebrated past still lives on in the stately royal palaces. The country’s kings and queens of the Joseon Dynasty lived in these until Japan occupied Korea in the early 20th century, leading to the end of the monarchy. 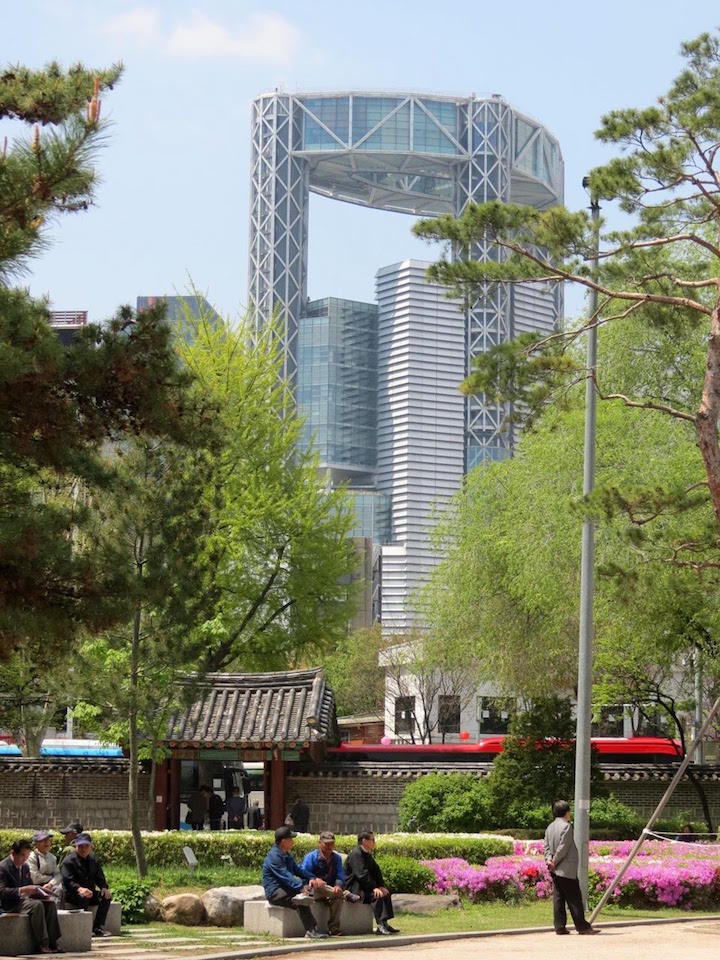 An old gateway into Tapgol Park is dwarfed by the amazing, modern Jongno Tower

The largest palace, Gyeongbokgung, at the foot of Mount Bugak on the north side of the Han River, is as old as Seoul itself. The towering, brightly colored Gwanghwamun Gate is the entrance to this sprawling network of pavilions, passageways, and courtyards. At the center is a large throne room still furnished with royal accessories, such as an ornate wooden throne and banners depicting mountains, dragons and other symbols of long life and power. It’s fun to see (and hear) the Royal Guard Change Ceremony in the first courtyard. 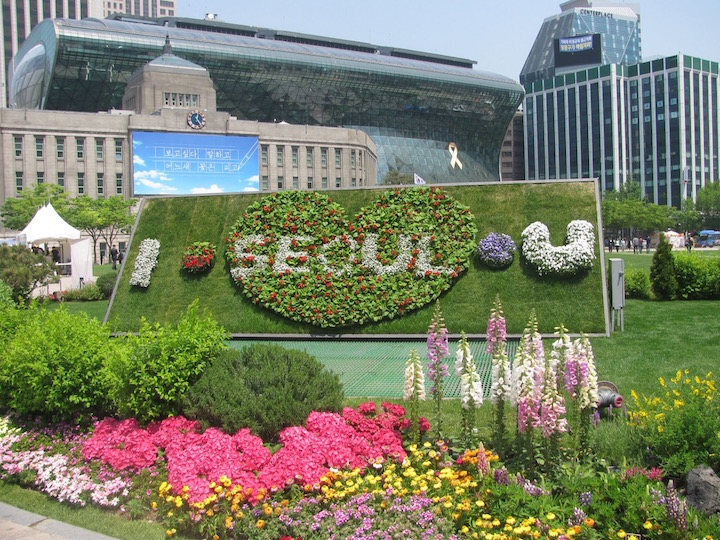 The National Palace Museum, just outside the Gyeongbukgung compound, is a wonderful free museum explaining the years of the Joseon Dynasty in all the various palaces. The exhibition is wonderful, and the number and beauty of artifacts are mind-boggling. It also has a pleasant café. 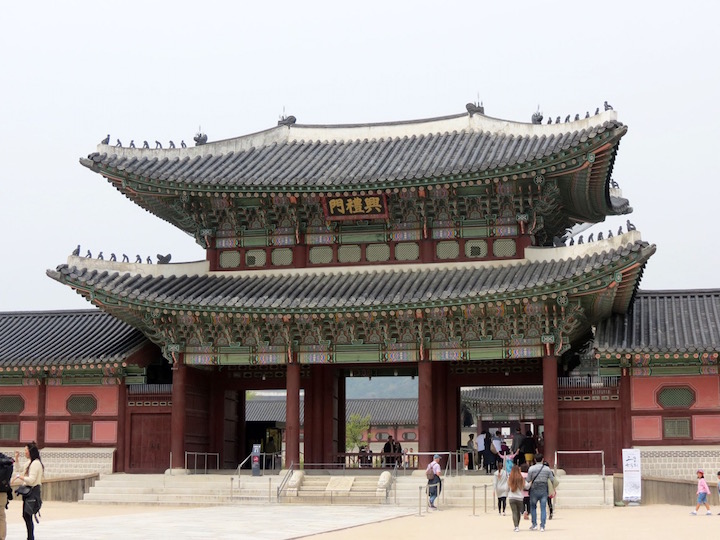 Many people think the palace on the east side, Changdeokgung, is even better preserved. It was named a World Heritage Site for its special traditional Korean architecture. Its unique sculpted garden, called Biwon (or Secret Garden), with ponds, pagodas, and many trees, gives a feeling of tranquility in an often frenetic, urban environment. We really loved this visit.

Roughly between these two palaces is Bukchon Hanok Village. This isn’t a theme park or a museum, but an actual inhabited village, full of hanok (traditional houses), so you can wander around and get a good feeling for Korea’s history and culture.

Many of the hanok now host art galleries, craft workshops, and hanock restaurants. 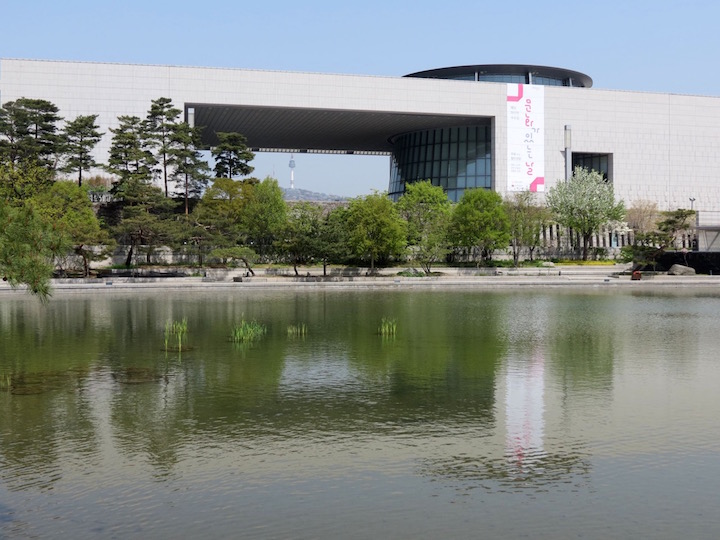 The National Museum of Korea faces the Han River in pretty Yongsan Park. This enormous, modern building houses an amazing collection of art, artifacts, and sculpture from the whole history of Korea, including huge landscape paintings and ornate Buddhist pagodas. Also in the park is the new Hangeul Museum, telling the story of the development of the Korean alphabet (Hangeul), and why it’s been so important in the history of  modern Korea—a fascinating story. Both have free admission.

Seoul has become a huge shopping destination as well, especially for people from other Asian countries. Traditional markets, some centuries-old, still dominate the older districts north of the Han River. They sprawl over multiple city blocks and entice crowds with dazzling arrays of housewares, fresh produce, and cooked snacks—a sensory overload and perfect for bargain hunters (and photographers!). Namdaemun’s stalls burst with Korean specialties such as ginseng and lovely fabrics. Dongdaemun nearby specializes in fashion designs and bulk quantities of factory-produced clothing, shoes, and bags. Insadong is the area for classic art, crafts, and souvenirs: calligraphy and ceramics are often good buys.

Gangnam, south of the Han River, is more affluent and up-market, with funky, stylish boutiques and up-and-coming talent in art and design.

To my happy surprise, we found far less smoking than before, and in fact many public places now ban smoking and some streets have new signs engraved in the sidewalks, saying “No Smoking.”

There’s no tipping in cafes, bars, or restaurants (except the very up-market, or if a server goes to some special effort for something). I have to admit, I find this very relaxing and refreshing, and I can really understand why international visitors are so uncomfortable and confused by the tipping culture in USA.

Korea is also famous for its cuisine, but we’ll have to cover that at another time. 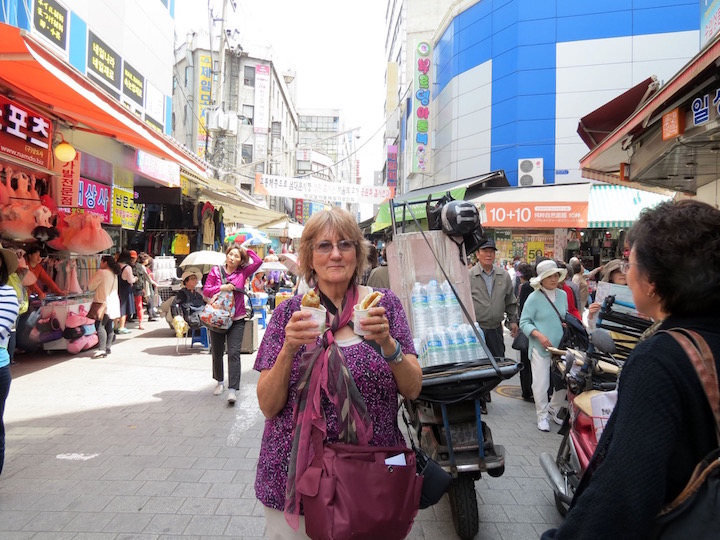 Vivienne Mackie and her husband, Rod Mackie, spent almost a month in Seoul recently and hope to return again soon. See her Korean blog for many more details and stories. 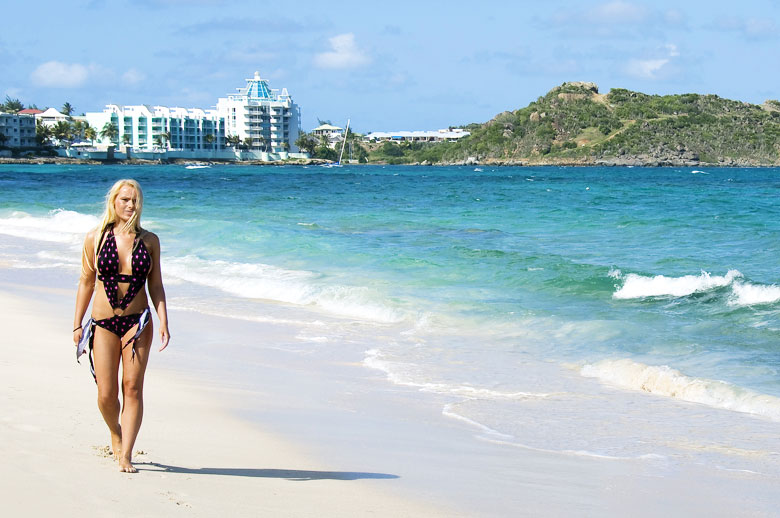 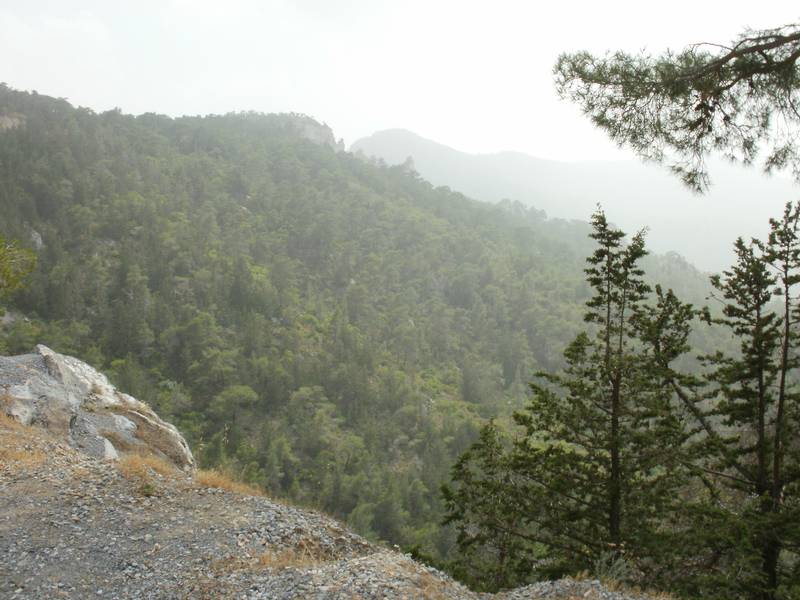