A Land with No Evil: Living with the Karen in the Burmese Jungle 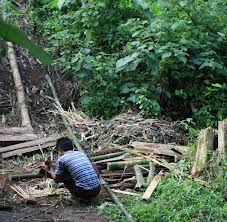 Gathering wild pumpkins in the jungle for food.

A school for Karen youth in the Burmese jungle gives us a glimpse into the lives, hopes and dreams of the Karen people, and their 62-year-long revolt.

The wind blowing through the leaves. The soft chirruping of insects. The gurgle of water in the stream. And the off-key strains of a boy warbling Louis Armstrong’s L.O.V.E. just a few decibels too loud.

Meaning “a land without evil,” Kawthoolei is situated in southern Burma. It is mainly populated by the Karen, an ethnic minority that has been revolting against the Burmese government for the past 62 years. It isn’t actually internationally recognised as a country, but the Karen people see it as their land, their home.

My friend Bel and I had volunteered to teach in a school in the jungle of Kawthoolei, attracted by the promise of a new experience. We didn’t know too much about the Karen people or the situation in Burma, and had very little idea of what we were really in for. We ended up learning much more than we would teach.

The bell that used to be a shell

Set up by the Karen National Union (KNU), the school was in its very first year. The students were between 19 – 23 years old. All of them had finished Standard 10 (the last year of high school) of the Burmese state’s education system, but had not been able to go any further. For most of them, tertiary education in Burma was just too expensive – the tuition fees, combined with the cost of living in the city, could be many times more than their families’ income for a whole year.

In an effort to preserve Karen culture and language, as well as to foster another generation to feed the resistance effort, the school was set up, and teachers invited from around the world to teach a variety of subjects. Bel taught basic English, and I taught public speaking and debate.

Every student had a story. Some had come from refugee camps. Some had come from families who had been internally displaced, their land taken by private companies or by the Burmese military government. Some had seen violence, their villages attacked and burned by the Burmese army, bent on purging the Karen people from the land. And some had come with the intention of joining the Karen National Liberation Army (KNLA) afterwards, to take part in guerilla warfare against their oppressors.

He then crossed the border into Thailand, hoping to find work. But he had been exploited as a manual labourer, then sent back to a refugee camp along the border with even less money than he had started out with. All this before he turned 22.

“I can’t go back to my family anymore,” he told me. “There will be trouble for them if I go back, because I am part of the resistance. I am almost a soldier. So I have to stay away from my family, and my village.”

“These stories are very normal,” said Jane, our interpreter. “Many Karen live this life. Always afraid of the Burmese soldiers. Always afraid of violence. 62 years of revolution… never move forward, never go back. For 62 years it has been like this.”

She gave a laugh and pointed at the school bell as we walked towards the kitchen for lunch. “See the school bell? Look at it carefully. It’s an old shell casing.”

“The cheapest supermarket ever”

Although they don’t usually have much, the Karen are incredibly proud of their hospitality. While we were in the jungle, Bel and I were completely sucked into their family and their routine. No awkwardness, no excuses.

We ate together for every meal: noisy, cheerful affairs of shouting and teasing and joking. The girls crocheted little flowers out of yarn for us to tie in our hair, and the boys tried (unsuccessfully) to teach us to play guitar. At night we talked and prayed in the schoolhouse (many of the Karen are Christians, the first teachers to reach them being mostly missionaries). Then we would go back to the guest house and play rowdy games of UNO by candlelight.

One Saturday we all set off into the jungle together, going out to look for wild fruits and vegetables to replenish the stock in the kitchen. We stuffed canvas backpacks so full of wild pumpkins and cucumbers and eggplants that I could barely lift them off the ground (and yet the boys carried them with ease for the two hours it took us to walk back to the village).

“The cheapest and freshest supermarket ever,” Jane commented as she cut yet another wild pumpkin free. “And everything organic!”

On the last day of November we stayed up all night around a bonfire, celebrating what the Karen called “Sweet December” – welcoming the month of Christ. We played games and did embarrassing forfeits, bonding in a mixture of Karen and English.

Jane sighed as she sat down next to me. “When I see this, I miss my childhood. We used to live and play in the jungle just like this. Then the Burmese soldiers came and we had to go to the refugee camp.”

Jane had spent most of her teenage years in the refugee camp. Her family then moved to Indiana in the United States, as part of the refugee resettlement program. She chose to stay. She hasn’t seen her family since.

She looked up at the trees silhouetted against the light from the bonfire. “I miss my village. I miss my family. I want to go home.”

“I want to go home.” The greatest wish of every Karen.

Note: Some names have been changed to protect the identities of those still living and working within Burma.

If You Are Going to Ireland, Newgrange is a...

Newgrange prehistoric site (also known as Bru Na Boinne) is located just 20 miles north of Dublin near the city of Drogheda in County Meath. You can...

In the Rokko Mountains One day in early October I tagged along with my children to their school at the Canadian Academy, perched on the edge of...