A Day in a Life of a Travel Blogger: Caroline Steman

Sometimes a travel writer’s day is planned months in advance and flawlessly executed, with itineraries, maps, the perfectly packed suitcase, and well-researched ideas. We usually know where we’re going and why.

We may have been commissioned to write about a specific place or event, so we travel to experience the sights and sounds of the destination. Or maybe we need to explore areas for further background to share with our readers, hence we head out to meet local people and get a flavour for an area.

I find this part of the job is always exciting and full of very interesting people. My journey as a travel writer is full of great friends I have made along the way and amazing places that will dance in my memory forever.

Yet, this morning, after an enjoyable evening with family at a pre-Christmas gathering hosted by my husband’s uncle Leo and his wife Faye at their beautiful country home, the four of us decided to clear our heads with a drive so that they could show off the beauty of the area that surrounds their new home. 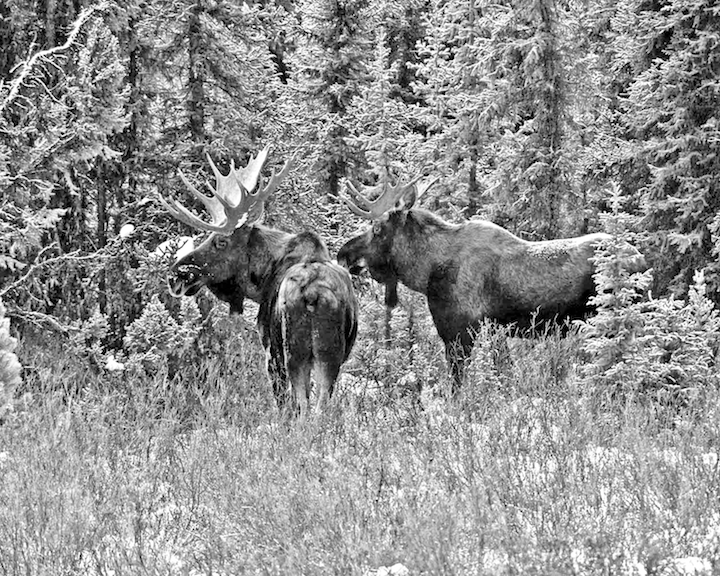 I remind myself every day that I’m very blessed to be a travel writer, and what makes it even more special is that my husband and I have chosen to travel this path together. Gary, who always enjoyed taking photographs, graduated from the New York School of Professional Photographers and supports all my writing with his beautiful, vivid photos. So, it’s not a surprise that even though we didn’t have our travel writer hats on, I never miss an opportunity to write about interesting surroundings near or far, and Gary is always prepared to capture the beauty for work or for pleasure.

And that’s how my first trip to Ram Falls began one bright Sunday morning in December on an outing with family.

We left the small town of Caroline in central Alberta and began our drive over trunk roads that were barren except for one solitary set of tire tracks in the fresh snow, evidence that someone had been here before us.

The rolling foothills were the pristine backdrop to the treacherous roads, and like riding a roller coaster weaving from one trunk road to another and through the pristine Elk Creek Wildlife Sanctuary where I saw my first moose.

As a matter of fact, as we came upon the clearing we counted five of the powerful giants lying on the frozen ground, resting under the warmth of the mid-day sun. At least they were resting until they realized that we had arrived to join them. Our presence disturbed them from their lazy activities and they stood, ready to escape any danger we might present. The awe-inspiring beauty of the lumbering giants is a rare picture that not many can say they have experienced first hand.

It was a lucky bonus that a little further on we also got an all-too-rare glimpse of a weary group of wild horses grazing in a clear-cut area. You wouldn’t even think they knew we had joined them except that they all kept one ear perked, I’m certain, to ensure they knew what we were up to. 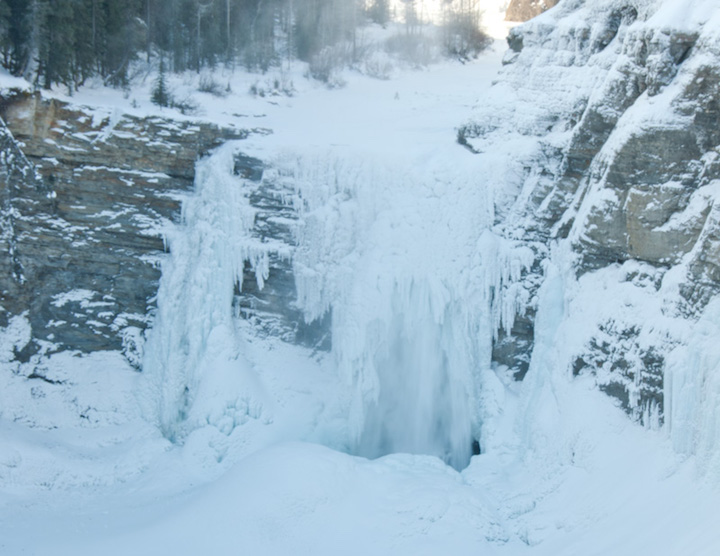 Our drive took us north and after a delicious lunch in Rocky Mountain House, Alberta, a town in west-central Alberta, approximately 77 km west of the City of Red Deer at the junction of the Clearwater and North Saskatchewan Rivers, and at the crossroads of Highway 22 and Highway 11, we travelled a little further west where we came to the parking lot of a dayuse area South of Nordegg.

We got out of the car, weighed down with our winter wear that protected us from the cold of a typical winter day in Alberta, we followed a path that many previous visitors had packed down in the knee-deep snow and ended up at the top of Ram Falls, a scene I had only witnessed in photos.

In winter, nature’s cold breath freezes the 50 feet of falls into a tall, solid wall of ice that hangs suspended against the sheer drop to the snow-covered valley below.

Like the final scene in White Christmas, the horror frost on the bare trees were a crisp contrast to those bright shades of the interspersed evergreens weighed down with bright white tufts of snow, all sparking under the clear blue sky that makes our Alberta winters so special. 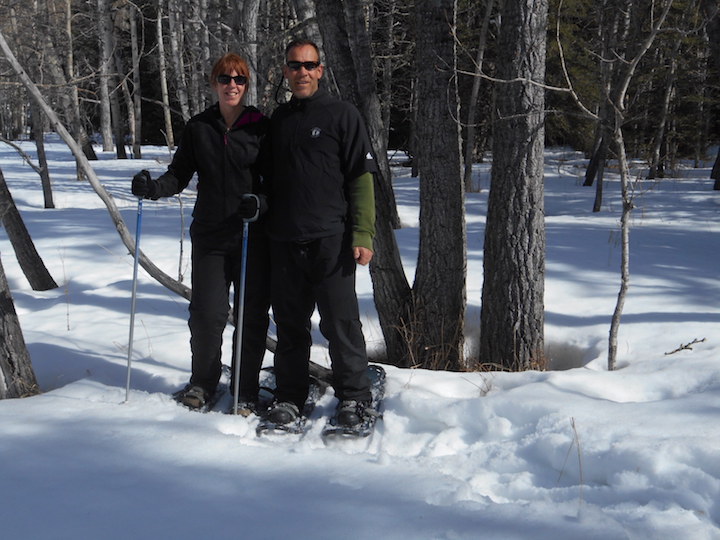 Standing at the top of exactly 133 very-well manicured steps (yes, I counted them), which even in the middle of winter were cleared very precisely, lead visitors down to the edge of the ravine and a viewing platform that provides the spectacular view of the falls and the rugged terrain of the Ram River Valley.

Once we had our fill of the spectacular view, we made our way back to the top of the man-made stairs and followed the path in the opposite direction from where we approached to take in the scenery along the top of the canyon, which is considered by many visitors to be one of the best wilderness adventure destinations in the world.

A day and a scene I’ll never forget are captured in our memories and on film, so it was after we were home again that the work began. The next few days were filled with research of the area and the falls, and another travel article is added to the collection. Yes, we’re truly blessed that our hobby and our livelihood are so intricately intertwined. 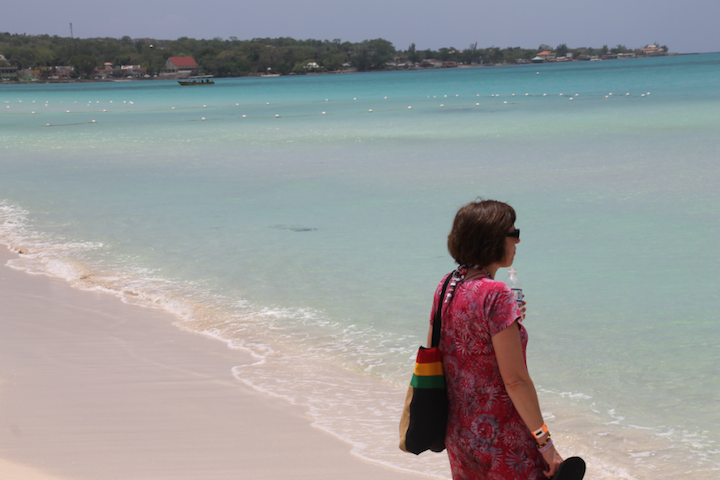 Author bio: Caroline is a ghost blogger for many clients who use her words to draw attention to their own site. She’s a contributing writer on AlbertaTravelIdeas.com and is a published author. Her book Southern Alberta for City Folks is a collection of stories about the natural and man-made wonders found at the end of scenic but simple hikes around her home in the foothills of the Rocky Mountains. The picturesque book is supported by the vivid photos taken by her husband and professional photographer, Gary Steman.

A Day in a Life of a Travel Blogger: Caroline Steman https://t.co/D4MbFDji5q 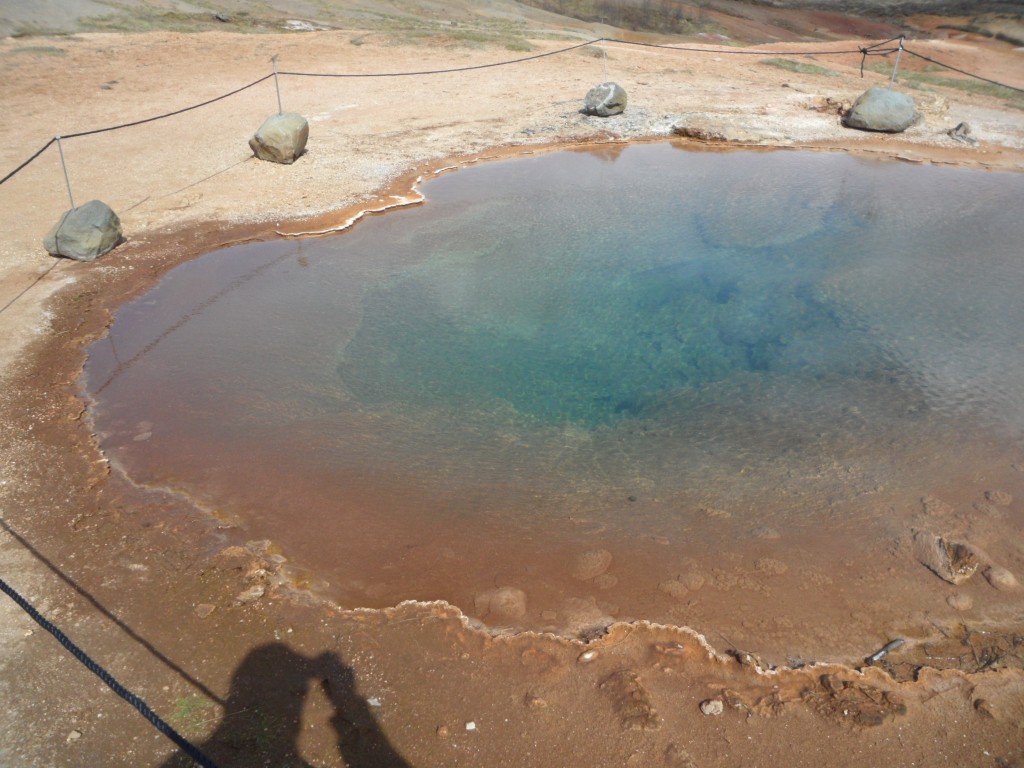 North by East to Iceland: Part 5

Not Coal Nor Oil, But Icelandic Fire Iceland is situated atop the Great Atlantic Rift that is quickly (geologically speaking) dividing Iceland... 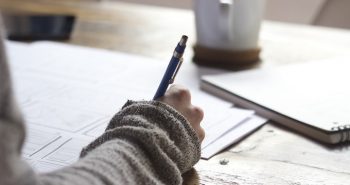