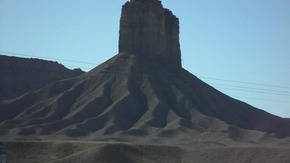 Taking a guided hiking tour along a seven-mile trail in Ute Mountain Reservation is a vigorous way to inspire the mind and body of the canyon adventurer.

The very steep and rocky trail from Mancos Canyon parking area, with a required Ute guide, is an invigorating round-trip journey up the mesa to see at least three Anasazi sites in the southwest section of the table mesa that also contains Mesa Verde National Park. The hiker will gain over 1,000 vertical feet from the parking area at 5,800 feet to the highest point, Hoot Owl Ruins, at 6,890 feet. The hiker needs to carry a gallon of water (eight pounds) and a sack lunch with fresh fruit in order to have sufficient energy to make this seven and a half mile loop.

The Hiker will Experience an Abundance of Canyon Wildlife and Vegetation

As the guide will say to his hiking group, there are mountain lions, black bears, deer, rattlesnakes hawks, cliff swallows, hummingbirds, and bees that might be seen. As a precaution against mountain lion attack, the guide will shoulder a shotgun. Before reaching the first of the site, named “Two-Storey Ruins,” the hiker will see cheat grass (so called because its roots steal scarce water from other plants), cactus, sagebrush, Spanish bayonet (a source of fruit called Navajo Bananas), and a variety of wildflowers. About eight hundred vertical feet above Mancos Canyon lies Two-Storey Ruin tucked within an overhanging cliff. Pieces of broken pottery remain through the centuries along the trail. The ruins were constructed around 1130 AD, having sleeping quarters in the front and grain storage in the rear. Moki steps lead the climber up to the buildings.

Getting to Hoot Owl Ruins is an Adventure in Itself

The guide will lead his group higher up to white sandstone rims where all can see the distant snowy La Plata Range of southwestern Colorado. To climb up to this point, the hiker must ascend a crooked ladder up a steep sandstone cliff where cliff swallows constantly flutter. Once on top, all can rest and eat their lunch, drink cool water and ask the guide questions. Within a short distance, the guide will suggest to those who are young and brave to descend moki steps to see Hoot Owl Ruins directly underneath. The toe and handholds must be carefully found by each descending hiker until he reaches a broad, flat ledge to see this thirty-yard long ruin built in the late 1100s.

The guide will lead visitors through part of a ghostly burnt area of a 28,000 acre forest fire started by lightning in the summer of 2000. The fire uncovered ruins not seen before in nearby Mesa Verde National Park. But soon the group will descend into a side canyon that houses Bone Owl Ruins made of crude, bright red sandstone masonry in the early 1100s. Like the other ruins, Bone Owl contains living quarters and grain storage rooms for corn grown on the mesa tops. These ruins received their name for the skeleton of an owl found there perhaps a hundred years ago by Ute Indians. Be on the look out for rattlesnakes on the rocky trail down to Soda Canyon.

Once in Soda Canyon, the hiker might see scores of distant, ant-sized visitors on the Mesa Verde National Park side when looking down from Balcony House Ruins. It is a long and dry hike from Soda Canyon to Mancos Canyon, the starting point of the trip, but it is a great time to chat with fellow hikers or for quiet reflection. All too soon, the seven and a half-mile hike comes to an end at the parking area.

You may be lost in the city, or just in need for some last-minute travel inspiration. Whether you’re on your bike or travelling in the London... 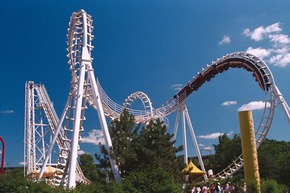 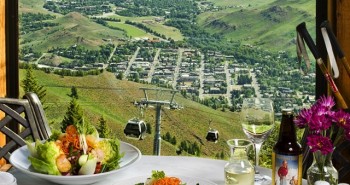 Come with Travel Brigade to beautiful Sun Valley and the amazing Idaho mountains that surround it for a unique summer getaway. Slap on some...